Greetings to all! It's me, Mags! So the other day, Ragnar and I were in Mom's Studio, helping out as we like to do -- you know, being Working Breed pups and all. Anyway, we were entertaining Mom with a round of zoomies when I stopped to check something out ...

"Can't fit."  HA!  Our mom is so funny.  Challenge accepted! And guess what?!? Not only can we fit through that opening, but we can fit through at the same time, going 100 miles per hour! And all without knocking anything over. Sure, Ragnar might have tried to jump onto Mom's lap a time or two, but no harm, no foul!  Besides, she likes to cuddle.

We certainly worked hard that day, my friends!  She's really fortunate to have us helping out.

Hi everybody!  It's me, Ragnar.  I know some of you think that Maggie and I probably work way too hard in our mom's Studio -- and you're probably right.  But we are Working Breed pups, and we are ON THE JOB.  One of my favorite things is Sentry Duty.  Here I am, in action:

We guard every part of the Studio!

It's hard work, but Mags and I are just the right pups for the job!

Greetings to all!  It's me, Mags!  The other day, Ragnar and I went on a little inspection tour of some work our mom and dad have been doing in the backyard.  It was pretty impressive, I must admit.  We even rewarded our mom with some killer poses!  Check this out:

But then ... we spotted something.  And our "full attention" turned from the treats Mom was breaking into tiny pieces to ...

As if we would!
Well, yeah, OK, of course we would.  Knowing that, Mom took us up to the top of the yard and asked us to pose by the gate.

We couldn't help it -- that bun still had our full attention!
Yours sincerely,
Margaret Thatcher
PS:  Our mom has a "no chasing bunnies" rule.  No wonder they like to hang out in our yard!
Posted by The Army of Four at 1:39 PM 3 comments:

Hi everybody!  It's me, Ragnar.  We had a really great walk this morning - it was supposed to be all rainy and nasty out, but it was a beautiful, sunny morning!  When we got to the top of Grand Mère Trail, Mom needed to re-tie her shoes, so Mags thought she and I should hop up on the bench that's right there.  Mom, being ... Mom, thought she should take a few snaps of us.

They WERE the good kind.  Broken in half, but still mighty tasty.  I'm glad Mags and I benched ourselves!

Greetings to all!  It's me, Mags!  Today, while Mom and Dad were getting their lunch ready, I was under Dad's chair and noticed Ragnar was under Mom's chair.  I thought it was time Ragnar and I stepped up our game and sent him a mind-meld message, "Double Chin Rest on 3!!  1 ... 2 ... 3!!!"

I'm so proud of Ragnar.  This isn't easy. 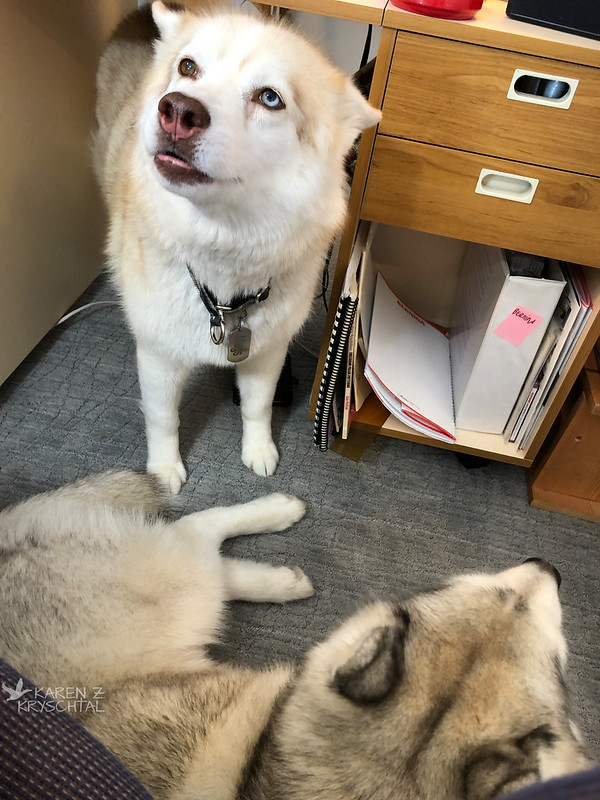 Hi everybody!  It's me, Ragnar!  Yesterday afternoon, Maggie and I were helping our mom a whole lot in her Studio ...

... when I decided to try to hide from Mags  to ask Mom if I could help drive her machine.

I gave in and chased Mags for a while.   It seemed to make Mom happy; she said we were really helpful!  All in all, I'd say it was a very productive afternoon in the Studio!

Greetings to all!  It's me, Mags.  This morning was another chilly, overcast day -- just perfect for a nice, long walk!  For some reason my mom refers to this weather as "unseasonably cold and gloomy", but Ragnar and I love it!  I thought Mom could use some cheering up, so I did one of my famous signature moves:

Works like a charm!  She loves it when I boo at her.  Oh.  And Goldilocks -- I mean my mom -- had cookies, so I scored one each for Ragnar and myself for my efforts.

What a great day!

Greetings to all!  It's me, Maggie.  Ragnar and I did a lot of work yesterday - took our mom and dad on a nice, long walk, supervised them while they worked in the gardens (or maybe it was more like watched them through the windows ...), helped in the Studio, were on kitchen duty -- a mighty active day.  So last night while they watched a TV show that didn't interest either me or Raggi ...

Goldilocks And The Three Bears

Hi everybody!  It's me, Ragnar.  Since you all seem to like my stories so much (Little Red and the Handsome Wolf and Alice in Wonderland), I thought I'd tell you another one.  This came to me on our walk this morning.  It's called "Goldilocks and The Three Bears", and it goes like this ...

Once upon a time, three bears were walking through the forest.  Well, maybe more like across a prairie, but whatever.  You've got the Papa Bear, the Mama Bear, and the Baby Bear.  And a photo-happy girl we'll call Goldilocks.

At that point, Baby Bear decided he should be called "Viking Bear" ... but let's get back to our story ...

Note that Viking Bear was being VERY good -- but we seem to have lost Bad A$$ Bear.  Then Goldilocks had an idea!

Goldilocks asked the three bears to pose anyway, but ...

So the bears ate Goldilocks.

Goldilocks swore up and down she'd make it up to everyone when they got back to  Ao4 Headquarters  their cottage.

So Goldilocks and the three bears walked home. Once there, Goldilocks was true to her word:

And sure enough, when Papa Bear got in from hanging up Viking Bear's and Bad A$$ Bear's harnesses ...

And they all lived happily ever after.
I hope you've enjoyed my story of Goldilocks and the Three Bears!
Sköl!
Ragnar
Posted by The Army of Four at 2:40 PM 3 comments:

Hi everybody!  It's me, Ragnar.  After a hard afternoon of  napping  working in the Studio, it's important to get a good stretch in.

Then it's time to go upstairs and help make dinner.  There may be cheese that needs to be taste-tested.  You never know.

Hi everybody!  It's me, Ragnar.  Mags and I have had a busy morning, and a busy week, and knowing that we have a busy weekend ahead of us ... 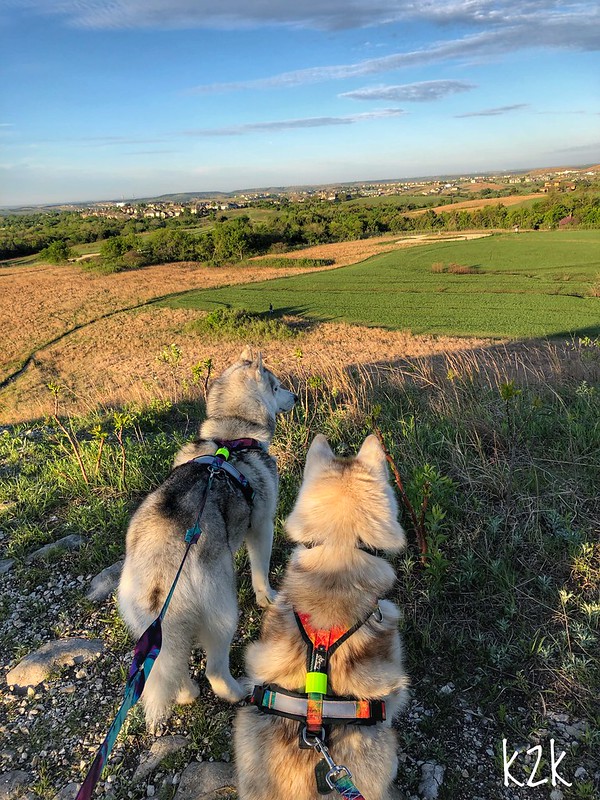 Hi everybody!  It's me, Ragnar!  As you know, the other day Maggie suggested that I tell the story of Alice In Wonderland.  Or as she put it, "Aventures d'Alice Au Pays Des Merveilles."  I thought it was a challenge worth accepting, and had a go at it.

Then I realized our copy of the book is in French.  I'm pretty sure I don't speak much French.  I was hoping there were a lot of pictures.

The book is definitely about a girl named Alice.  She goes on some kind of adventure and ...

... runs across some very different-looking characters.  That bun, for instance, looked like he plays trumpet in a jazz band or something.  Very odd.  I continued leafing through the book:

Sorry.  That cat was pretty freaky, I must say. No offense to any kit-cats out there.  He had this eerie grin on his face ... and his eyes follow you everywhere!

The whole "audible book" thing sounded like a great idea.  I listened to what I was pretty sure was like the Cliffs Notes version of Alice then reported back to Mags.

I think it's close enough.  And they all lived happily ever after.

Greetings to all!  It's me, Mags.  Wasn't that a sweet photo Ragnar shared yesterday?!?  When we're ready, we do very nice poses all on our own, without Mom asking.  And then sometimes when she does ask, we just aren't feeling it, so ...

Yeah. We weren't really in the mood.

Hi everybody!  It's me, Ragnar!  Yesterday morning, after our walk TO SEE THE HORSES, Maggie and I  messed around   helped Mom in the backyard for a bit.  On our way back in, we stopped and did this:

It made Mom feel very serene. We thought it might make you feel the same way.  Have a great Sunday!

Greetings to all!  It's me, Mags!  Ragnar and I took our mom and dad on a nice, long walk this morning!  We did a loop around the Kansas State University football stadium and the Vet School, then headed back toward home.  We had already hit the 6 mile mark when we smelled something incredible!  Ragnar was the first to smell it - then I did.  Finally, Mom and Dad saw what had us all pumped up -- there were HORSES in CiCo Park!!!

You know we love cows -- but wow, horses are even better!  I knew Mom and Dad were getting tired, so I didn't think we'd be able to go over to the park to see them.  Ragnar REALLY wanted to, though, and ... well ... let's just say Dad has a really hard time saying "no" to either one of us!

We crossed over the big street and headed into the park, then got a good look at our new friends!

Since we're calm around horses, Mom and Dad let us get closer to where all the action was.  Ragnar was thrilled!
We were curious to see what all was going on, so we walked down to the fairgrounds/arena area.

We watched by the fence for a while.  There were people riding, people making their horses go in circles, they were doing all kinds of cool stuff!  We especially liked this guy:

Sure, it tacked on about another 3/4 of a mile or so to an already long walk, but it was HORSES!  What a great day!

PS:  For the record, if we were the excitable sort or barked or did other things that would excite the horses, Mom and Dad wouldn't have let us go over there.  We don't want to cause issues for any of the participants at the event!

Hi everybody!  It's me, Ragnar.  On our walk yesterday, Mom and Dad hadn't really planned to walk up to the hills above Colbert Hills, but Mags and I really wanted to. When we got to the top, we did this:

Tell me that's not worth the climb!

Later in the walk, Mom asked Mags and me to pose. I was still feeling really happy so ...

Mom said she can definitely tell we're related. I wonder what she means by that?

Greetings to all!  It's me, Mags.  While Mom was quilting away the other day and Ragnar was working on his Pickle, I browsed around the Library a bit and found something interesting.

It's Alice In Wonderland. Only en français, as they say.  You know ... Ragnar did such a great job explaining Little Red Riding Hood, I think he should tackle Alice next.

What do you think? 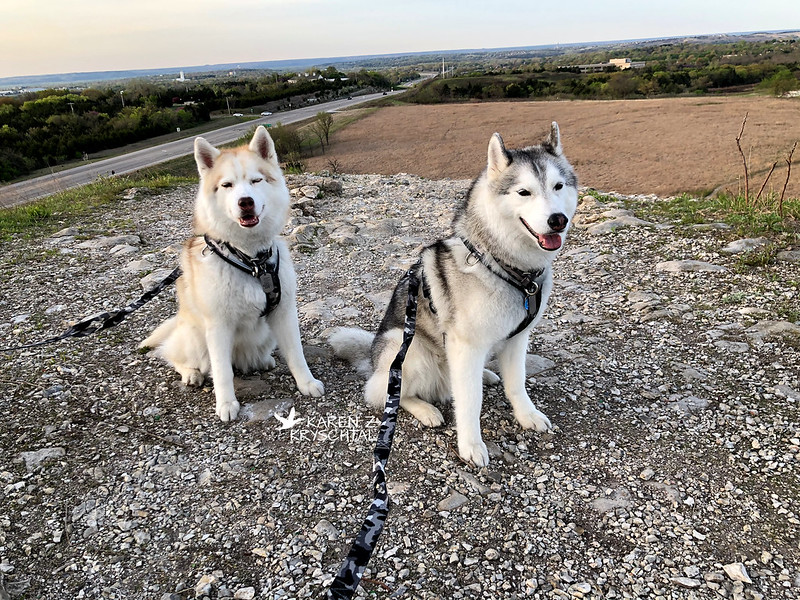