Greetings to all!  It's me, Maggie.  As the title reads, we've been broadening our horizons a bit here at Ao4 Headquarters since Ragnar joined the family.  Oh, I don't just mean while out on our walks - though we certainly are doing that!  We've been taking some awesome long walks!  But I digress.  Ragnar and I have also expanded our zoomie zone!

Usually, we zoom through the living room and dining room -- sometimes into the bedroom for some aircraft carrier landings.  But Ragnar and I have added the kitchen - boy, is that great fun, sliding all over the tile floor! - AND check this out:


Yeah! The bathroom! How cool is that?!?! I never would have thought to zoom in the bathroom!

Just when I thought I had Ragnar trapped ...


We also did this last night during TV time:


Mom seemed to like that better than bathroom zoomies. I have no idea why.

Yours sincerely,
Margaret Thatcher
Posted by The Army of Four at 2:01 PM 1 comment:

Hi everybody!  It's me, Ragnar!  We had amazingly beautiful skies on our walk yesterday, so Maggie and I thought we'd share some of the photos today for Serene Scenery Sunday.  Ready to take a look?

Here we are, heading up into the hills:


Then Mom said, "Ooooh!  Look behind us!"  This was the view that way:


Mom tried to get a photo of Maggie and me with the sunrise in the background, but it was early in on the walk and we didn't really feel like holding still quite yet.  She did manage to snag one of Mags somehow:


We kept climbing up, up, and up.  We took a detour down into a cul-de-sac Mom and Dad have been wanting to explore and as we headed out, we got another nice look at the sunrise:


We looped around in the hills, then started our descent:


One turn down at the bottom of that hill and we were at the Kansas Ocean!

What a great, beautiful walk!  We hope the photos helped add some serenity to your day!

Greetings to all!  It's me, Maggie!  Wow, what a day yesterday!  I have to say, so far being 7 is AWESOME!  Thank you all SO MUCH for all the wonderful good wishes!

As Ragnar mentioned, we had a great walk in some cool temperatures, did zoomies, hung out on the deck as a family for a while -- and that was all before 8 o'clock!  Later in the day ...

Mom bought some special treats to help celebrate the day!!


They're so GOOD!  They're made by the Three Dog Bakery people - they sure do make tasty treats!  I'd never had this kind before and couldn't wait to give one a taste!


Mom didn't get a shot of Ragnar with his, but trust me, he loves them every bit as much as I do!

So ... really, since we had such a long walk in the morning, we just hung out being very good, innocent puppies for the rest of the day.


OK.  Perhaps there were some birthday shenanigans ...

Just a little harmless Siberian-style fun!  Have I mentioned Ragnar's leaping ability?!?  So graceful, so fast, so ... sneaky!!!  What a great day indeed!

Thanks again for all the good wishes!  You helped make my day special!

Yours sincerely,
Margaret Thatcher
Posted by The Army of Four at 11:07 AM 5 comments:

Hi everybody!  It's me, Ragnar!  Today is a very special day here at Ao4 Headquarters -- it's my big sister's birthday!!!  Everybody, help me wish Mags a happy birthday!


There's been all kinds of singing and special hugs & kisses and lots of happy stuff!  Oh.  And a treat or two -- that's how Mom got that picture up top!

And presents!!!  The best gift so far is cool weather!  We had a ton of rain, and then this morning it was breezy and cool!  We celebrated by taking a nice, long walk!


Mom and Dad surprised us by taking a turn down a road neither Mags nor I have been on!

Mom took us out front for a birthday photo shoot.


We got treats anyway - since it's Maggie's birthday!  Is this a great day or what?!?!

And here are a couple favorite pix of her, just because!  Here we are at the top of a hill in CiCo Park:

And here she is on one of our local trails:

More celebrations to come later on, according to Mom!  Please help us celebrate!  HAPPY BIRTHDAY, MAGGIE!!!!!!!

Greetings to all!  It's me, Maggie.  Sometimes on our walks, we get to the top of a hill and we just have to stop to enjoy the view!

Oh.  Did I mention our mom wanted a shot of us looking at her, in front of that vista?  Without treats. Ha.  Yeah.

Have a great day!

Yours sincerely,
Margaret Thatcher
Posted by The Army of Four at 1:18 PM 5 comments: 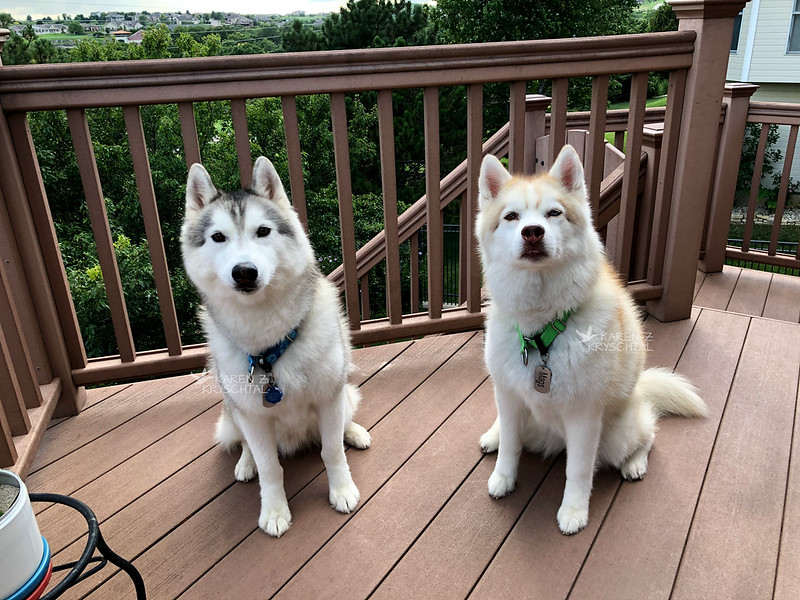 Ragnar and Mags
Posted by The Army of Four at 9:51 AM 3 comments:

The Best Part Of The Day

Greetings to all!  It's me, Maggie!  Ragnar and I have been having such great fun on our walks lately - we just have to invite you along on another one!

This morning, we did a 4.5 mile route we've done before, only backwards.  Oh, I don't mean we walked backwards, I mean we did the route the opposite way we ... yeah.  OK.  You know.  Anyway, from home, we headed up some hills, then hit the KSO:


It was really humid, but cooler due to some rain -- and we had fog!


Mom is pretty much convinced that going this way is all up hill.  The whole time.


It's confusing going the other way.  It's like a whole different route!

Anyway, those Maggie gates are on quite the hill, so we plowed on through!


It did level out a bit after that climb!


We love our walks.

He has a valid point there.  We do love our dinner time!  But walking time is AWESOME!

Yours sincerely,
Margaret Thatcher
Posted by The Army of Four at 3:00 PM 4 comments:

Hi everybody!  It's me, Ragnar.  Now that I've been here about a month and a half, Maggie and I have been trying this thing after dinner called "settling down".  It's really strange, but kind of nice at the same time.

It's funny - we aren't walking or playing or anything and Mom says we're being very good.  Huh.  Who knew?

This "settling down" thing might be OK!  ... for a little while. 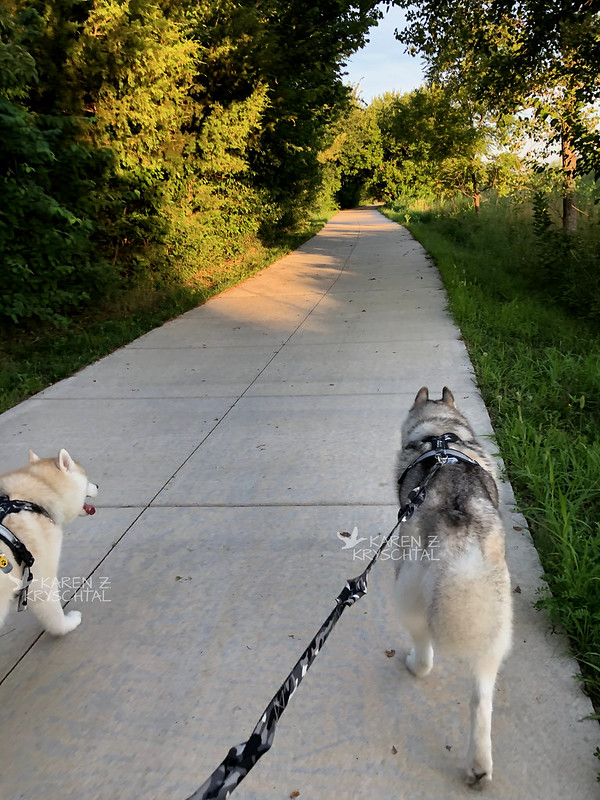 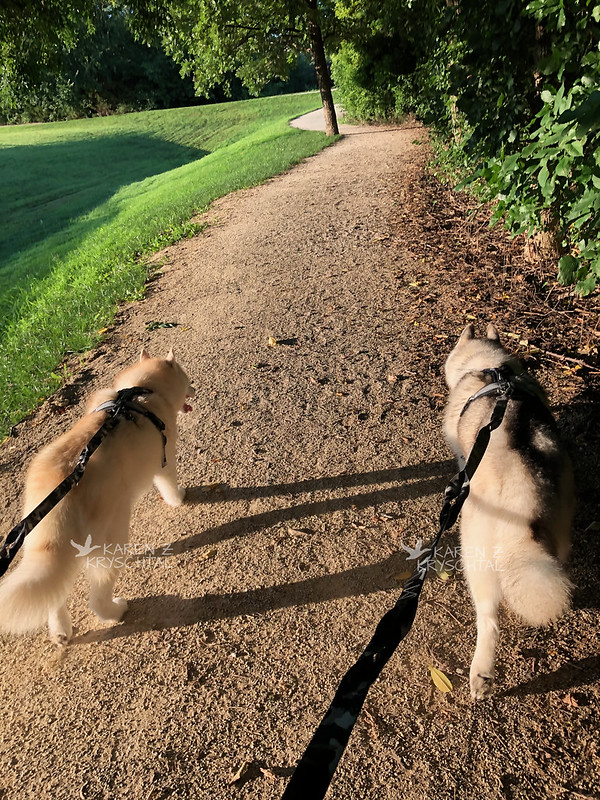 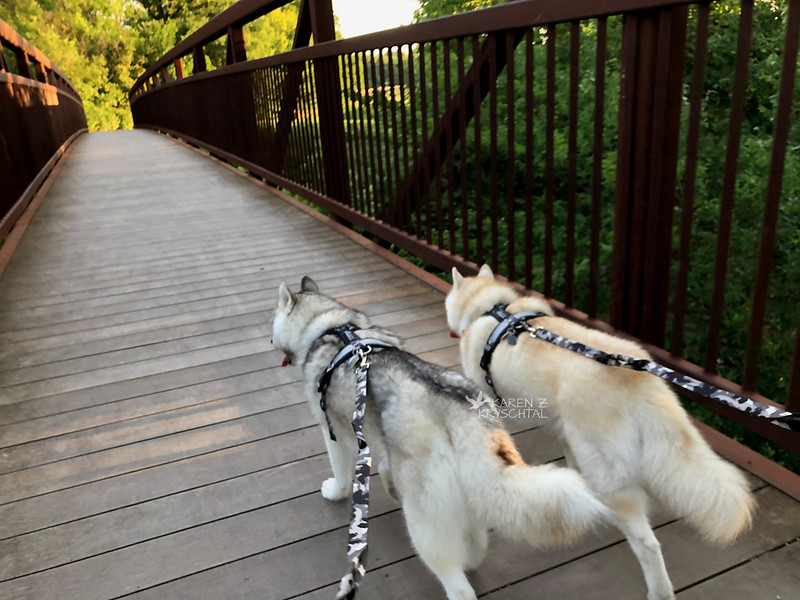 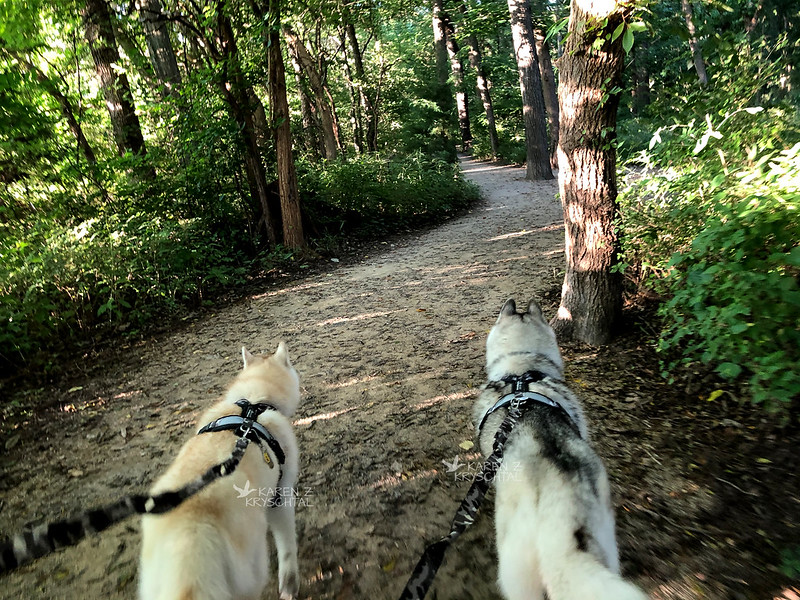 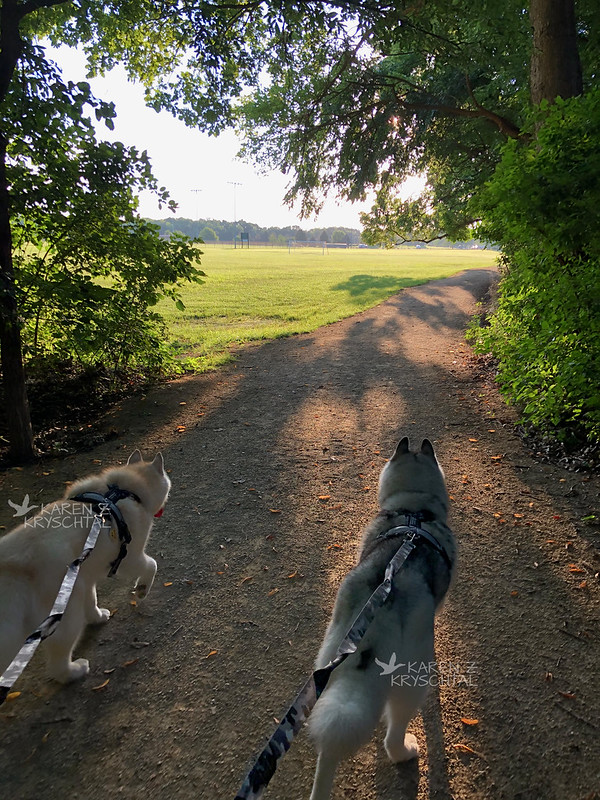 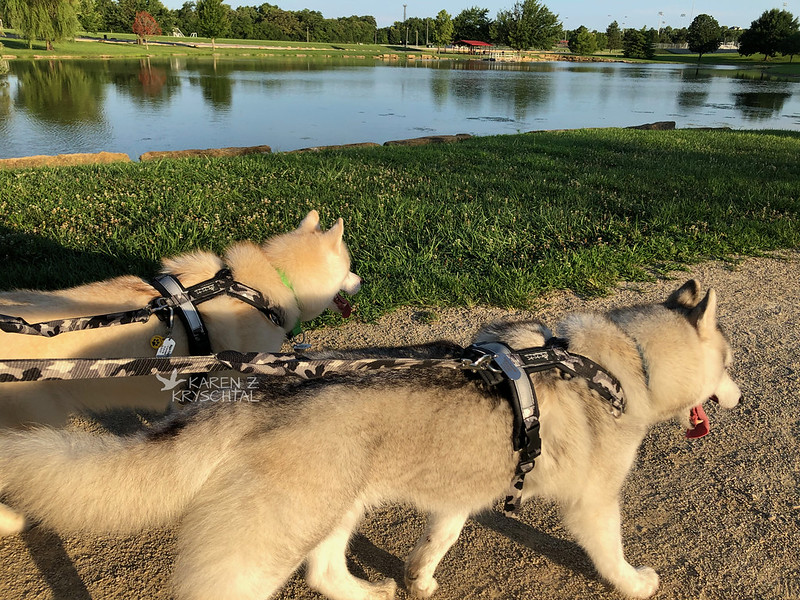 Yours sincerely,
Margaret Thatcher
Posted by The Army of Four at 11:39 AM 5 comments:

Hi everybody!  It's me, Ragnar!  Maggie has been teaching me the importance of doing cute poses.  You know, like if you do something you really shouldn't like ... I dunno ... jump off a retaining wall or something ... you need to do a cute pose to erase that out of Mom's computer-like brain.

Mags showed you how she's been mentoring me and that I've mastered the "under the chairs" poses. I've even managed to expand on that with a couple of my own:

(Have I mentioned Maggie taught me how to open the door to the bathroom? She's brilliant!  And wow, do I like splashing in water!  And the smell of Olay body wash.  Have I mentioned our shower doesn't have a door on it?  Does anyone know what "privacy" means?  Anyway ...)

I've also discovered not only do our windows have built-in chin rests, but we look really cute when we use them:


Who cares if there are smudgies all over the window, right?!?  It's nose art!

And of course, tops in my personal arsenal, as I showed you the other day ...

Maggie said it's good just to toss a cute pose into the day, even if you haven't done anything on the "questionable" list.  She's the best big sister a guy could ask for!

I hope you're all enjoying the weekend!

Greetings to all!  It's me, Mags.  Today, I thought I'd do a Photo Finish Friday, using some miscellaneous pictures Mom has taken since Ragnar joined our family.  I'll try to cut the chit-chat down to a minimum.  Ready to take a look?

Here we are on the first day Ragnar arrived at Ao4 Headquarters:


I know. We look like we've always known each other, don't we?

Here we are, the next day, on our first long walk together:


It's a common misconception.  When the heat breaks, we'll take Ragnar to the flatter part of the state!

Here we are on that same walk -- his first time down Hudson Trail!


And a day or two later, with his first time at the Kansas Ocean: 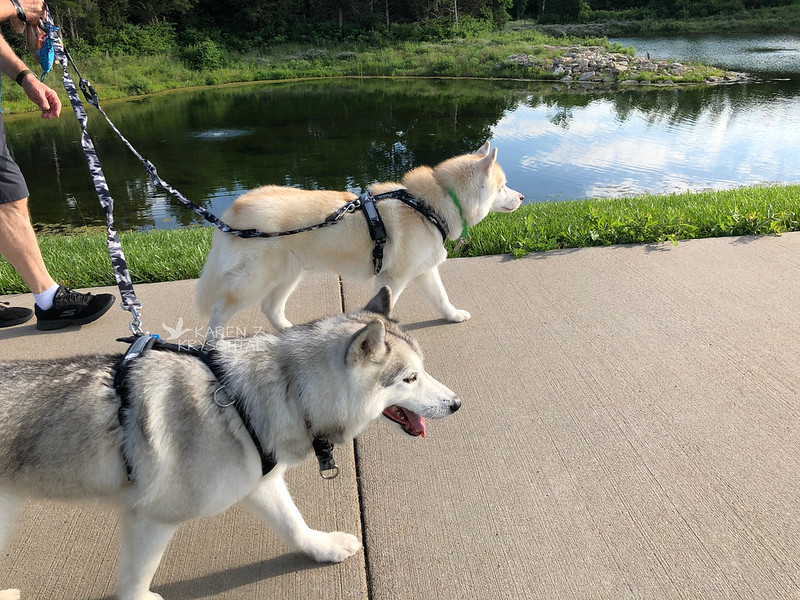 If you look closely at the little peninsula, you can see we're being watched by a Great Blue Heron.

We even stopped to pose that day:


I normally wouldn't do that without treats, but I was just so happy I couldn't help it.  Besides, I was tired.

And lastly, here's a scenic shot, as we stopped beside a field full of Black-Eyed Susans:

Anyway, we still have some catching up to do, photo-wise (Mom's been crazier than normal taking pictures!), but at least that's a start!

Happy Friday -- have a great weekend!

Yours sincerely,
Margaret Thatcher
Posted by The Army of Four at 2:19 PM 4 comments: