Greetings to all!  It's me - Maggie!  Some of you have noticed that whether it's a box or my really cool chair fort, I seem to like tight spaces.  It's true.  It's part of being a part-time snuggler.

Anyway ... yesterday, instead of putting up 87 million more light fixtures, Mom and Dad took their work party outside to do yard stuff.  For some reason, they don't require our help out there, so Cam and I stayed in the house and  napped  stood Guard Duty.  When they were almost done, Mom invited us girls out onto the deck so we could admire their hard work.

When we got out there, we did a lot of this:


It was mighty fun.  Then Cam said we really should look out and see what all Mom and Dad had accomplished.


Since they didn't need our help, Cam and I thought we should just sit on the deck together and relax.  She looked comfy in the corner of the landing, so I ...


Oh, sure.  We have two huge decks and I could have sat down somewhere else.  But why would I want to do that?!?

How about all of you?  Don't you like to be where the action is, too?

Yours sincerely,
Margaret Thatcher
Posted by The Army of Four at 12:32 PM 13 comments:

Greetings to all!  It's me, Maggie!  Since Cam and I are of the Working Breed persuasion, it should come to no surprise to any of you to hear that the two of us worked all weekend!  It was a huge task, one we'd never tackled before, and it was a smashing success!

It began with some trips to the store, Dad lugging a big ladder into the house, and gathering up some tools.  Oh.  And a long walk to "get the girls tired" -- whatever that means.  Anyway, let's get working!

What we did was change out 87 million ceiling light fixtures!  Or twenty four.  What's in a number?

Dad did the ladder part:


Wanting to put safety first, I offered my services at holding the ladder.


Mom said she would do it.


Sorry the photos are a bit dark.  Apparently you shouldn't have the lights on when you're swapping out fixtures.

Dad kept moving the ladder all over the kitchen.


For the record, Mom washed our bowls and gave us fresh water after we moved from the location.

We also went downstairs and swapped out all the fixtures in the inner part of Mom's Studio, in the Gallery, and in the Library!

Mom did this part:


Dad did this part:


And I did this part:

Oh.  And Cammie was on Guard Duty upstairs.  Oddly enough, she looked very well-rested when we got back up there.

Meanwhile, back in DIY Central ...


Yeah, OK, that would have been funnier with a regular incandescent bulb.  You get the picture, though.

I made an interesting discovery while we were working downstairs!


I had no idea.  Mom's been holding out on me.  Apparently, we have an Oreck canister vacuum that stays down there.  After we were done changing light fixtures downstairs, Mom used it to police up after us ... then I got to be vacuumed a bit.  I'm sure if Cammie had realized what she was missing out on, she would have joined us!  ...or not.

Anyway, having completed our tasks in the downstairs and on the main level, Dad headed up to the top floor and replaced a few fixtures up there!  When he was done, he brought the ladder back down to the living room.  He and Mom discussed what we were going to tackle next.

Mom and Dad decided that was enough for the weekend.  I must admit, I was a tiny bit tired from all the work - as was Cam.  Oh.  Right.  Mom and Dad might have been, too.

Anyway - what a productive weekend!  And it feels great making a bunch of improvements to Ao4 Headquarters!  Job well done, everyone!

I hope you got the most out of your weekend, too!

Yours sincerely,
Margaret Thatcher
Posted by The Army of Four at 10:41 AM 13 comments:

Hello, everyone!  It's me, Cammie, here with Serene Scenery Sunday.  This week, it's all about the birds.  Often, we share with you the photos Mom takes while we're out at Tuttle Creek State Park, but today we thought we'd show you some of our neighborhood birds!

Sometimes, we do a little birding while we're out on our walks.  We were near the Kansas Ocean the other morning, when Mom got all excited.  Dad lent her his camera and she ran down a bit closer to the water to snap this shot:


Ring-Necked Ducks! Right on the Kansas Ocean! Mom had never seen any there before, so she was all kinds of excited!  There were three in total.  One was diving for algae when Mom took that shot.

We also saw this little Killdeer bopping along:


They are one of Mom's favorite birds, so we were very happy to see them while we were out walking!


We also do a lot of birding right out in front of our house! Maggie and I like to help; we people-watch while Mom shoots birds. With the camera. Shoots them with the camera. Here's Maggie:


And here is one of the birdies Mom saw:


I like to go out front to bird, too. Here I am, helping:


Our neighbors' tree has been loaded with Cedar Waxwings lately! They come in to eat all of the fruits.


We also do some birding off the back deck. This dove was posing for Mom yesterday:


Not wanting to be shown up by a bird, Maggie and I struck a pose, too!


I won't go into who did the better job posing, but Maggie and I got to split a treat after ours. You can draw your own conclusions!

Anyway, I hope our birdie pictures helped add a little serenity to your day! Have a wonderful Sunday!

Relaxing in the Evening


We had just gone on a nice, long after-dinner walk and I thought we had all agreed we were going to watch a little TV.  Only ...


How do all of you relax in the evenings?

Greetings to all!  It's me, Maggie, here with a series of photos to finish off the week.  Down here, in my really cool chair fort.

I'll save my sneak attack for another day.  Have a great weekend, everyone!

Yours sincerely,
Margaret Thatcher
Posted by The Army of Four at 1:21 PM 14 comments:

Greetings to all, it's me, Maggie!  Mom and I took a quick trip to the vet school yesterday.


No appointment or anything, Mom just needed to check my weight before she has my monthly preventatives refilled.


We Sibes usually reach full height by about the first year, but fill out until we're about two.  I won't be two until July, so Mom wanted to be sure she has me in the right weight bracket.


Might as well make a few people smile while I'm there - right?

Yours sincerely,
Margaret Thatcher
Posted by The Army of Four at 10:26 AM 13 comments: 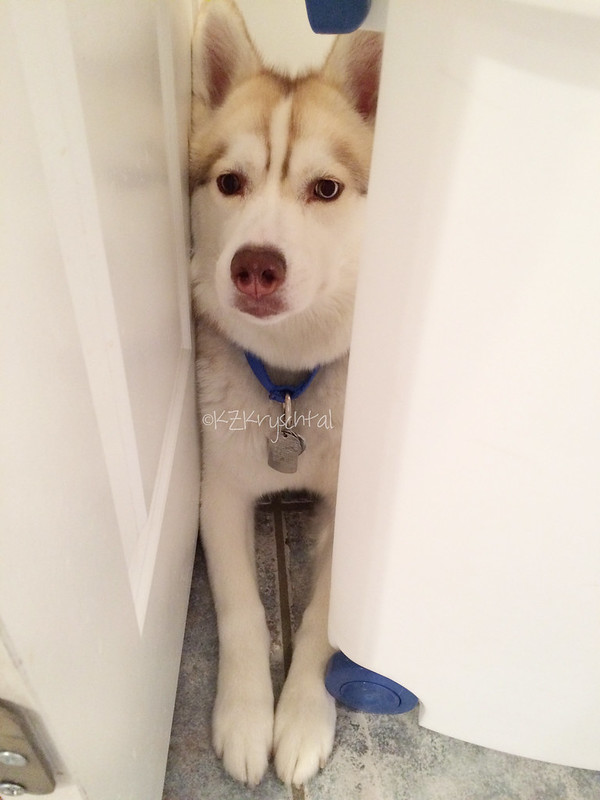 Yours sincerely,
Margaret Thatcher
Posted by The Army of Four at 9:46 AM 15 comments:

How Could This Walk Get Even Better?!!?

Hello, everyone!  It's me, Cammie.  The other evening after dinner, we took a lovely family walk.  We got to go down one of our favorite paths:


And stopped by the Kansas Ocean for a photo:


We were about to round the corner for home when I spotted it right there on a neighbor's car!

Just when Mags and I were wondering how this walk could get any better!  Totally awesome!

Hello, everyone!  It's me, Cammie!  Yesterday was a picture-perfect day, by biped standards - mid-70s, a slight breeze, and incredibly blue skies!  Sure, Mags and I would prefer something about 50-60 degrees cooler, but this made Mom and Dad so happy that once Dad got home from golf, we all went on a long family walk!  It was mighty wonderful.  I thought I'd share a bunch of photos with you - are you ready to go?

We walked out to the big road and kept walking uphill.  Near an intersection, Maggie found something of note:


Mom convinced Maggie it wouldn't be a good idea to try to grab one.  She was going to do it anyway, but there was a Lab across the street walking his people and she got distracted.

We headed up this network of sidewalks that goes up and up and up into the hills.


When we got to the top, Mom wanted us to pose.  This was the best we did for her:


Can you see the Flint Hills in the background?  We had a lovely view up there!

We hit a little bit of shade after a while and stopped for a quick break.


I thought I should clarify that!

Mom kept trying to get a good shot of us, but we were off-roading and the smells were way too intoxicating!


We reached the end of that path and doubled back.  We stopped for a quick photo:


The sky was so beautiful!  Mom kept trying to get a good shot of us and the sky - this is the best she could do:


It wasn't what she planned, but she likes that a lot!

We walked and walked some more, then stopped on some stone benches for a water break.  Here were are with Dad:


In case you're wondering if we were having a great time, check out the expression on Maggie's face in this next shot:


While Maggie got another couple sips of water, Mom took this shot of me and Dad:


There is nothing wrong with being a Daddy's Girl!!!!

Anyway ... we took the long way home from there, and looped past the Kansas Ocean!  We only walk past there on weekends now because they've been doing a lot of construction in that area.


It was a great walk! I'm glad Dad brought our canteen for us so we could stay hydrated! Do your bipeds do that for you? It's very important, now that the weather is warming up!

Thanks for coming with us! I hope you had a good time!