Hello, everyone.  It's me, Countess Cam-ula.  Mags the Impaler and I would like to wish all of you a SAFE and happy HOWL-oween.


Remember - no chocolate for pups and kit-cats, and please -- no bolting out of open doors! Stay inside, stay safe!

Countess Cam-ula
Posted by The Army of Four at 8:48 AM 19 comments:

Good eeeeevening, everyone!  It is I, Mags the Impaler, here with Countess Cam-ula!  As we mentioned in our post from the Black Swamp yesterday, we headed out on a day trip with Mom and Dad yesterday to do some birding.  One part in particular was reeeeeally scary, and I thought I'd share it with you.  Let's start from the beginning.


I don't know what it is with Cam and travel Othello!

Anyway, we were heading back to Quivira National Wildlife Refuge!  It takes a couple hours or so to get down there, so in addition to backseat navigating, I found other ways to amuse myself.


Cam nixed that idea, so I did what came naturally ...


We got really close to one of those submarines this time:


I still have no idea what they're doing out there!

We saw this place on the way down, in the small town of Ellinwood:


It's nice that they have a place for wolves to stay, isn't it?

Anyway, we drove around Quivira National Wildlife Refuge for quite a while, then decided to see what was north of the refuge. And ... HERE'S WHERE IT GETS SCARY!!!! Brace yourselves, readers!!!


Seriously. For those of you who know my mom's sense of direction, that is downright FRIGHTENING!!!!

Here's one of the roads we went down:


Scary, isn't it?  But, hey, Mom saw cool stuff to photograph (we'll share some of Mom's pix and a link to them later on this week!) and Dad knew what he was doing, so it was all good.

Speaking of good -- back to me and Countess Cam-ula!  We took a nice break in one of the small towns on our way home - stretched our legs, had some beverages, had a snack.  Oh.  And Mom and Dad had sandwiches.  Mom opened the back hatch of our Husky Recreational Vehicle (HR-V) to get them after Cam and I were seat-belted back in.


Countess Cam-ula really needs to stop smiling so much, doesn't she?  Sheesh!  Anyway, back to my mind-meld ...


So, yeah. That was TOTALLY effective; Cam and I each snagged a bite of Mom's sandwich. It was awesome! So was the whole trip! Tune back in later in the week for Mom's photos!

Yours sincerely,
Mags the Impaler
Posted by The Army of Four at 1:45 PM 15 comments:

Hello, everyone.  It's me, Cammie.  I mean Countess Cam-ula. I'm here at the  Kansas Oc  errr... Black Swamp with Mags the Impaler.


We were out all day helping Mom find birdies, so we'll have more to say tomorrow.  I hope you had a spooky day.

Countess Cam-ula!
Posted by The Army of Four at 4:32 PM 9 comments:

That's What They're For!

Greetings to all!  It's me, M---- I mean Good eeeeevening!  It's me, Mags the Impaler!  As, um .... Countess Cam-ula told you yesterday, we had some great indoor playtime the other day.  Before we did this ...


... we played with our WestPaw Design toys. Cam had the Tizzi:


I meant "Countess Cam-ula". And I had the Toppl:


What can I say? They don't call me "Mags the Impaler" for nothing. My teeth are one of my strengths!

Yours sincerely,
Mags The Impaler
Posted by The Army of Four at 11:12 AM 14 comments:

Hello, everyone!  It's me, Cammie!  The other day, Maggie and I got to play with some of our "under supervision only" toys for a while, then we decided to play with our favorite "all the time" toys -- each other!  It went something like this:


We did super fast zoomies and Mom couldn't get clear shots, then ...


I have some crazy moves when I want to!  Here I am, going in for the neck grabbie:


We had Mom put a little video together, too.

As you can see, we played nice and gentle, then I went over to Mom to be on base. Maggie's not supposed to be able to do neck grabbies if I'm on base. 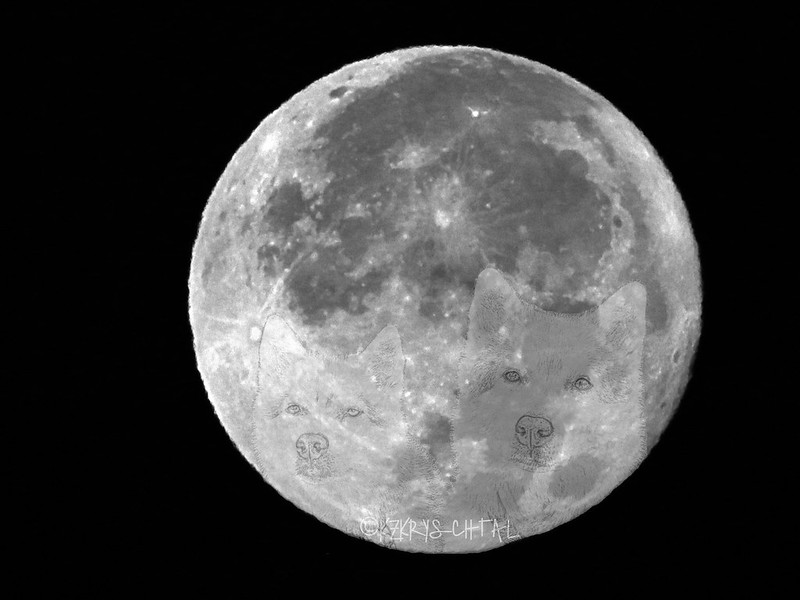 Mags and Cammie,
The Sibes in the Moon
Posted by The Army of Four at 10:00 AM 18 comments:

Hello, everyone!  It's me, Cammie!  Yesterday, Maggie and I received our "Think Pink" button from Angel Greta, via our sweet friends over at The Idaho Pug Ranch.


You can read all about how this came to be at that "Think Pink" link, but the bottom line is the Pugs' mom is celebrating FIVE years as a breast cancer survivor!

Maggie wanted to get in on the  treats  photo shoot, too.  We both did our Serious Look; it seemed fitting.


Mom got me to pose one more time with the button on my bandana:


Wasn't it nice of our Pug friends to send this to us?  I had to take my bandana off after the photo shoot  so Maggie wouldn't eat it and the button  lest anything happen to it.  Mom let me pin it to my harness for this morning's walk, though!


Of course, if Mom had remembered to let me wear my PINK harness instead of my purple one, it would have been even better ... but perhaps tomorrow!


It was a great walk and I loved wearing my special button!  When we arrived back at Ao4 Headquarters ...

... we broke into a round of Crazed River Otter Games.  We can't be serious ALL the time! Mom said I need to be careful when I wear the button on my harness, too, as "something" could happen to it.  No worries, Mom!  I'm on it!

Many thanks to Angel Greta and all of the Idaho Pug Ranch pups (Hazel, Bailey, and Mabel) for sending us this special awareness button!  And most of all, we are SO HAPPY for your mom!!!

Hello, everyone.  It's me, Cammie.  Try as I may, there are certain things I just don't "get".  I told you about the whole "pumpkin spice" thing not long ago.  Today, it's candy corn.

Especially the giant candy corns all over town.  I keep trying ... but it's just not my thing!

Greetings to all!  It's me, Maggie!  How about a stroll through our gardens to get our serenity fix this week?  Who's ready to walk around Ao4 Headquarters to see what we can see?  We'll start out front.

The Mums are still in full bloom:


I like the white ones. We also have sort of rust ones and pink ones. Here's a collage of all the colors: 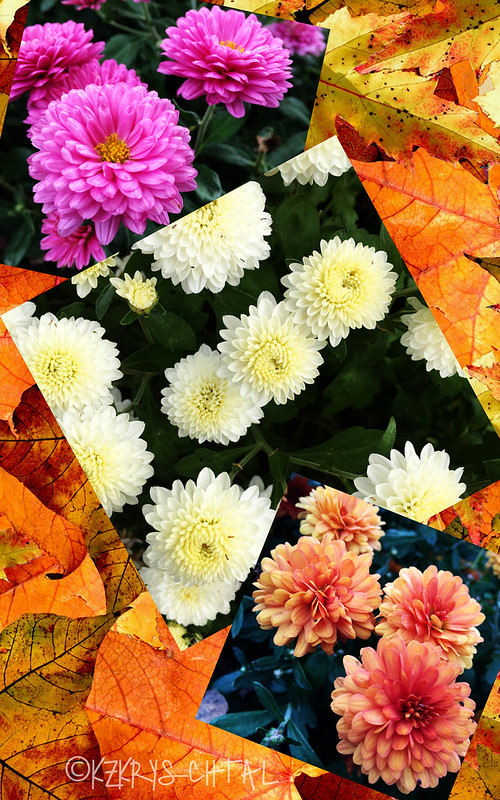 The Purple Love Grasses we showed you last week are super purple now - especially at dusk. Check them out:


Mom loves them! And they don't get much taller than a foot or so!

We have one last Gerbera Daisy over here in the mailbox planter:


I was going to pick it to send to a friend of ours, but she lives in Florida and Mom didn't think it would look too good by the time it got to her. I hope that old "it's the thought that counts" thing is true!

Here's a close up:


The bees had a lot to say!


Speaking of which, check out Mr. Bumble Bee on the Blanket Flower: 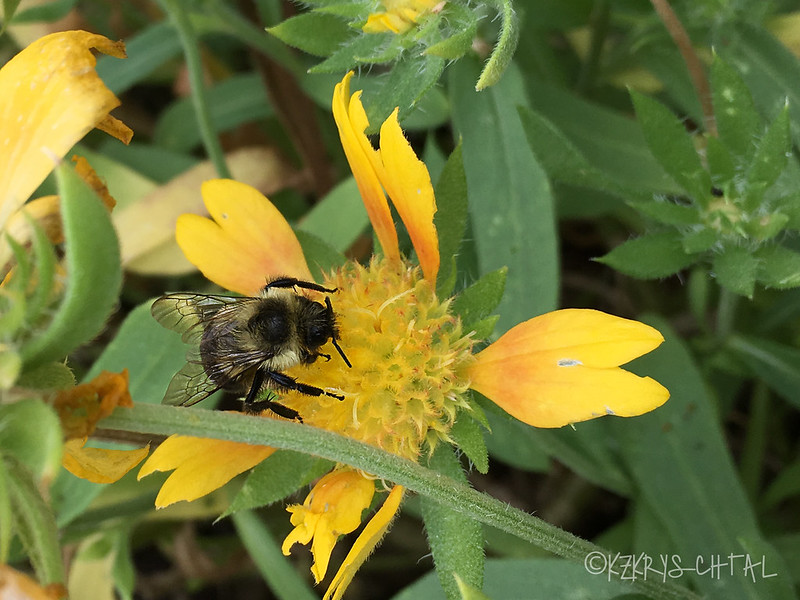 I know there is a lot of talk about the decline in the number of bees around, but you sure couldn't tell that based on our garden activity! They're all OVER the place!

Some of our Coneflowers are still blooming:


Some people don't think of ornamental grasses as "blooming", but we love their "flowers"!


We love the movement they give to the garden all year long!

That's a wrap for this week! Thanks for walking around our gardens with me.  We hope you feel nice and serene now!

Yours sincerely,
Margaret Thatcher
Posted by The Army of Four at 11:23 AM 14 comments:

Greetings to all!  It's me, Maggie.  I haven't shown you this for a while, but I still like to practice my aircraft carrier landings - it's just that (1) I'm really fast and (2) Mom isn't usually on the far side of the bedroom with her iPhone.  Everything fell into place the other day, so ...


She was even worse that time!  Not only do I need to keep practicing my landings, but my mom sure needs to practice getting a shot of me!  Let's go again!


Getting better!  Maybe if we go again?


What great fun! It lets me practice my landing and "touch and go" skills, lets Mom practice shooting a moving target, AND lets her practice making the bed again! All kinds of good stuff!!!

Yours sincerely,
Margaret Thatcher
Posted by The Army of Four at 10:21 AM 12 comments:

Hello, everyone!  It's me, Cammie.  We are teaming up with our friends over at Dory's Backyard for Flower Friday again this week.  We thought we'd see what was blooming along our walk this morning - are you ready to go?

Mom let me choose the route today.  She thought we were going to go through the neighborhoods, but I chose this way instead:


I do!  We get to go through the shopping center parking lot (where we ALWAYS engage in Crazed River Otter Games -- it's a tradition!) then we get to go into the woods!


We kept seeing things that Mom didn't see today.  As we walked through these woods, I kept turning around, looking back.  Mom thought it was a bunny or a squirrel or a turkey or something, but I wouldn't show that much interest in something like that.  The last time I turned to look, she looked, too; there was a man standing in the brush, about 15 feet off the trail.  Just standing there, looking at us.  It was odd.  I stared at him, so he knew not to mess with us.  There's a chance I got an extra treat when we got home.  Especially because it happened again on another part of our walk.  Odd.

Moving on to the flowers ...

Here are some beautiful Kansas Sunflowers!!! 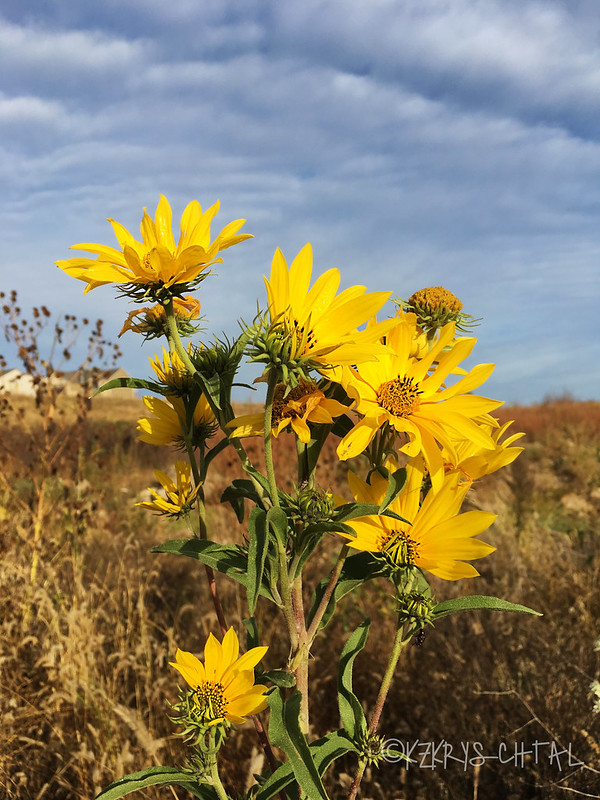 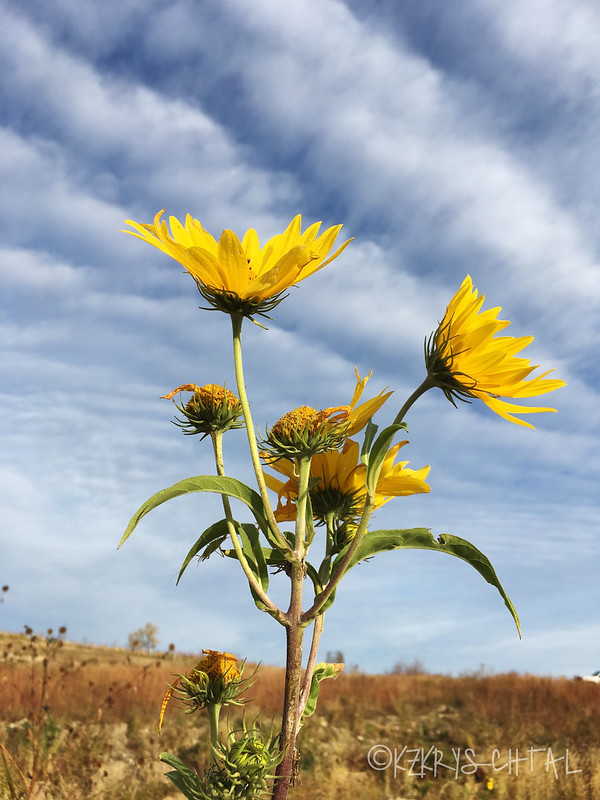 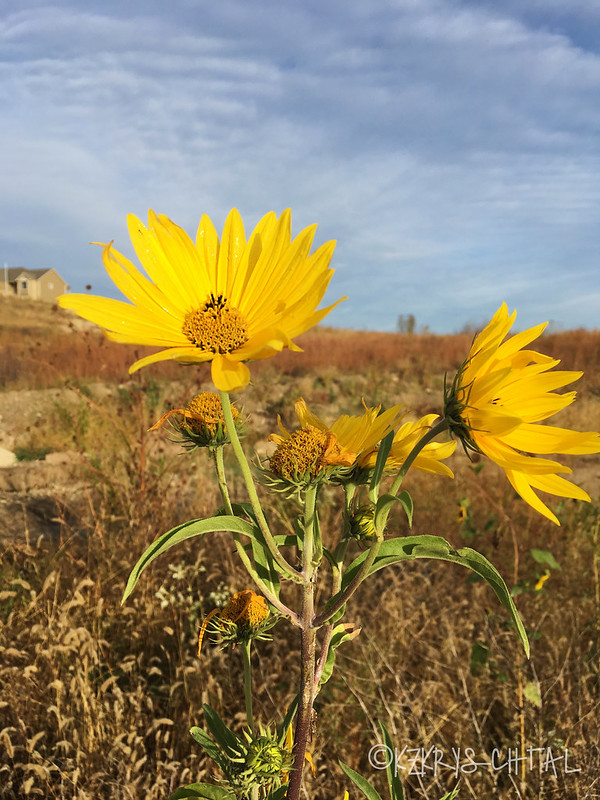 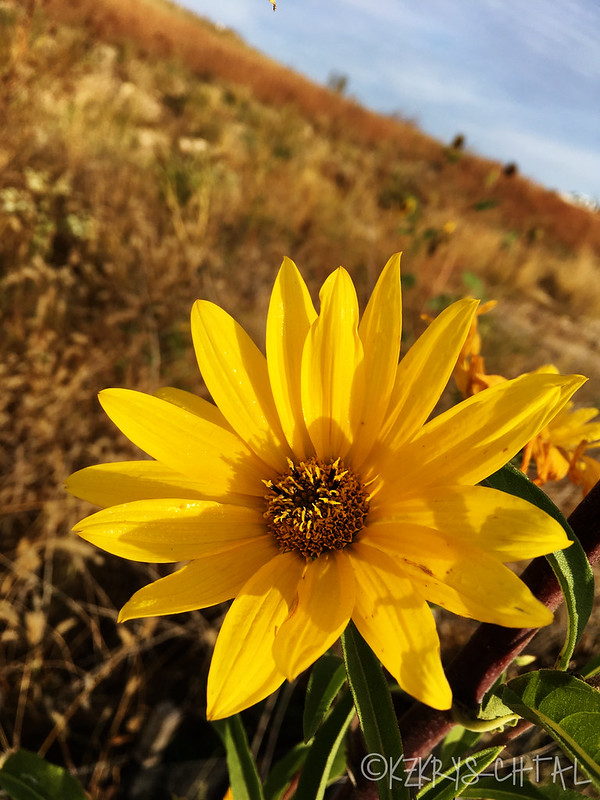 We keep thinking they're done for the year, but then we see more.  We love our sunflowers!

Mom thought we should pose at the Kansas Ocean.


We had other ideas.

When we headed up the water tower path, we saw these beautiful NonoMaggienono Berries all over the place:


For the record, Maggie was very good about not trying to eat any. This time.


That's a wrap for this week! We hope you enjoyed walking with us!