Hello, everyone!  It's me, Cammie!  So there I was, standing in the field enjoying the snow ...

What a fun outing that turned out to be!!!

Hello, everyone!  It's me, Cammie!  Because of ice underneath and on top of the snow, our walks have been cut a bit short lately.  Today, however, we checked for messages real fast by our driveway ...


... then we walked down to a nice soft-snow filled field!  We both thought a round of Crazed River Otter Games (CROG) was in order!


That round went to me.  We circled a bit, like River Otters do ...

... that round went to Maggie!

We decided we both won, then decided to head home.  What a fun, fun walk it was! 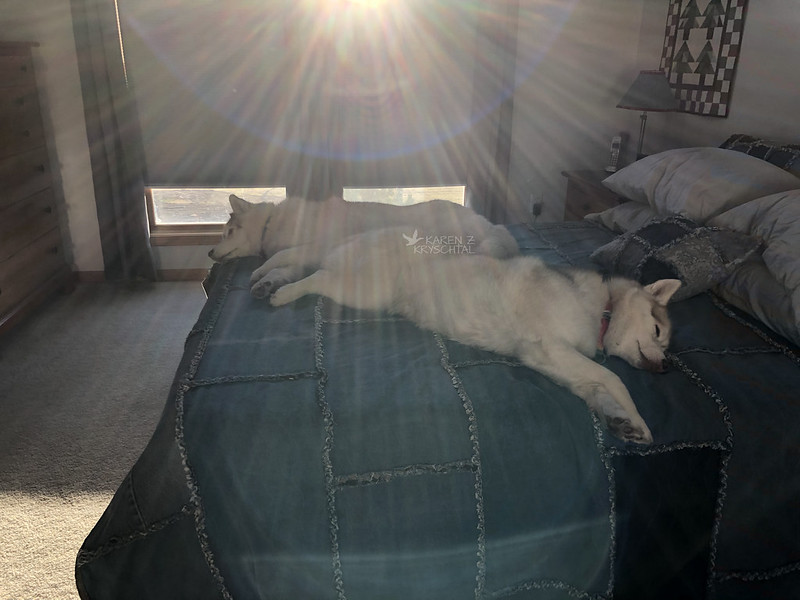 And So It Begins

Greetings to all!  It's me, Maggie!  The day before our most wonderful blizzard hit, when it was in the 60s, Mom and Dad put the outside Christmas decorations up.  It seemed like a good idea to me until ...

Fortunately, Mom wasn't ready to start ripping into all the other Christmas things.  Yet.  But I know it's coming!  Are you starting to get into the Christmas spirit?

PS:  If you see odd dots of color on us, it's some weird light Mom and Dad were testing out.
Posted by The Army of Four at 10:03 AM 9 comments:

Greetings to all!  It's me, Mags!  A most joyous Siber Monday to all of you!!!  Today is the day to embrace your inner Siberian!!!

Fortunately for us, as Cam said yesterday, we have snow to mark the day! It did more blowing than snowing, but even still, we have enough snow to make things nice and festive! How about some photos of us out enjoying the snow?!?

Cam's tummy fur still hasn't grown back in from her last Oncology visit (she has an ultrasound every 3 months), so she's not quite as into the snow celebration as I am.  But at least she wasn't overly cooperative for Mom's desired photo shoot!  How Siberian!!!

Mom also wanted me to pose out in our front yard.  I had other plans!

OK, this time it was just a frozen leaf, but it could have been a vole!

Happy Siber Monday to one and all!  We are celebrating with snow, not cooperating for photos, and a healthy imagination!  How about you!?!?

Yours sincerely,
Margaret Thatcher
Posted by The Army of Four at 10:31 AM 12 comments:

Hello, everyone!  It's me, Cammie!  Since yesterday I promised birdie pix from one of our recent trips down to Quivira NWR, I'll post those today.  What is REALLY serene right now, though, is that we are in the midst of a blizzard!  It's been blowing and snowing since about 0630 this morning and isn't expected to stop until late afternoon or so.  Isn't that wonderful?*

Let's get to our trip!  These photos were all taken on the 6th of November.


It was indeed raining, but it was expected to be clearer down there (the refuge is quite a way from Ao4 Headquarters!), then stop altogether.

On the way down, we saw fields full of murmuring birds.  If you'd like to see the vid Mom shot (through the rain, the windshield, and with the iPhone) please click here.  It's not great, but it's the best we could do at the time.

As you could see, the rain was starting to break up.  In fact, when we got down to Quivira ...


The first birdies we saw were American Avocets:


They usually leave in October, and when we went back last week, they were gone.  Safe travels!

Mom was very excited to see this small bird:


The Loggerhead Shrike was a "lifer" for her -- one she saw for the first time!  Can you see how his upper bill is shaped like a hawk's?  They are known as "butcher birds" and impale their prey on long thorns.  I guess I should move on, in keeping with the "serene" theme here ...

Also perched high up on a dead branch was this dove-sized falcon:


The blue wings, as opposed to rufous, are an indicator that it's a male.

While we're on birds of prey - we saw a handful of Bald Eagles!  A group of four immature eagles was putting on quite the show for us!  Take a look: 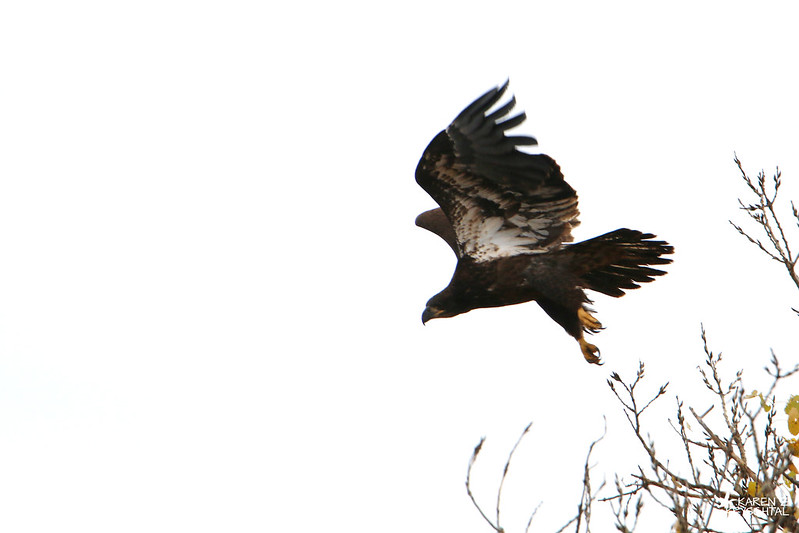 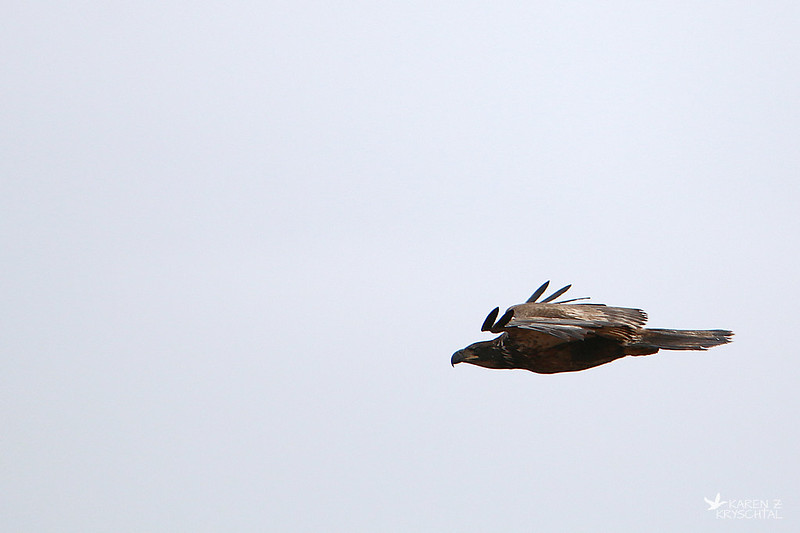 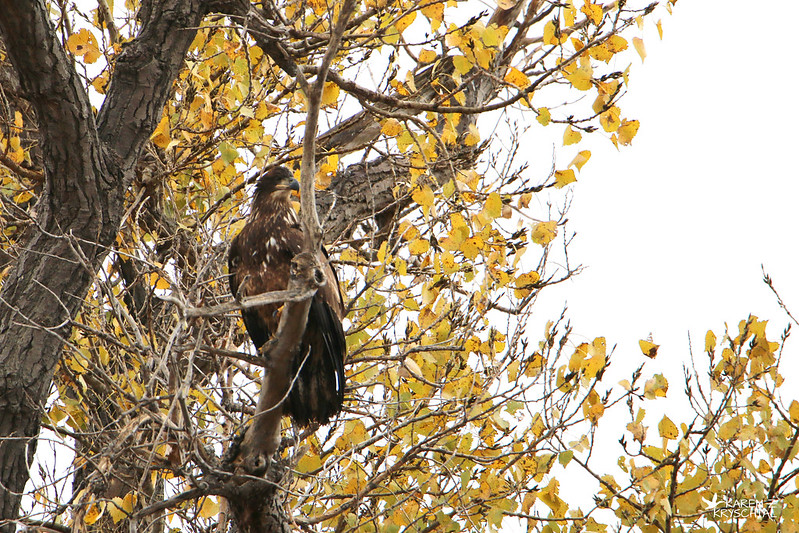 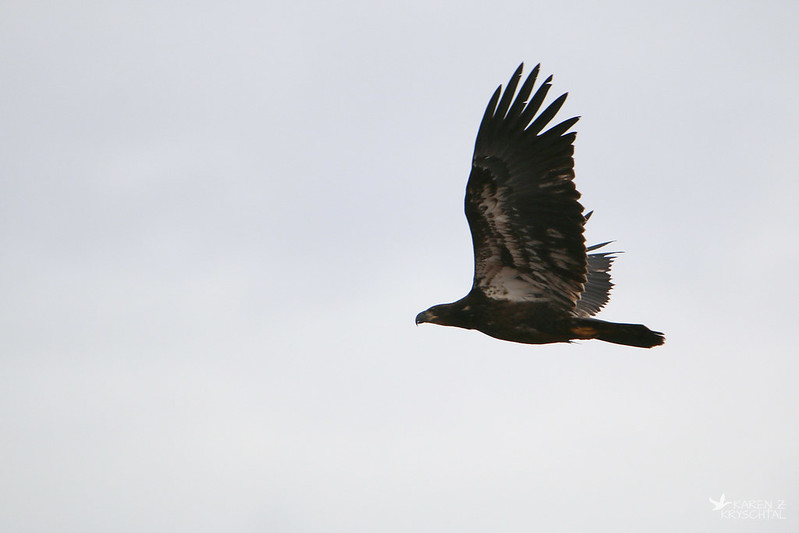 Aren't they magnificent?!?!  The eagles are following the food source:


Mom is "ahem"-ing at me.  Apparently discussing the food chain isn't suitable for Serene Scenery Sunday.

We watched this heron:


He swooped in quickly, then hid in the reeds.


... and her second favorite duck:


He doesn't get as many hearts or capital letters as the Shoveler.  Apparently.

We saw several other types of ducks, to include this one:


Despite the rain and clouds, it was a mighty wonderful trip!

*The views expressed by Siberian Huskies concerning blizzards do not necessarily represent those of their photographer/editor.  Ahem.
Posted by The Army of Four at 2:32 PM 6 comments:

Hello, everyone!  It's me, Cammie!  A few days ago, we made an all-family trip down to Quivira National Wildlife Refuge.  Mom is still processing her gazillion photos (plus the gazillion-and-one photos from the trip before that ...) BUT we do have some scenic shots to share with you from the iPhone in the interim.

On the way home, we stopped for a leg-stretch in the town of Ellinwood, as we like to do.  Mom and I did some exploring along the brick-paved streets:


It's a very friendly town - and I'm not just saying that because several people stopped their cars, rolled their windows down, and said that I'm "so beautiful".

It was such a beautiful day to do some exploring!  We'll share more pix of the trip with you soon!  For now, we hope you enjoyed Serene Scenery Saturday.*

*Someone around here who is in charge of editing our photos has day-of-the-week confusion again.  Sigh.  Good help is so hard to find!
Posted by The Army of Four at 10:19 AM 8 comments:

Greetings to all!  It's me, Maggie!  This round of Crazed River Otter Games is going down in ...


We hope you all are enjoying the day as much as we are!

Yours sincerely,
Margaret Thatcher
Posted by The Army of Four at 10:50 AM 8 comments: 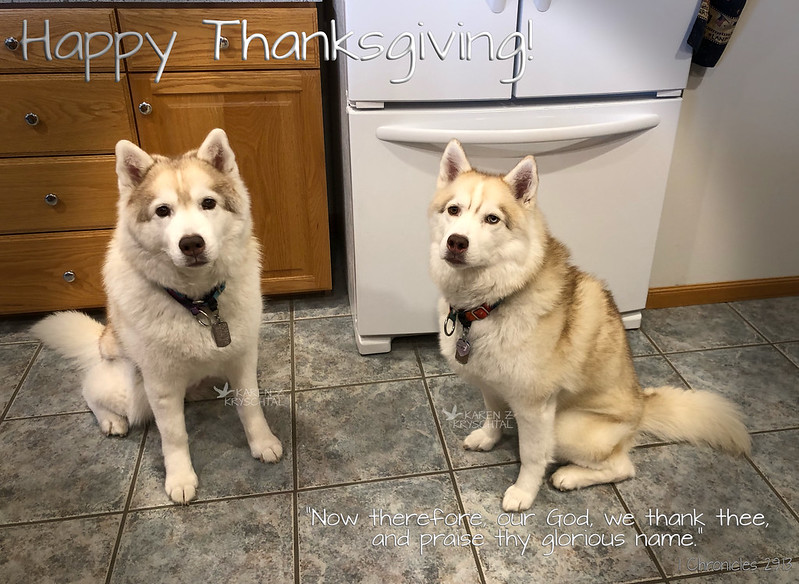 Happy Thanksgiving to all of you from all of us! 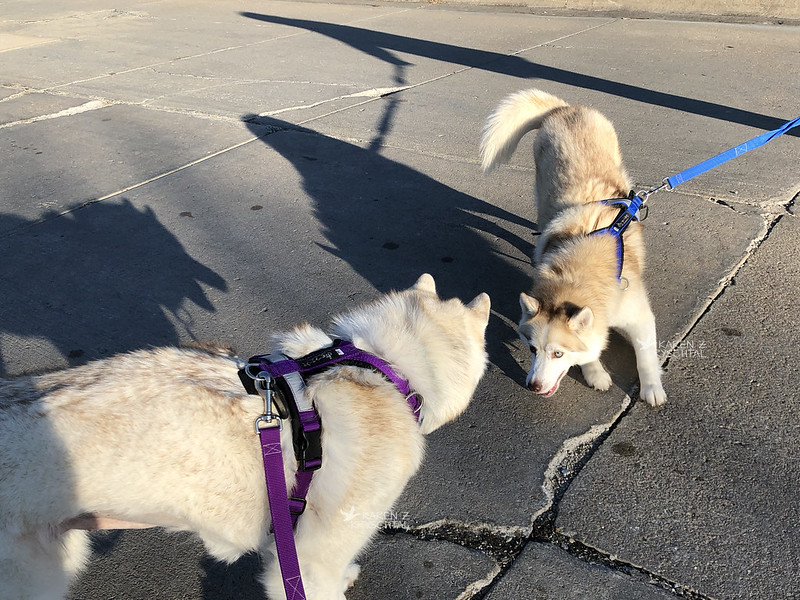 Greetings to all!  It's me, Maggie.  You know, somehow, helping Mom in the Studio all afternoon can be really tiring!  Not for me, mind you. But Cam settled in for a nice nap - and now what am I supposed to do?


If only I had something to play with or something. You know?

Yours sincerely,
Margaret Thatcher
Posted by The Army of Four at 10:31 AM 13 comments:

Greetings to all!  It's me, Mags.  Yesterday afternoon, Cam and I helped Mom in her Studio.  I mean we helped her a LOT!  We helped her so much, in fact, that after a while, she said we could take a break and go lay down!

Mom moved on to sewing the binding on a quilt. We know that's tedious, so once our second wind kicked in, we helped some more!

Yours sincerely,
Margaret Thatcher
Posted by The Army of Four at 10:19 AM 13 comments:

Hello, everyone!  It's me, Cammie.  I'm going to let this photo do the talking for Serene Scenery Sunday this week: 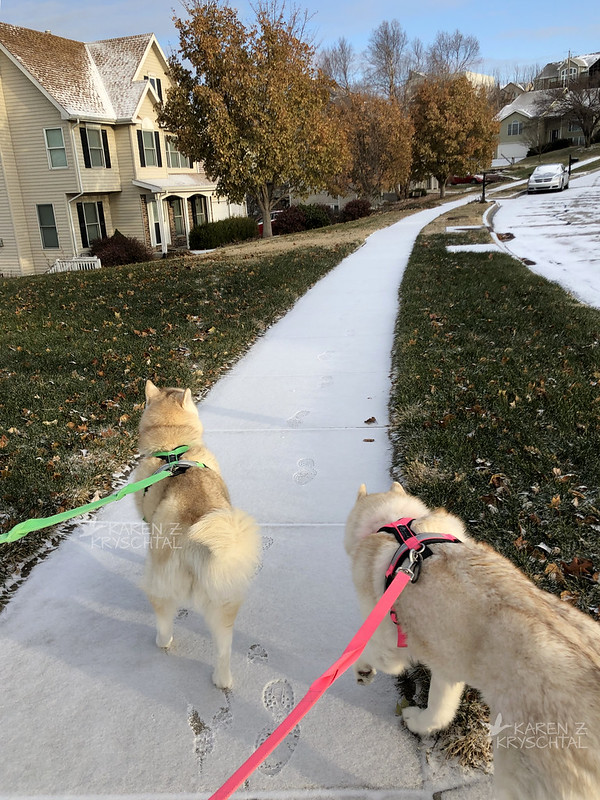 A fresh sprinkling of snow overnight and windchills in the teens. What a great day this is shaping up to be!

Greetings to all!  It's me, Maggie.  In the afternoons lately, if Mom has gotten enough other stuff done, Cam and I have been helping her in the Studio.  The other day, I thought Cam had things pretty much covered, so I went into the Library for a bit to soak up some knowledge.

Yours sincerely,
Margaret Thatcher
Posted by The Army of Four at 11:00 AM 10 comments:

Hello, everyone.  It's me, Cammie.  The other morning on our walk, Mom wanted Maggie and me to pose up near the top of the Water Tower Trail.  We sat, but ...

Hello, everyone!  It's me, Cammie.  This morning, we took another great all-family walk.  We were going to walk the short route, but then Dad said I could choose, and I went for a long route!  It was a lot warmer today - in the low 30s when we went - so Mom and Dad were OK.

Here's an action shot of me:


And here's one of Mags:


Maggie needed to try to get into something.


What a great walk we had!

You never know what you're going to see or hear in those woods!  It's always exciting!  (This time, it was just some little Juncos.)

Thanks for coming along with us! 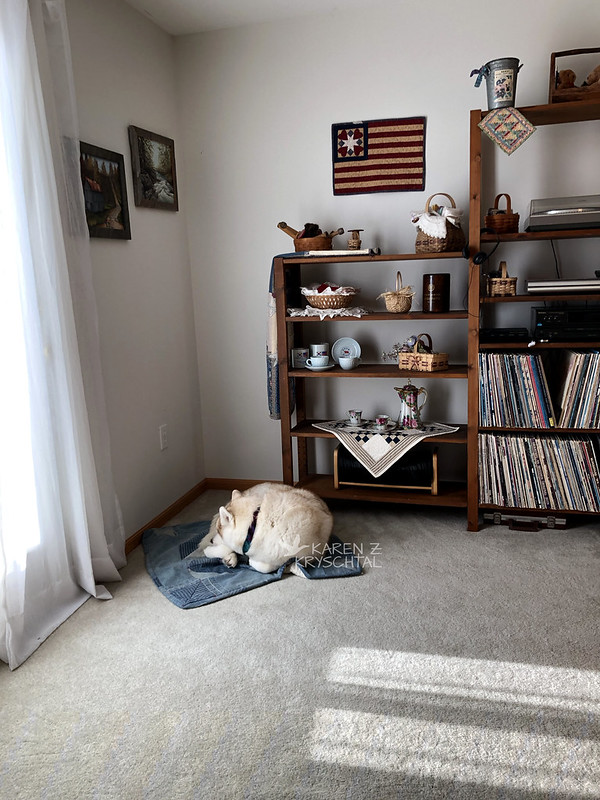 Hello, everyone!  It's me, Cammie.  The other morning, when according to our mom it was 78 degrees below zero, we took a lovely walk past the Kansas Ocean.  She forgot all about the "I can't feel my face" mantra she had been chanting when she saw that finally, after the severe drought and other challenges, there were visitors at the KSO!!!


She even shot video as we approached.

Needless to say, Mom was a bit more excited than we were. Still, it's nice to see the birdies returning!

Greetings to all!  It's me, Mags.  Yesterday, we were out on our morning walk, when something -- or someone! -- caught my eye!  She was up by one of the new houses, just hanging out.  I approached slowly.


She didn't have much to say.  She didn't seem bothered by me, so I went a little closer.


Still no answer.  I must say, it hurt my feelings a bit.  I mean - I can usually make friends with everyone.  I backed off and let Cam sort things out.

Maybe she's just cold.  The windchill was in the low teens when we went by (less than 10 below, for those of you in Celsius-land), so that could be it.  I'd hate to think she didn't want to be friends!

Yours sincerely,
Margaret Thatcher
Posted by The Army of Four at 10:01 AM 13 comments: