How To Get Our Attention

Hi everybody!  It's me, Ragnar.  Mags and I were in the midst of a very important meeting this afternoon when Mom started calling us.  We had already had lunch and gone outside, so we were going to just ignore her, but ...

I mean ... it's FROZEN COOKIES.  FROZEN.  COOKIES!!!  Needless to say, Mom got our attention!  Mags and I will get back to our planning meeting later!

Greetings to all!  It's me, Mags.  Yesterday, Ragnar and I worked overtime helping our mom in her Studio!  We did zoomies (including through the cubbies in her sewing table), explored her closet, put on a Snooter Jousting event, and Ragnar even helped empty the trash!  By close of business ...

Ragnar and I are always totally in synch!

Hi everybody!  It's me, Ragnar.  Mags and I thought you might like this scene from our walk the other morning!

We felt very serene. ... And we had less than 2 miles to go until we were home!

Posing By The Succulent Garden

Greetings to all!  It's me, Mags!  The other day, after Ragnar and I horsed around a bit in the back yard, Mom wanted us to pose by the Succulent Garden.  Fine.  If we have to.  Right? We sat very nicely:

I thought I saw our favorite neighbor for a minute there.  Anyway, yes, there was talk about looking at the camera and blah, blah, blah, so ...

I mean, when even Ragnar is bored with Mom's photo shoots, you KNOW it's time to just chuck it and go inside!

Happy weekend to all!

Hi everybody!  It's me, Ragnar!  Mom started snapping pictures during our water break again ...

Mags said I looked like a rock star in that shot -- so we decided we'd pose for cover art for our CD.  You know.  If we were rock stars.  And did a CD.  What do you think of this:

We liked that one a lot!  Since I did a solo shot, Mags figured she would, too.

A lady who was walking up the trail stopped and said we looked beautiful ... so I'll bet she'd buy our CD!

It Wasn't Our Fault

Greetings to all!  It's me, Mags.  The other morning, we took a water break near this lovely stone bench.  We had a nice, long drink, Mom gave us a couple treats, then Ragnar and I hopped up on the bench.

I know.  Rather out of character to be so very cooperative, but ... I mentioned our mom had treats, right?

They were the good kind. 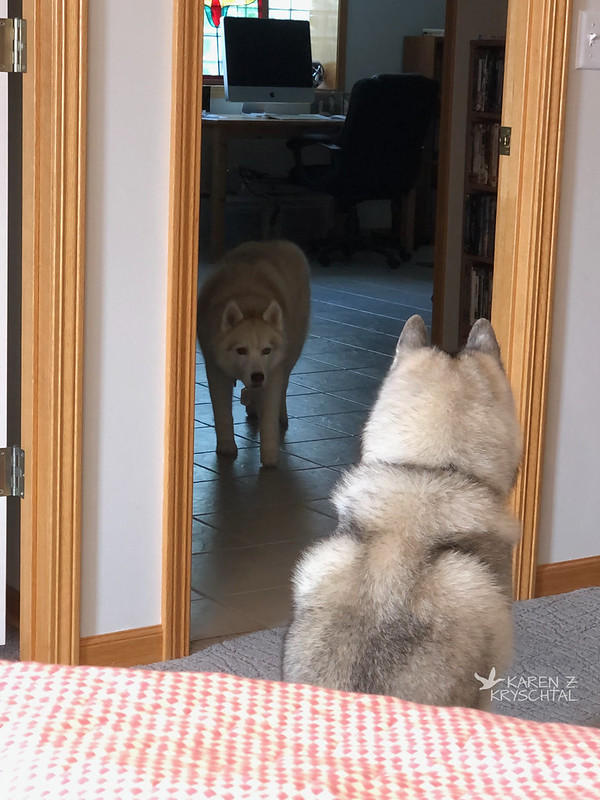 Greetings to all!  It's me, Mags.  The other day, Ragnar and I were hanging out together in the backyard, doing some exploring, some playing, and some posing (of course).  By the time it came to posing on the upper tier, I was getting a wee bit bored ...

I have to agree with her there!
Yours sincerely,
Margaret Thatcher
Posted by The Army of Four at 1:02 PM 3 comments:

Hi everybody!  It's me, Ragnar.  As you know, Mags and I had a very busy weekend.  On top of all the walking and general work around the house, we also helped a LOT in the Studio.  Oh, sure we took a LITTLE time out to relax ...

Anyway, Mags was right over here ...

Hi everybody. It's me, Ragnar. For Serene Scenery Sunday, we just wanted to share one more photo from our trip down to Council Grove.

It was so peaceful, so beautiful on that sunlit lane!

Have a wonderful Sunday!

Greetings to all!  It's me, Mags!  Wowzers, did we ever have an adventure this morning!  We all piled into the HR-V while it was still dark and drove down to the town of Council Grove! 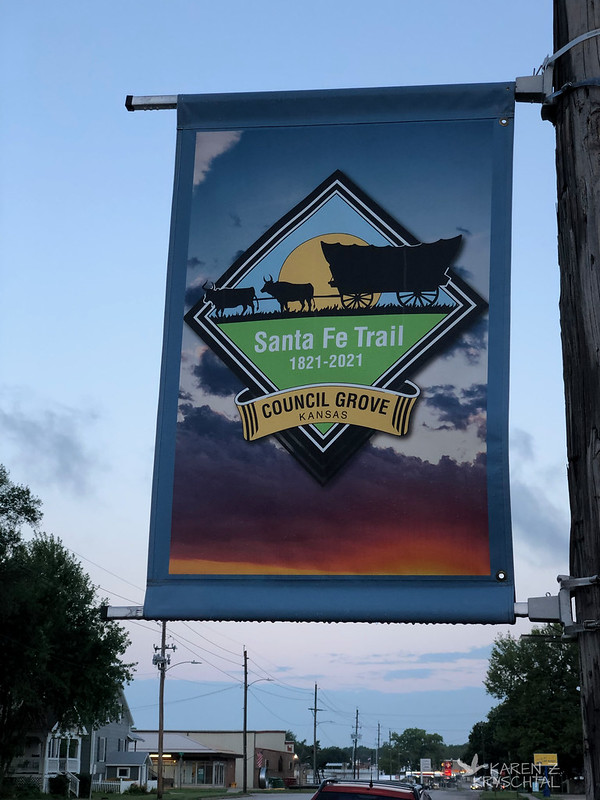 Council Grove is a small town steeped in history! The town itself is named for the Council Oak, a tree under which a council of U.S. commissioners and the chiefs of the Great and Little Osage tribes negotiated a treaty in 1825. The treaty granted the Americans and Hispanics right of way on the Santa Fe Trail - through Osage territory - in exchange for a payment to the Osage. The tree itself was destroyed by a storm several years ago, but the stump remains under a protective canopy. Council Grove served as the last opportunity for Santa Fe Trail travelers headed West to pick up supplies for their journey.

There are tons of historic things all over town. Here is a shot of us by a memorial to WWII soldiers from Council Grove: 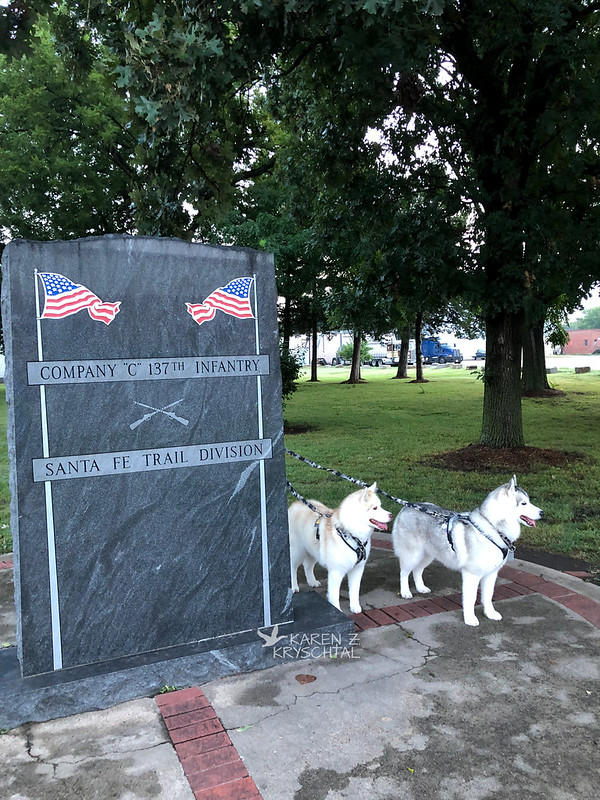 We found a park with cool things in it like this train engine!

It's not a real train engine, but Mom wouldn't let us climb on the real one. Something about my feety-feet getting stuck in the metal grating. What.  A.  Killjoy!

We walked through town until we found the Flint Hills Nature Trail and explored that for a couple miles:

The trail is a former railway line (rail to trail) that stretches 117 miles. We didn't walk the whole thing.  We did check out the road it crosses: 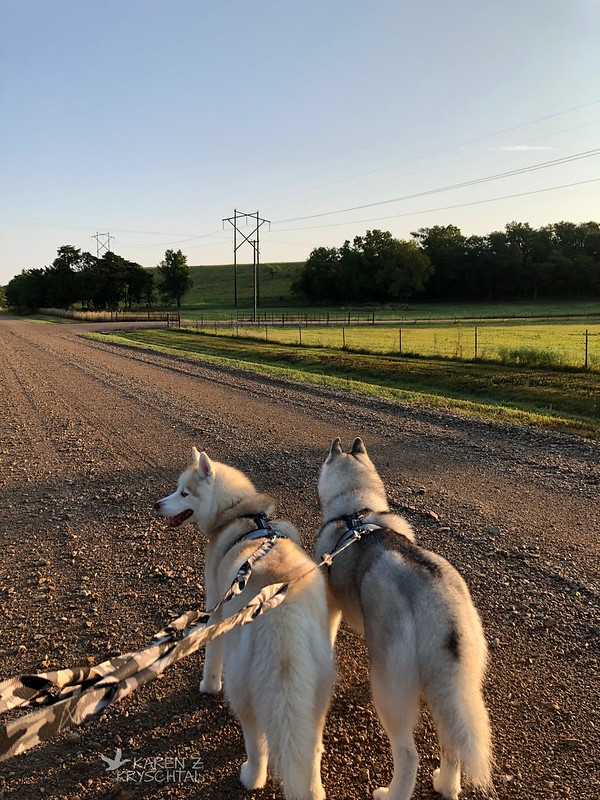 Back in town ... this is a statue called the Madonna Of The Trail: 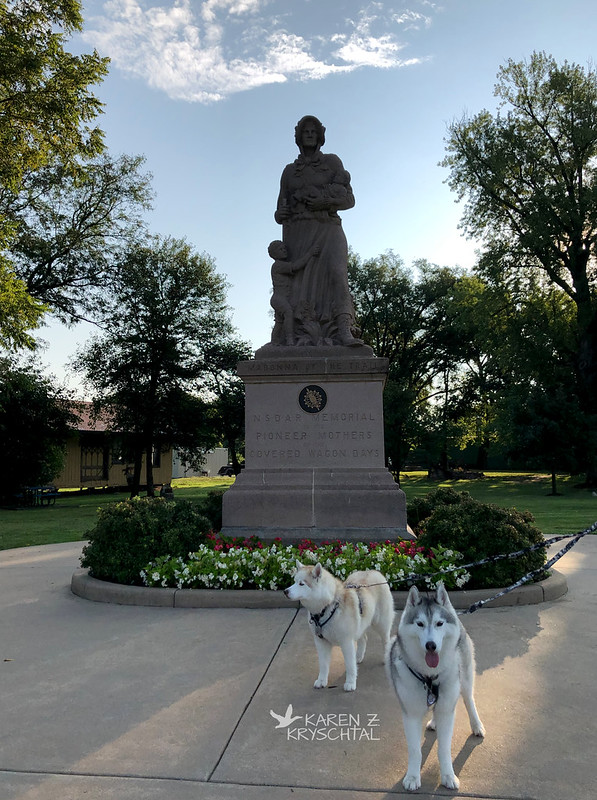 It's dedicated to the spirit of the pioneer women in the US. Being named after a strong woman myself, I salute these brave frontierswomen!!!

We also found a statue called Guardian Of The Grove, a depiction of a Kaw warrior: 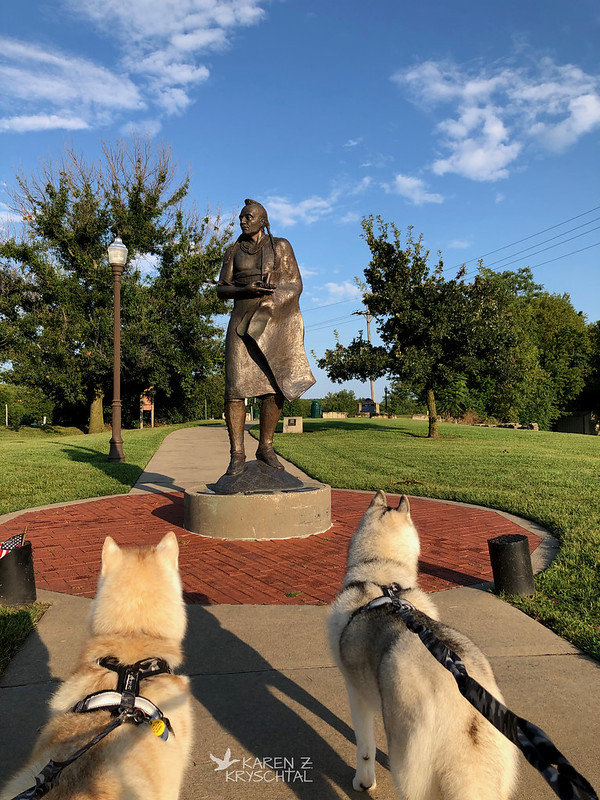 The statue contains a lot of symbols important to the Kaw (also known as Kanza) Indian Tribe whose last Kansas home was located in Council Grove. Kansas was named for the Kanza Indians!

We also found a beautiful river walk along the Neosha River:

Yes, there was a bridge across the river, and YES, we got to cross it!!! A definite highlight! 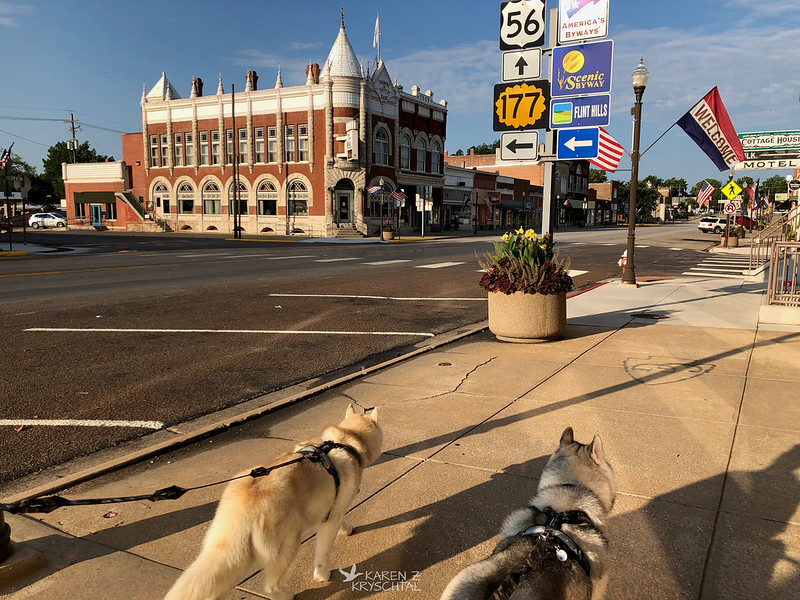 In case you ever wondered how big (or not) the covered wagons were that the settlers used to cross the prairie: 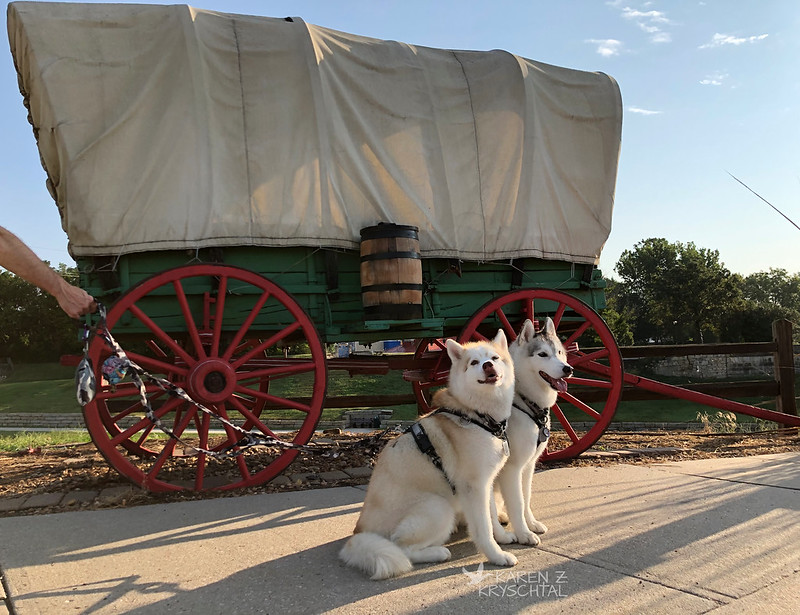 Yeah. That would make for quite the long journey! Before we left town, we ran into a Kansas celebrity and stopped to pose for a photo with him:

He seened a bit stiff. I think he needed that infamous oil can there at his feet!

What an AWESOME adventure! Thanks for coming along with us!

Greetings to all!  It's me, Mags.  Ragnar and I did a little backyard garden posing this morning.  Here we are, up by the top gate:

What can I say?  We were tired; Mom had treats.
Have a great weekend!
Yours sincerely,
Margaret Thatcher
Posted by The Army of Four at 1:10 PM 6 comments:

Hi everybody!  It's me, Ragnar!  Last weekend, when we were at Fort Riley, I found this super-cool brick path.

There's only one thing to do when you find a cool, old path - right?!?

It only goes from the parade field over to the museum area, but it was VERY fun to walk on!  It kept us busy while Dad spent time at the memorials, it was very historic, AND a certain grey and white puppy that you all know may have found a cicada while walking in the steps of history.
Sköl!
Ragnar
PS:  It was nice and crunchy!
Posted by The Army of Four at 1:27 PM 4 comments: 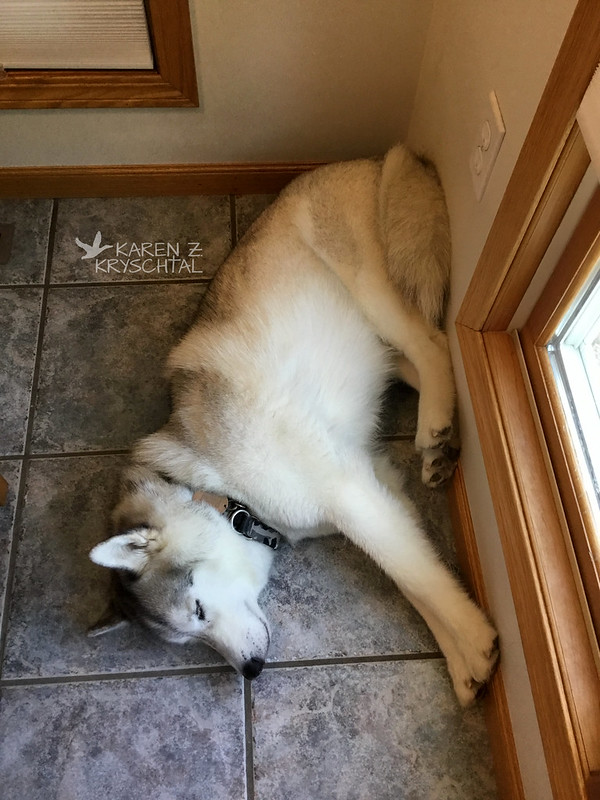 Greetings to all!  It's me, Mags.  As I mentioned yesterday, Saturday afternoon we hit CiCo Park to check out everyone who was there for the Junior Rodeo.  We had a blast - and of COURSE we had to swing through the park on our Sunday morning walk.

We greeted all kinds of horses, sheeps, goats, cows, and calves ... but I have to admit.  I had a favorite.  Check out my new friend, Spot:

Is this the cutest calf you've ever seen!?!?  We really hit it off.  I think I'm back to asking Mom and Dad if Ragnar and I can adopt a baby cow.  They really seem to like us.

Yes, It Did Get Even Better!

Greetings to all!  It's me, Mags!  Remember how yesterday, as Ragnar was wrapping up our trip to Fort Riley?  How just when he thought the day couldn't get any better ... we found a bridge?!?  Well, guess what?!?  The day got even BETTER later on!!!

When we went out for a potty break after lunch, Mom thought she heard the PA system from the park.  It's about a mile away, but sometimes you can hear things like that.  It could have only meant one thing -- something was going on at CiCo and we NEEDED to check it out!  Dad said we couldn't count on whatever event it was being there Sunday, so we all headed to the park.  And guess what?!?! Junior Rodeo time!!!

The park was packed with all kinds of FUN!  We really liked these horses, so we sat and admired them for a few minutes.

We also saw something we'd never seen before -- the Heel-o-matic 2.0.  When I read it, I thought it was so a steer would heel on a leash or something, then I realized it's so the cowboys and cowgirls can practice their roping skills!

Yes, but just past the goats were ...

See what I mean?  Just when you think the day couldn't be better ... you get a bridge ... AND a Junior Rodeo!
We did go back Sunday morning and everyone was still there after all.  I'll fill you in tomorrow!
Yours sincerely,
Margaret Thatcher
Posted by The Army of Four at 2:26 PM 3 comments:

Hi everybody!  It's me, Ragnar, here to tell you a little bit more about our very cool trip to Fort Riley yesterday!

As Maggie mentioned, once we left the reviewing stand, we headed over toward the US Cavalry Museum.  There are all kinds of touching memorials over there AND lots of awesome tanks, artillery pieces, and personnel carriers used by the 1st Infantry Division over the years.  The first thing that caught my eye was this cool tank:

Mags thought we should pose by it!

We decided to move on.  We found a Stuart Light Tank and tried a pose by that.

And she says I spend too much time with Mom!!!

What Mags saw is this very special statue:

The statue was given to Fort Riley by Paul Mellon.  Mom and Dad were there for the dedication in the 1990s, when Dad was still on active duty.  Mellon served and trained at Fort Riley during WWII and was very proud of his service. It's a very touching memorial.

Also on the subject of horses, we did a little more walking and found the Duty statue.

The statue honors the cavalrymen and horses who served our nation!

And speaking of horses ... did you know there are horses assigned to Fort Riley?!?  And you know how much Maggie and I love horses!  We HAD to walk over to their stables to see if they were there!

They were in there -- we could smell them and hear them!  They must have been working, though -- in a meeting or something -- because no one came to the door.  Mom and Dad said we'll go to Fort Riley again and take another shot!

In the meantime, here's a photo of them in action, courtesy of the US Army and the Commaning General's Mounted Color Guard webpage:

You can read more about them here.
It was starting to heat up, so we headed back over to where we'd left the vehicle.  We got to walk on the trail we started out on a bit more and JUST when we thought the day couldn't get any better ...
I mean ... really!  What a GREAT adventure!
Sköl!
Ragnar
PS:  Have a serene Sunday!!!
Posted by The Army of Four at 2:12 PM 4 comments: