Woo, everypup and almosteverycat.  It's me, Dave.  As Zim mentioned on Tuesday, we apparently weren't too cooperative for our Flag Day/US Army Birthday photos.  I'm not too sure what Mom had to say about that; I wasn't really paying much more attention than Zim was.  Anyway, Mom sure downloaded tons of pictures - you saw some on Tuesday and another one yesterday.  While she was shooting yesterday's, there was a lot of talk from Mom about "nonoZimmiegetyoursnooteroutoftheplanter!" but Zim said it was Wordless Wednesday so he didn't want to put that part.  Besides, he wasn't really listening anyway.  Ha woo.

I have more of the good ones to show you today.  I'll just sort of narrate what was going on.

In this one, I was pretty sure I saw some cats in our garden.


Zim saw them, too, and gave them his million-dollar smile.

Then I saw Maude the Bully Cat (TBC) and gave her my warning:


Mom could have offered a whole watermelon at that point and I really wouldn't have cared.  TBC was on the prowl and I wasn't going to let her invade our space.  (Again.)


I think somebody slipped some silly sauce into Zim's breakfast, 'cuz he just couldn't stop laughing the whole time!   Mom said a whole lot of stuff and I think she might have even offered me that whole watermelon if I'd just look at the camera... but I just couldn't do it.  She finally said it was time to go inside.  Zim was a bit concerned about her.


I think maybe the heat was getting to Mom.  We went in and decided to come out again in the late afternoon.

You KNOW what I had to do before we could start posing for our afternoon session.


I had to make sure the coast was clear.  I thought maybe Fluffy Black Cat was over in her yard and Zim thought Maude had gone home, so we checked for them both.


I was pretty sure Fluffy Black was over nosing around in our Mums, but she's never threatened any of us, so I'm cool with her.  Zim gave up on TBC and Mom pretty much gave up on trying to get us to pose together ... but Zim didn't give up on Fluffy Black.


At least the plants in the big pot look like they're looking at Mom, with big geranium eyes.  Ha woo.

Mom decided to get between Zim and Fluffy Black ... and got this shot: 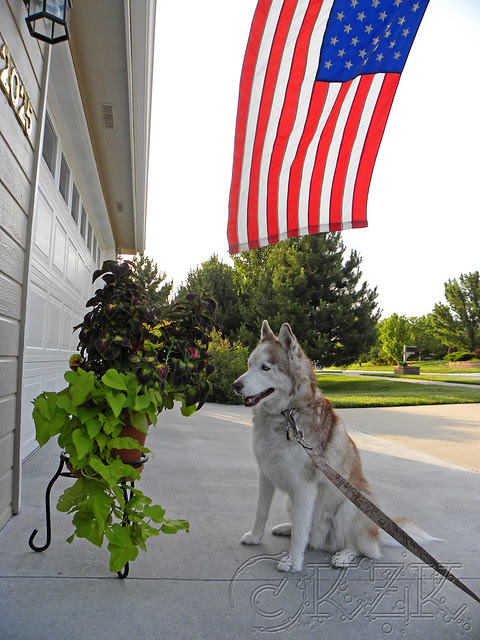 I think that was right after the one of Zim with his nose in the plants, but Mom said "Good enough!" and called it a wrap.
I hope you enjoyed our photo shoots for Flag Day and the US Army birthday!  Now let me go see if Mom was serious about that whole watermelon.  Or at least a little piece of the cantaloupe she sliced up last night!
Luv,
Dave
Posted by The Army of Four at 9:48 AM