Greetings to all, it's me - Maggie.  To help you all feel nice and serene today, I thought I'd share some of the photos Mom took out at Tuttle Creek State Park the other day.  Grab a bowl of water, get comfy, and prepare to get mellow with me.

This is the first birdie Mom saw:


Hmm. Not sure how serene that is. How about a wildflower instead?

Mom saw an Indigo Bunting right near where they parked:


Out in the River Pond, there was a Great Blue Heron with a fish:


Mom said he kept flipping it around, dunking it in the water, and was just sort of playing with it for quite a long while! She couldn't figure out what he was doing - but I know what it means when I do that with something. He was checking for a squeaker.  No, seriously. Sometimes you have to squeeze something in JUST the right spot to get it to squeak. She should have taken me with her - I could have explained that.

Anyway ... as Mom and Beth and the Border Collie boys were walking along (we don't let Mom go out alone, you know) they heard a ruckus up in one of the trees between the River Pond and Willow Lake - lots of rustling and squawking! Before either Mom or Beth could fire off any photos, it was all over - but apparently a Green Heron and a Great Blue Heron were fighting! Who won? Well, the Green Heron was the one still in the tree they were fighting over!

On a more peaceful note, here is a little Spotted Sandpiper down near the waterline: 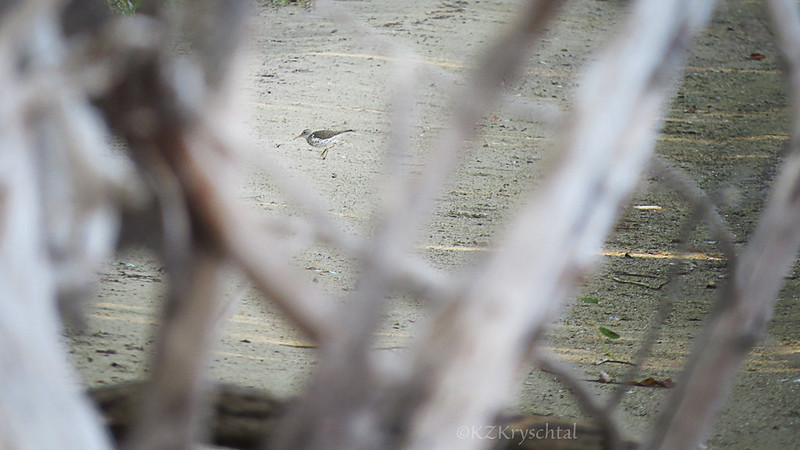 Mom had to shoot through an old tree to get that. And apparently go down a steep bank. And allow every mosquito in the state of Kansas to --- MOM! It's SERENE Scenery Sunday!

Sorry. Sometimes she does a bit more than just type for me. 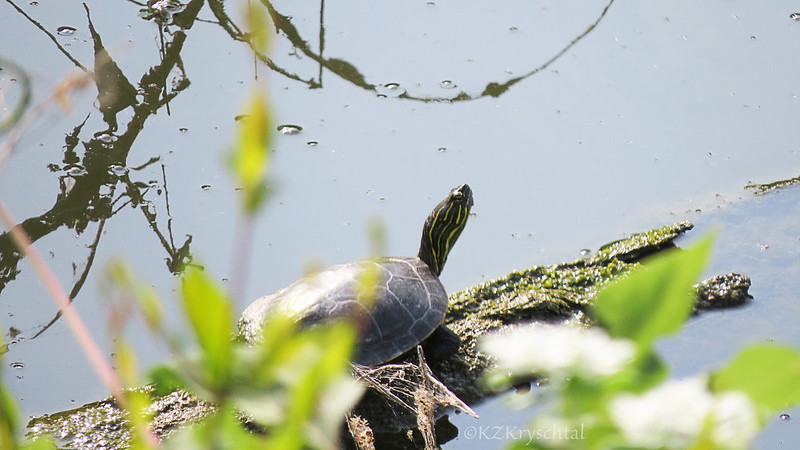 And another Great   Fairly Good Blue Heron; he looked like a minister calling everyone together for prayer:


Speaking of which, here's a Cardinal:


I think it's actually a caterpillar of some sort, not a grub... but it was a nice thought.

Mom was most thrilled about seeing a Kingfisher - and having it hold still long enough for her to snap a shot:


Her shot-of-the-day is this baby Eastern Phoebe:


Does anyone need to take a break to get more water or anything? OK.

Mom and Beth saw a bunch of tiny vireos and gnatcatchers flying and hopping in and out of some bushes. Mom said they were so small she thought they were Hummingbirds at first - then thought to herself, "Don't be silly. There aren't any Hummingbirds out here." Not ten seconds later, look at who she saw:

Beth, Mom, and the Border Collies crept very quietly towards the swampy shore of one of the beaver ponds in the park. Without knowing it, they got right up on a pair of Wood Ducks! They were maybe more surprised than the ducks! The ducks took off right away, of course, but Mom was able to get one shot off:


Blurry, but you get the idea! Wood Ducks are very shy; Mom and Beth were thrilled to get so close to them! I'm sure Moss and Seamus were, too.

Here's one of the more startling things they saw:


Mom said it was a carp swimming in very shallow water - but I'm pretty sure she just said that so Cam and I wouldn't be worried about her getting so close to a sea monster!

And to close on a serene, peaceful note, how about some love from a Yellow-Shafted Flicker?


I hope you feel nice and serene now! Have a lovely Sunday!

PS:  If you'd like to see more photos from that outing, please click here.
Posted by The Army of Four at 2:13 PM