Greetings to all!  It's me, Maggie!  Remember we told you we celebrated New Year's Day by going to Quivira National Wildlife Refuge?  We said we'd eventually share some of Mom's birdie pix with you and I figured since we're stuck inside today due to the ice storm, this was as good a time as any!

Ready to take a look?


One of the most exciting things we saw was a Great Horned Owl!


Yes, a Great Horned Owl!  They are nocturnal, so Mom was very surprised to see him in the middle of the morning!  In fact, if Dad hadn't spotted him from VERY far away, she never would have seen him.  Way to go, Dad!  Even though we hear them at night sometimes, Mom has never been able to photograph one in the wild, so she was super stoked about it and considered him a "lifer" (first time sighting).

The other "lifer" for that trip was this tiny birdie:


Maybe not as dramatic as the owl, but it's a mighty cute birdie!

Since we were in a marsh area, we saw some ducks and geese where there was open (non-frozen) water, and several flocks of geese flying overhead.  Here is part of a small flock:

I wonder if anyone noticed him?

We saw LOTS of raptors, too!  Check out this guy:


I'd hate to be a mousie on the receiving end of that flight!

Speaking of flights ... here is a shot of two Bald Eagles in flight:


They were playing "King of the Branch".  The younger one won that round, but the adult prevailed in the end.  Check him out - he looks like he's posing on top of a trophy!


They put on quite a show!

Here's another look at an adult in flight: 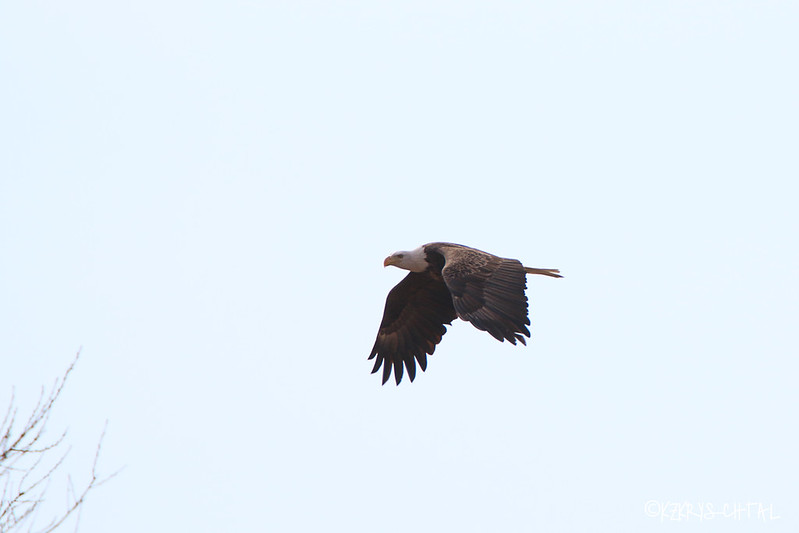 The other raptor we saw in good numbers were Northern Harriers.  Mom usually sees females, which are darker in color.  She was excited to get some shots of a male that day:


Getting back to water birdies ... we only saw one Heron.  This guy was out fishing with some ducks:


Here are some more ducks:


It was a great trip!  For more photos, to include a whole series of Bald Eagle shots, please visit our FlickR album at this link.  It's a two-page album (Mom couldn't help herself).

That's a wrap for now.  The ice storm is on us now, and will be, off and on, through tomorrow.

Yours sincerely,
Margaret Thatcher
Posted by The Army of Four at 10:18 AM