Greetings to all!  It's me, Maggie.  The other day, my mom got a call from our friend Aunt Beth.  It would appear that one of her Border Collies was going to be starring in a commercial for the Veterinary Health Center at Kansas State University and ... did we have a football?  This is the only one we had: 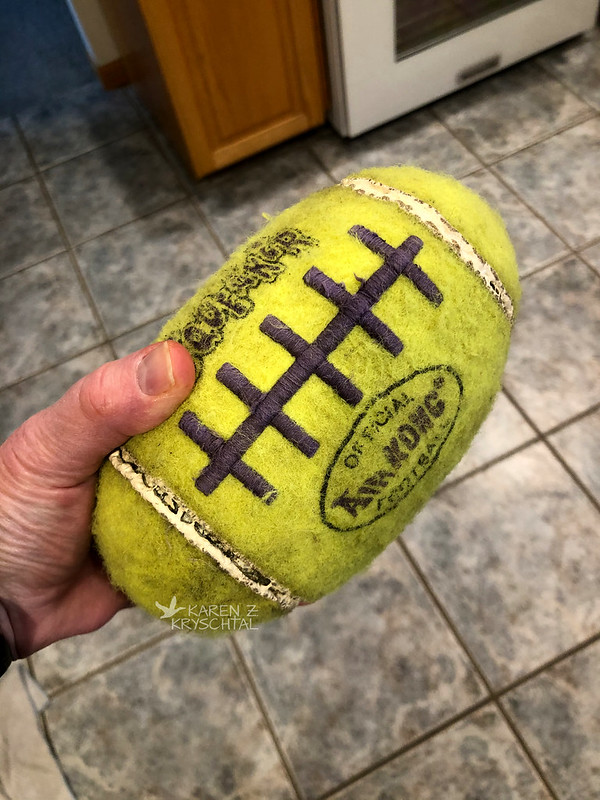 Oh, right. I know. You're thinking, "Why didn't your mom toss it to you, Maggie? Then you could see if it's catchable." Yeah. Only I don't catch. I just don't. It's a Siberian thing.

To make a long story short, we squared Aunt Beth away with a football stuffy - and later learned Flynt did an AWESOME job with it! If we get a link to his commercial, we'll link it up! But now ... what to do with our football? It's normally an "outside only" toy, but Mom decided since it was in the house anyway ... she and I should play a little football!

She threw it a bunch of times and I blocked it; I zoomed and zoomed and ran and ran; I had a ball! And then ...

Then Mom threw it for me a few more times and ...


Isn't that amazing!??!  I mean, don't they always tell football players to "attack the ball"!?!  I think the Kansas City Chiefs could use me, don't you!?!?

Mom was so proud of me, she posted this next photo to FaceBook:

Mom says I have some serious skills.  All I know is I had a ball!

Yours sincerely,
Margaret Thatcher
Posted by The Army of Four at 10:44 AM