Our Sunday Walk, Pt. I

Hi everybody!  It's me, Ragnar.  Actually, maybe this should be Part II, since Mags started telling you about our walk yesterday, but Mags said to call this Part I. Now I'm all confused.  Anyway, we went on such a cool walk yesterday - up and down the main street through our downtown area!  Here's the "up" part.  The first part.  Oh ... I get it now.  Maggie's so smart.

We parked in a lot off the end of the street, went around the corner, and there it was!

She had never been downtown, either, but she knows stuff like that.  We made our way over to the sidewalk and took a stroll down Poyntz Avenue!
There were a lot of these stickers on buildings: 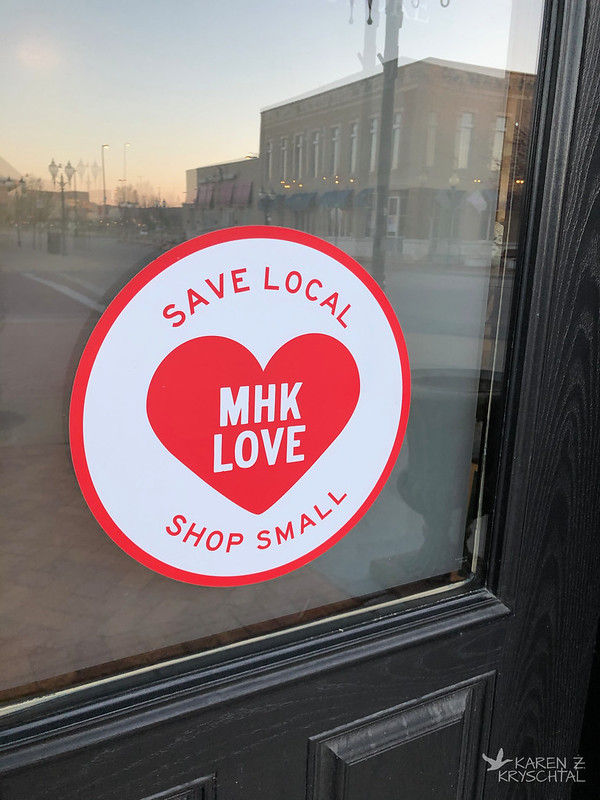 Many of the local, small places are hurting (or even went out of business) due to the restrictions put on them by the governor and the local city commission in the name of COVID.  I'm sure it's the same in your town, too.  One thing our city permitted eventually was building these outdoor dining places, so the restaurants could try to stay open:

They used federal grant money, so thank you, US tax payers.  It has helped many of the small restaurants.
She was right.  They weren't open.
Oh!  Before I forget, in that photo above -- you can also see the Wareham.  Or Wareham Opera House.  It's quite the landmark in town - built in 1884, then a guy named Wareham installed electricity in 1893 and named it the Wareham Opera House.  Eventually it became a movie house - up until 1986 - then it became an event center.
Moving right along ... eventually we were right across from City Hall:

City Hall is right across from ... City Park!!!  We hopped up on a wall and struck a pose:

Mom spotted this fun mural on the side of a building:

We felt kind of tourist-y doing that, but Mom insisted.  And she had cookies.

Up near the very top of Poyntz, we found a castle!

Castle Kimball was built in 1894 by Judge Sam Kimball, one of the town's founders.  It's a huge, beautiful place!

Right up at the very top is the West Campus of Manhattan High School!

Neither of our parents grew up here, so they didn't go to MHS, but still - gotta support the home team, right?!?
So ... we discovered something else EXTREMELY interesting just past the high school -- be sure to tune in tomorrow and Mags will fill you in!  In the meantime, thanks for coming along with us!
Sköl!
Ragnar
Posted by The Army of Four at 2:42 PM