Mom and Dad have put a lot of work in already this year!  I think it started back even before our big pines were taken out ... but anyway, they did a bunch of stuff, then this guy came and dumped a bunch of mulch in our driveway.  Twice!  It was a huge pile - show everyone, Maggie!


The man who dumped it on our driveway thought it would take Mom and Dad a couple days to load it up, haul it to where it was going, and spread it in - but they were done by two o'clock - and that's with a break for a nice, long walk with us and also for lunch!  Mom and Dad must have some Working Breed in them.

Let's look around at everything!  Here's one of my favorites - the Peonies!


Aren't they pretty?  They are just now blooming!  Here's a close-up!


In that front bed, Mom planted some new Hostas.


Here's a view of them from down on the next tier down: 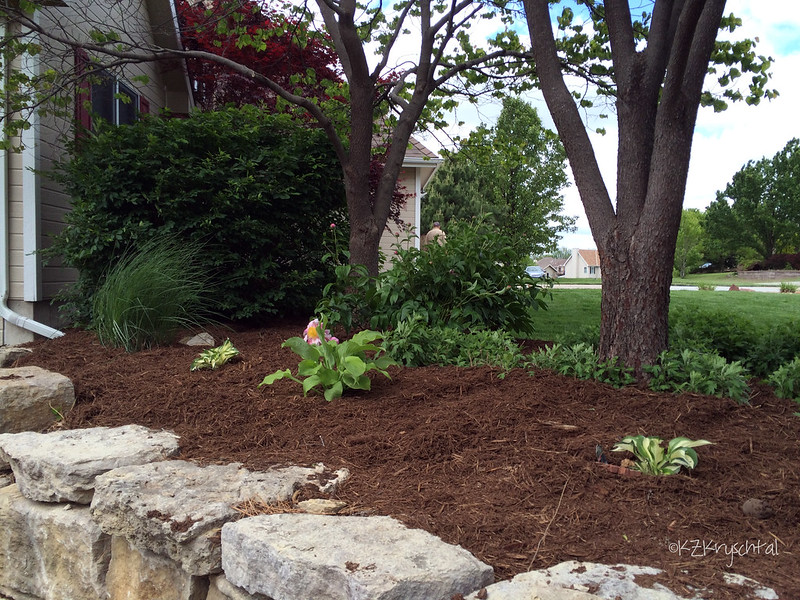 They are back behind the Redbud Trees, Mums, and Peonies.

That next tier down is where a big Austrian Pine was.  Dad worked really hard leveling that bed out and digging yucky stuff up.  He and Mom decided since it's a nice sunny spot that it would be perfect for a Butterfly Garden!  Mom planted all kinds of things that will attract butterflies:  Butterfly Bushes, Butterfly Weed, Salvia, Agastache, Pincushion Flower, and some Blackberry Lily seeds that our aunt sent her.  Here's a look at that tier:


The flags are to mark where there are smaller plants (so Mom didn't accidentally cover them with mulch or step on them while she was working) or where the seeds were put in (so Mom won't think they're weeds when they sprout and pull them out).  It doesn't look like much now, but hopefully everything will take hold and do well!

Here's the next tier down:


It has some Coneflowers (which will also attract butterflies) and some Maiden Grasses.  It's hard to see everything - but here are the tiers on that side from down in the backyard:


It was quite a feat getting the mulch down to all the tiers.  Dad did that part, and Mom did the spreading it around part.

They also did the tiers on the other side of the house; they're smaller, but also harder to get to.  Here's a look at them from up on our back deck:


I like to check the Honeysuckle vines that grow along the steps!


You never know.  There could be a bunny or a birdie or something hiding in there!

Mom put a new little plant called "Hen and Chicks" in the front rock garden.  Here is Maggie, helping Mom check on them.


It should like the hot, full sun and rocks out there.

That's pretty much of a wrap for now.  Mom bought some new garden flags that she'll be switching out every so often.  I'm fairly sure we'll be asked to pose by them.  Like this: 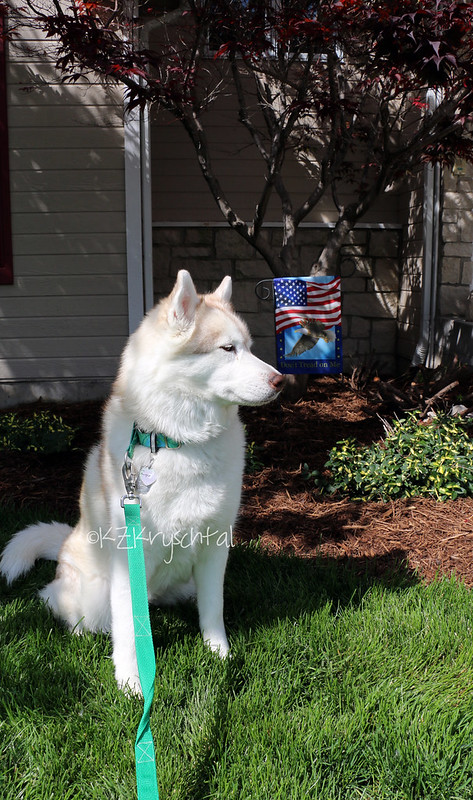 Mom didn't have treats, so looking at the camera was pretty much out of the question.

I hope you enjoyed our garden tour!  Have a great Monday, everyone!