Ha roo, pups. It's me - Stormy. This always being a bizarre part of the country when it comes to springtime weather, we had a break from our sub-freezing weather - a weekend with temps in the 60s and 70s. I know! Horrible! But it made the bipeds happy. Dad got some golf in and when he was done, we all went on some great walks. We even had Mom bring the camera with us. That starts the explanation of yesterday's post by Dave. Sigh. Dave.

Anyroo, he thought from a distance that he saw his old friend Wonky. Not long after Dave ripped off, swallowed, then horkaed up two of the Octopus' legs, Wonky disappeared. Dave is still hoping he'll turn up somewhere. So when we walked past the playground at the school over the weekend ... well, you saw his post from yesterday.

I warned him. I told him the real Wonky sleeps with the fishes. But he had to check out that overgrown Wonky anyway. I gave him the same caution that Tansy posted -- that it could be the Giant's Wonky toy and that he'd best be very careful! (Tansy is as wise as she is lovely!) I think that's when it hit him ... 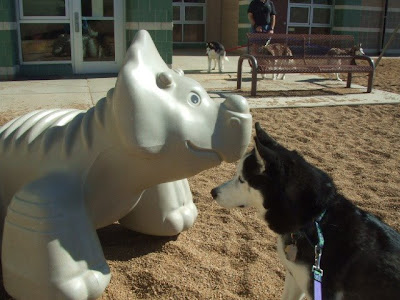 Say... you're not MY Wonky friend!
You can almost see the disappointment in his face, can't you? He knew. 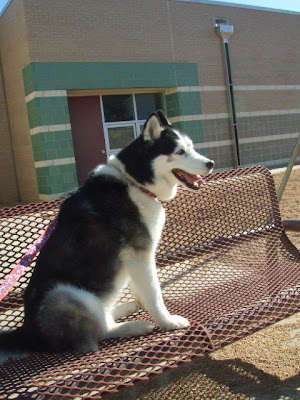 It was worth checking out. And the playground offered some fun times. I had a nice, comfy perch where I could watch over Amber and Zimmie playing. 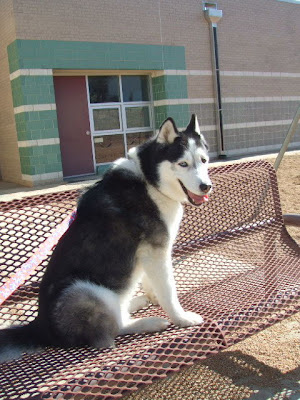 My puppies are having such fun!

Look! Here is Dad offering to push Ammy on the swings. 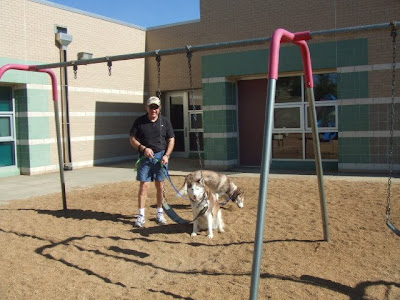 Looks like Zim found something to snarf up in the background!

Tomorrow, Zim will share his fun with all of you! I'll give you a hint about what he found to play on ... he's brave like our friend Steve! Until then...