Hey everypup! It's me - Stormy! As many of you know, I just love puppies. Imagine how delighted I was to see an email from our Aunt Janet the other day about a puppy her neighbor rescued! Well... sort of. Here's a look at the dear little pup. 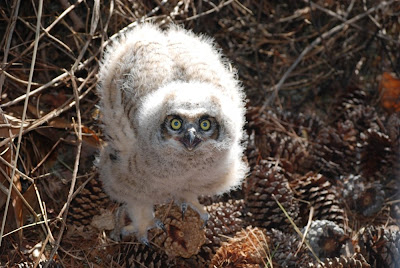 Who?
Aunt Janet said he is a baby Great Horned Owl. He fell out of his nest and into the canal/creek that runs behind their house. Oh no! Poor owl-puppy! Her across-the-creek neighbor fished him out with her pool skimmer! She watched over him and made sure the owl-puppy's mama came back and took care of him. Whew! Aunt Janet said he was cute ... but really mad! I would be, too, if I fell in the canal!