Comments of the Week

Ha roo, readers! Storms here. A couple weeks ago, we decided to start a new feature called "Comment of the Week". It seemed like a really good idea at the time... but as our pal Ari said, "That's great! But now we feel commenting stage fright: we'll have to try to think of something clever to say later this week!!" Oh, no! We were afraid of that!

In re-thinking this whole thing, perhaps it's more of a chance for us to respond to questions posed by our readers, or to give more info on something! Does that take any heat off? We're all about lowering the heat - ha roo roo roo! We'll try to come up with another name for this feature!

We also want to assure you that we will still do Sunday Salutes! Ruby was very sweet and said, "Wow...what a great idea! Comments always make me laugh!!! I hope Sunday Salute doesn't go away furever tho'...I always enjoy reading them!" Thank you, Ruby! And fear not! We love doing Sunday Salutes and will keep that feature!

On Zim's post of More Out-Takes, Holly left a great comment! She said, "Love the outtakes!!! Hey Ammy, what's up with the Malamute ears? Haroorooroo!!!" Ah, yes. Our little Ammy and her sweet ears! They are darling, aren't they? And very Malamute-like! Her bio-daddy had ears like that, as did her Uncle Mal (a Sibe-Mal mix). You can see pictures of both of them at this post. Even though Ammy came with papers... well, let's just say she's much taller than breed standard and it seemed like Uncle Mal was mighty sad to see her go! :)

Another of Zim's posts brought on a great comment by Steve. Zim told everypup about his trip to Starbuck's. He had a great time; he's been wanting to go there forever! Steve asked a very insightful question in his post script. He wondered, "...How's Dave? Did he survive being separated from your mom?" Well, Steve, it was pretty rough for the Deeve. The lad is mighty Mom-centered, as you know. Mom and Zim were gone an entire 25-30 minutes, which was 25-30 minutes too long for him. Here he is from yesterday: 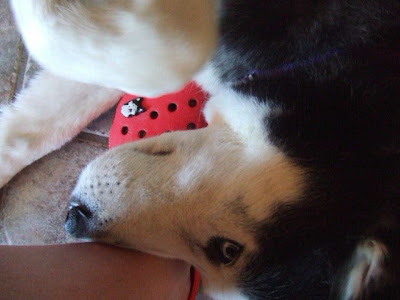 Before I sign off for the day, I also wanted to show you how our little birdie-pups are growing! Look at how adult they look already! 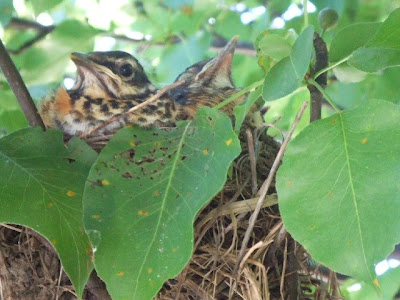 Aren't they lovely?!! The parents are doing a splendid job with them!

Thanks for reading, everypup and kitty! And please keep those comments coming!