This week our Sunday Salute goes out to our very good buddy Thunder of Overland Park! You've seen us salute this hard-working, adorable Siberian before and now he's really earned more accolades. As Amber says, he's branched out into another line of work and we just had to share his efforts with all of you!

He told us all about it a couple weeks ago....

He asked all of us Siber-Malsf or the help via email. He wrote, in Khyraese, "...OK, pupsters out there, I need your help here. Over the weekend, I saw something in my yard that I thought would help Khat khover up the hole she had dug so her Mom wouldn't be mad at her." (For those who aren't aware, Thunder and Kat are quite the couple! Kat even has pictures of him in her and Steve's Clubhouse!) Always great to see a Sibe cover another Sibe's six! He continued, "BUT my Mom said I was digging again and I really didn't dig at all. There was this stikhk poking out of the ground and I thought I khould send it to Kat and she khould put it in her hole and push some of the dirt back in with her khute little snooter. So I just tugged on it a bit and whoa - out khame a big hunk of dirt all khlinging to this stikhk. I thought I was just so lukhky because now Khat would even have some extra dirt for her hole. But as I tried to get it to the gate, all the dirt fell on the ground. Then you-know-who khame out and said, 'Thunder, what are you doing?' I tried to explain but you know, she never listens." None of them do, Thunder. Especially when they incorrectly think you've done something "wrong".

Ever the brilliant Siberian, Thunder had photographic evidence to share with us, to prove he wasn't digging. He said, "In the first pikhture you khan see the beautiful round space, not a hole now, but a perfectly round space where the stikhk was before I pulled it out. And you khan even see the stikhk lying on top of the patio blokhk with some hairy stuff hanging at the bottom." 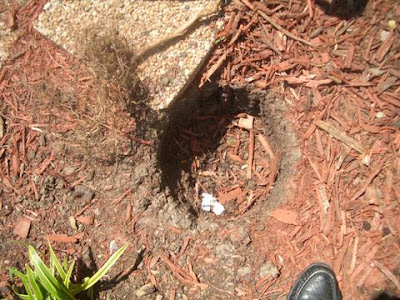 Got it, Thunder-Dunder. This proves nothing. "The second one," he went on to say, "shows you what happened to the dirt." 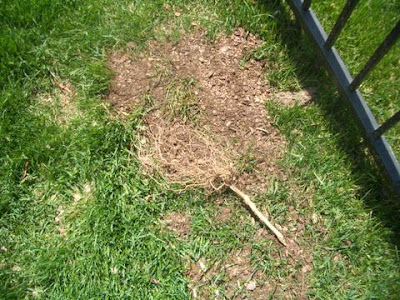 Hmmm... Zim, our landscaping expert, intercepted an email from Thunder's mom saying that the plant in question was a Crape Myrtle. Zim pointed out that it's important here in Kansas to prune crape myrtles way back in the spring; isn't it thoughtful of Thunder to help out like that!?!? If, indeed, he had anything to do with the transplanting procedure. Back to the photos...

"The third one shows you what my idea was all about for Khat to do." 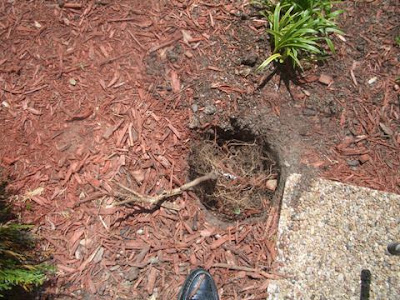 Oh, yes! Plug up the hole! How perfect!

Thunder finished presenting his argument with one last photo. "And the last pikhture," he told us, "is the best one of all - do any of you see dirty paws??? Dirty snooter??? How khould I look so khlean after digging? So Mom was wrong. Khase rested." 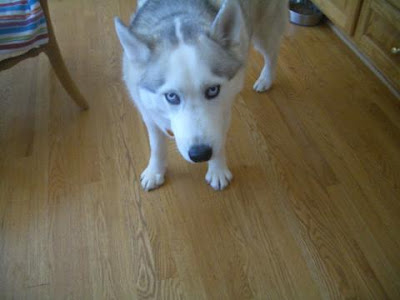 Look at that handsome, clean face! INNOCENT of all charges! Totally! How could your mom even think you had been digging?!?

Thunder, we think it's just great that you came up with such an inventive way to help the lovely and equally innocent Kat. And to help your mom with the gardening. For all you do, Thunder ... we salute you!