Ha roo, everypup! Sorry I'm putting up today's post so late - I had a very important meeting this morning! Some friends of ours were in town from Georgia to visit family and they came to see us! I was so excited - like the rest of the pack, I just love Aunt Sniggy and Uncle Mike! Then I learned some even cooler news! Do you remember way back a long time ago when we Saluted Slick? Well, he came with Auntie Sniggy and Uncle Mike! AND he brought his new little brother! Oh, wowzers! Mom and Dad said we didn't want to overwhelm the guys but that since I'm really good with other puppers, I could meet them! Ha ROO!

Here I am, meeting Slick! 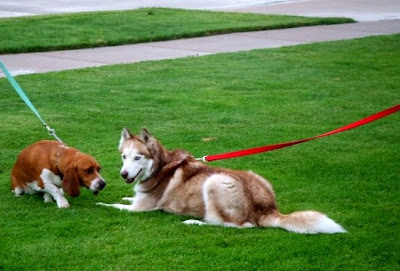 I got low and looked away, so he wouldn't feel intimidated. We hit it off just great. Isn't he cool? He's just over a year old and is a Beagle/Basset mix.

Check out this picture: 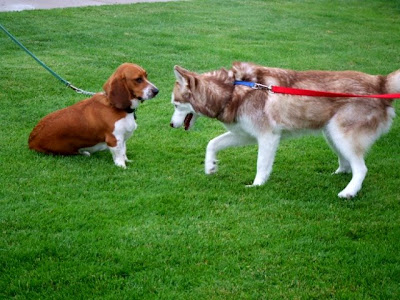 Auntie Snig said it looks like I'm saying, "Right here! I buried it right HERE! I'll have to show you later!" Wow. I knew she was real good at communicating with pups, but I didn't think she'd be able to figure that one out!

Then I got to meet his side-kick, Hank the Cow Dog. Hank is a 14-week old Basset Hound. 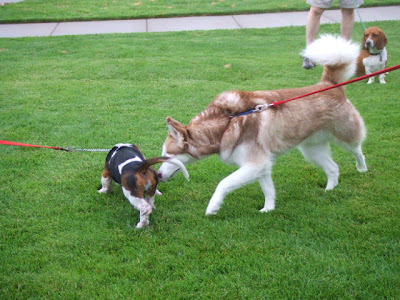 Check out his ears in this shot: 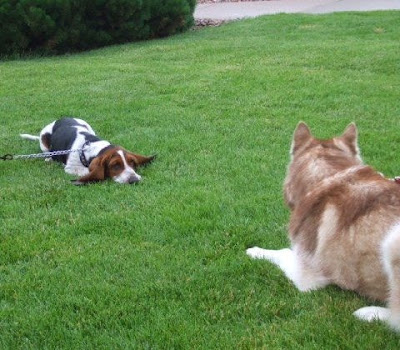 He kept tripping over them. I must say, the little guy was totally adorable - and was one confident pup!

My mom and dad just went bonkers over how cool Hank and Slick are. And I've gotta say... I liked both of them an awful lot, too! 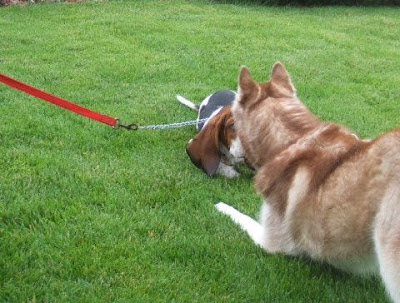 Here's a short video of me and my buddy Hank the Cow Dog. I do a lot of play bowing and stuff to make him feel at ease.

It started raining, so the bipeds decided to go have coffee on the screened-in part of the deck. Hank and Slick hung out there with them. Here are a couple shots of Slick: 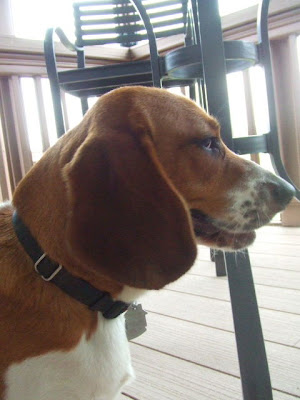 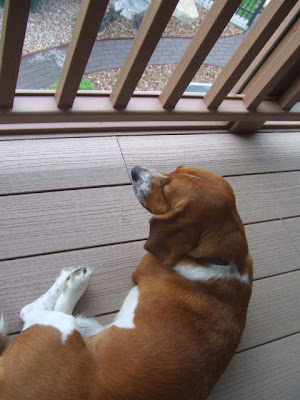 You can really see both Basset and Beagle in him, can't you? I think he and Hank enjoyed our view. Here's Hank: 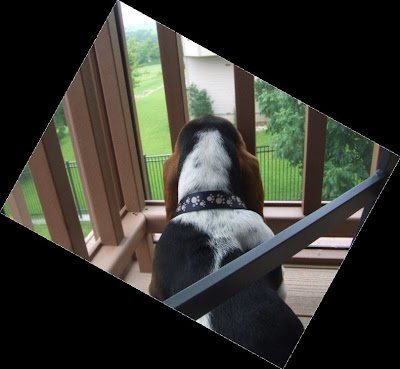 I think Hank might have smelled Oswald and family out there! I'll bet with the highly developed snooters those two have, Hank and Slick would be able to flush out ALL the bunnies in the yard in no time! (Oddly enough, even though Mom complains about how destructive Oswald et al are, she doesn't want to see anything happen to them. Can anyone explain that one to me?) Anyroo, here's one more of Hank the Cow Dog, snuggling with his mama! 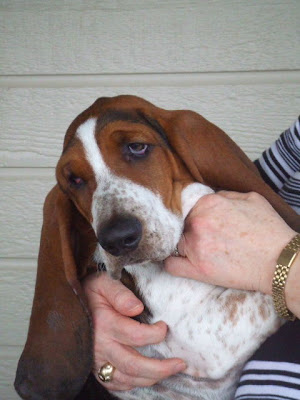 We just had a great time together and wowzers, was it great to see Aunt Sniggy and Uncle Mike. Storm, Dave and Ammy got to see the Auntie Snig, too, but only saw the pups through the door. Mom thought it might be too much for the little ones. Mom and Dad had a wonderful visit - and yes, Mom did try to steal Hank and Slick. Ha roo roo roo! Thanks for coming to see us!

Before I sign off, Stormy wanted me to make an important announcement! Her first correspondence course at the SZK School of Siberian Studies (Cooperating for Photos 1) went over so well, she's offering another class! Tomorrow, she has a special guest lecturer coming in to do a short course for the foreign languages department! Be sure to tune in - it's going to be really KHOOL!