Our Sunday Salute goes out to our friend Denali of Pennsylvania! The Salute also ties in nicely with many of the comments Dave received on his post yesterday. Many of our readers agreed with Dave that the bipeds who make Yoplait yogurt really need to use a more snooter-friendly cup. How are we supposed to be able to lick out every last bit of that yummy treat? Denali to the rescue!
We received a great email from Denali shortly after Dave put his post up. He told us, in part, "Use your paws to hold the Yoplait! ...Dewclaws do help, of course....." And he sent us this great picture! 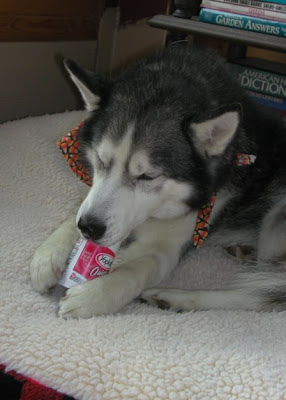 Denali - showing us how it's done!

Isn't that great!?!? Denali said, "Mom sent a copy of the picture to Yoplait back in 2003, so it is pinned up on a bulletin board somewhere at Yoplait HQ! Apparently they have lots of pix of people and 'others' enjoying their product. At the time, they would not accept digital pictures, so Mom made a print and mailed it. She got a nice thank you letter. (I was hoping for some free yogurt...)" Well, yeah. That's the least they could have done! We hope your mom gave you more yogurt!

Denali knows we believe in Safety First! here at Ao4 HQs, so he wanted us to remind our readers that pups should be supervised when given what he called "non-Kong treat containers". We totally agree! Denali and his pack-mate Rubina don't chew up non-edibles, but they're supervised anyway, just to be sure!

Denali has taught Rubina - or Ruby - a lot of things, but she doesn't hold her own cup. She gets frustrated and leaves it for Denali. Woo. That's a bonus! Denali said Ruby's M.O. is to scream until someone helps her with whatever she needs; he relies on his many physical talents.

Denali is a rescued Siberian who lives in Pennsylvania and works as a certified pet therapy dog at a big pediatric hospital! He regularly visits sick kids to cheer them up and comfort them. His mom and dad are very proud of him for doing this, as you can imagine -- he truly earns his treats! He has a very impressive group of "letters" after his name: CGC, TDIAOV. (TDIAOV is Therapy Dogs International Active Outstanding Volunteer - Denali has made over 150 therapy visits over the course of 6 years!)

Denali has some other rather special "skills" his mom didn't think we should mention. We, however, thought they were outstanding. Those skills include, but are not limited to:
His mom told our mom, "I must say, though, that his training and the commands he learned do help with the pet therapy work since he has to maneuver around a lot in the hospital. Before he started getting arthritis, he would leap onto kids' beds (with their permission and Mom's command). The kids would be grinning because they had a husky on their hospital bed--how cool is that???" We don't think it could get any better than that! Ha rooo!

His mom also said that Denali had lots things to learn when he came to his forever home and brought a lot of emotional baggage from being a stray --but how to snuggle was not one of them! (We're Siberians... it's what we do.) She also said, "And he takes treats very gently--I absolutely trust him to not grab at the teeniest child's hand or IV tubes or whatever. But I do not trust him to do a recall if he ever gets loose in the hospital!!" Oooh. Yeah. That whole "recall" thing ... also part of being a Sibe. Nothing personal. Ha roo roo roo!

Denali told us he was happy to share the yogurt-licking tip. We were so anxious to share it with our readers and really appreciate Denali sharing his MANY talents! 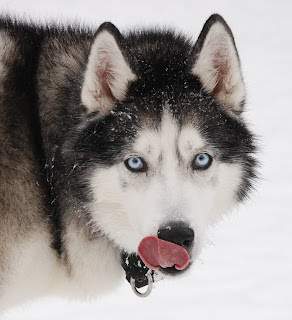 A look at Denali's tongue - an important part of the eating Yoplait technique
Thanks again, Denali! And for all you do, from sharing yogurt-eating tips to your important therapy work - we salute you!