Ha roo, everypup! It's me - Zim! I thought it was time for a Magic Bean Update! It's been a really hot, dry Summer, so that - combined with a late hard freeze back around Easter - has really taken a toll on all of our plants. Not to mention the bunnies and the bugs ... though I guess I just mentioned them! Mom said she's just happy most of our stuff is alive!
I went out through the screened-in deck and noticed something funny. Hey! What's this? 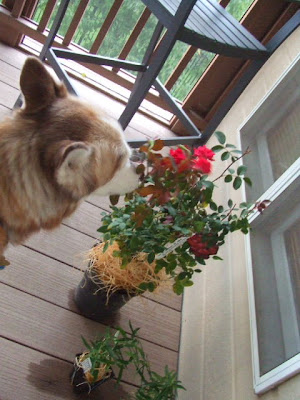 I don't remember having a rose bush here! And what are these little guys!!?!?
Mom said Aunt Janet sent us the rose bush and some butterfly weeds! Cool! Thanks, Aunt Janet! On to check out my beanstalks!
I wanted to be sure we were watering it well enough, so I stuck my snooter in there to investigate. 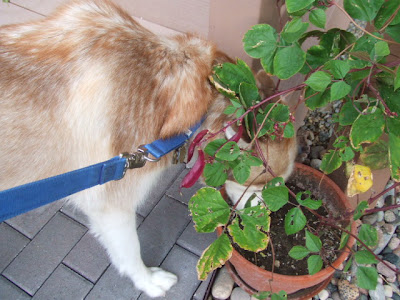 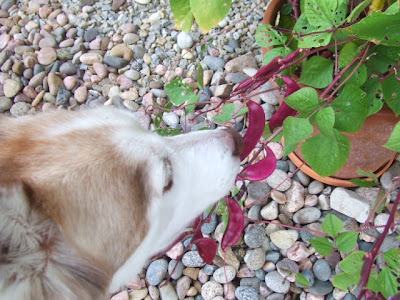 How exciting! We've got purple beans! This is so exciting! Our beanstalks didn't get real lush and plush and huge like they did the first time we grew them, but we had all those challenges I told you about before. Now that we have beans, Aunt Janet said we can leave them on the vine until they dry out, then save them to plant next year! How COOL! She's a Master Gardener, so she knows these things.

Here's what the line up of Magic Beanstalks looks like now: 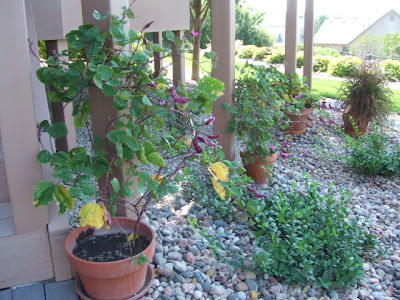 Pretty cool, huh? See the ornamental grass in the sort of upper right hand side of the picture? That's one of the Purple Fountain Grasses that was on the lower deck. Stormy told you about those a while ago. Mom removed a special kind of Euonymus Pauli bush, called a Dead Euonymus Pauli. It gets too wet there, so Mom pulled out the special plant, dug in a deep saucer, then set the potted Purple Fountain Grass on it. It's stable, and is elevated enough that the water problem there won't effect it like it did the Dead Euonymus Pauli. I'm pretty sure Stormy told her to do that!

Here's a shot of the Magic Beanstalks, the fountain grass (can you tell the wind was kicking up?), and hey - right smack in the middle! See where that white tag is? That's the rose bush! The two plants to the left of the grass are Euonymus Pauli that are actually alive. 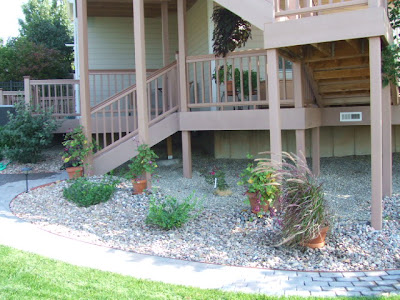 We really don't think the Magic Beanstalks will get much bigger, but we're really happy to have seeds for next year!

Here's where we put the Butterfly Weed plants in. 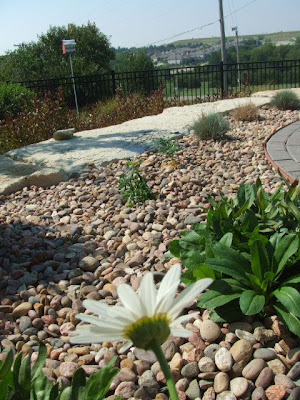 They're just beyond the Becky Daisies and (in this shot) in front of the Blue Fescue and the Dead Blue Fescue Grasses. They'll add a great splash of color down there, according to Dave!

That's my garden P-update for today! Isn't it exciting about the BEANS?!?!?!?