Roo, everypuppy! It's me ~ Amber! I've been reading my new friend Althea's blog lately and in it she has a couple pictures of her wearing a VERY pretty purple bandana! She looks really very nice and I told her how Davy wears a purple collar and he one time asked mom if he could wear her purple bandana and she said "yes" and it made Davy very happy. Here 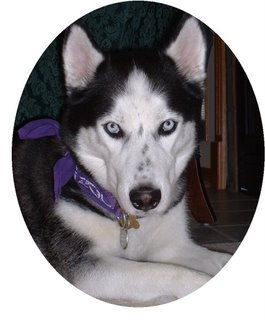 's a picture of Dave in his purple bandana.
Davy was about 4 years old when he adopted us and he was VERY nice when he got here and I don't really think he suffered from the kind of abuses Stormy and Zimmie went through but I don't think anyone ever really did nice things for him. When mom bought Davy his first collar just for HIM, he was so HAPPY and went prancing and play bowing all over! It was purple. (We each have assigned colors.) So then a couple summers ago, mom had poison ivy (not Ivy the puppy, but a bad ivy!) and tied a bandana around her hair to make it stop bothering the poison ivy. She was sitting on the floor and took it off eventually. Davy looked at her, then the bandana, then her, then the bandana, then ... well, you get the idea! And mom said, "Yes, Davy, it matches your collar!" and he wagged his tail and looked at the bandana. Mom asked if he wanted to wear it and he wagged a LOT, and so she tied it around his neck and he was so HAPPY! He pranced ALL over the room and was so happy and hugged mom and was so HAPPY! I hope Althea's purple bandana makes her that happy! 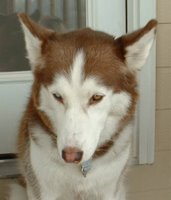 Love, Amber
PS: I owe Opy an apology. I've never met a female black labbydog before and I thought Opy was a boy and used "Mr." (out of respect!) and "handsome" ... and now Mr. Charlie the Big Dog is teasing Opy and I think it's my fault because I now think Opy is a girl. Since I can't do sniffies, I just didn't know..... and I apologize. Roo. I'm pinning my ears back...
Posted by The Army of Four at 7:59 AM