Ha roo, pups! It's me ~ Zim! Yesterday evening, Mom said I was acting kind of "squirrelly". I'm not sure what that means, but even though she'd already taken me out, I tried to zip into the garage and go out again when she was taking the girls out. I wanted out REAL badly! So ... after the girls had their turn, Mom said, "OK, Zim, let's go!" and she took me out again. COOL!

We usually go right from the driveway to go use the yard, but I said, "Hey, Mom, no! Let's go left!"

I was really adamant about it, so she gave in. (She talks tough, but caves easily.) It was there ... the reason I wanted back out ... at the end of our next-door-neighbor's driveway! I froze! 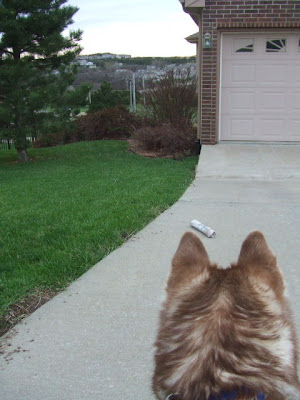 She said it was the neighbor's newspaper. "No, Mom, not that! Look further! At the end of the driveway!" 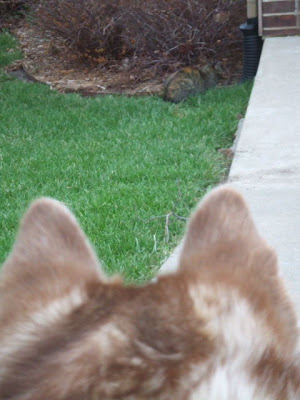 She still couldn't see what I saw. I had to take her closer. That's when she saw him - and he saw us! 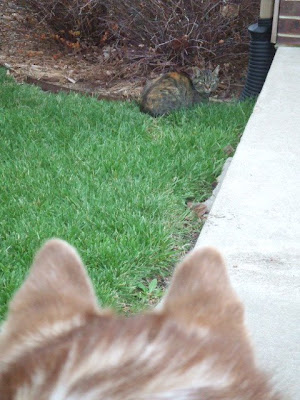 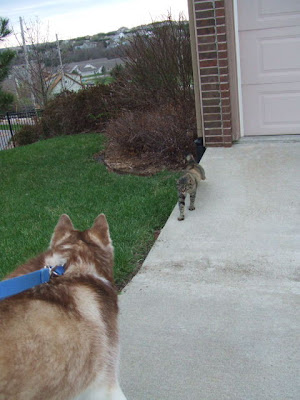 See his feety-feet? They were really cute and he was sort of flexing them. Then he did this cross-legged thing: 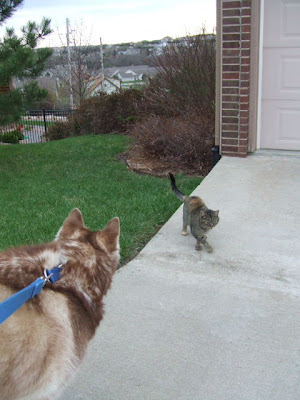 Tia? Does that mean anything in Cat? THEN, he flopped himself down and was rolling all around!

Mom thought maybe I scared him by trying to get too close. I don't know how she comes up with these crazy ideas! Anyroo, she decided we should go home ... only guess who else wanted to come?

Not only is Mom using a REALLY strange tone of voice, but why did she tell my new friend "no"? She's really no fun sometimes.

I hope my new friend is out there again today. I stayed by the side window until it was too dark to see anything last night. I've never seen that kitty before, but I think we have a good start to a friendship!

PS: Wilbur? Any ideas from you on what he was saying with his body language?