Ha roo, pups! It's me - Zim. I exchanged some mighty interesting emails this week with our pal Nikki in Northern Cyprus. She said I could share her news with you. You won't believe how tough her job there has gotten!

In her first email, she told us, "Hey Everysibe! Just thought that I would let you know that on top of all my other duties in protecting the property against marauding cats and vicious dogs I now have to watch out for stray cows!" Stray cows?!?! Holy ... cow. Here's Nikki checking it out! 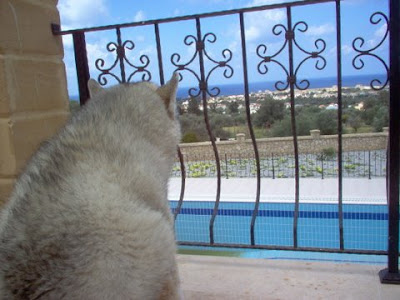 Can you see the cow there, just beyond the wall? (And yes, that's the Mediterranean Sea in the distance ... sigh. I'll bet that's as fun as an ocean.) (Why is Stormy 'ha roo roo rooing' at me?) Anyway, she said the cow looked much bigger in person! It looks plenty big here! Check it out: 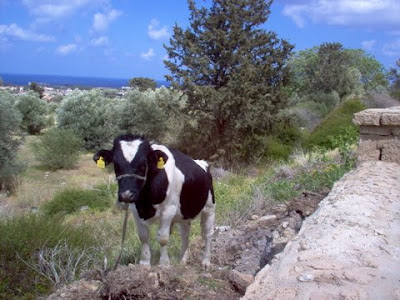 Nikki said it was not the only cow around, "There were lots of them and there was a lady running around with a bucket pulling at their tummies! There was also a little baby one that we saw when we went walkies. I wanted to go and 'check it out' but Mom wouldn't let me - meanie that she is!!!" Yeah, moms are like that, aren't they?

Nikki went on to say, "They make the funniest noise too!! MOOOOOOOO!! I thought it was WOOOOOOO at first and was going to play with them until I saw their size!" Yeah! The Deeve met some cows once and was totally confused by them imitating us Sibes!

That whole "lady with a bucket" thing confused me, so I asked about that. "Wowzers, Niks. Lots of them? Good thing you're on the job, or they could have invaded! I wonder what the lady was doing to their tummies? Tummy rubs, do you think? And a bucket? How odd."

She told me that her mom said something about milk, and added, "but I know that milk comes from cartons!!!" Oh, ha roo roo roo! Nikki's mom is so funny! We ALL know milk comes from cartons - what kind of joke was she trying to pull on Nikki? Then I figured maybe the lady was giving the cows tummy rubs so they'd go to the market for her and buy her some milk. Don't you think?

Nikki said that their perimeter is safe for the moment! Really, Nikki, we are so proud of you and the work you do! You totally deserve that room with the view of the Med. Stay safe, friend, keep your bipeds safe, and don't work too hard! Oh! And beware of moo cows!