Welcome to Part IV of our month full of Sunday Salutes to our great-sisters, Jesse and Lucky! Last week, we shared many of their European adventures with you. They helped Mom and Dad enjoy their three years in Belgium to the fullest!

There came a day when it was time to pack it up and for everyone to head to the States! 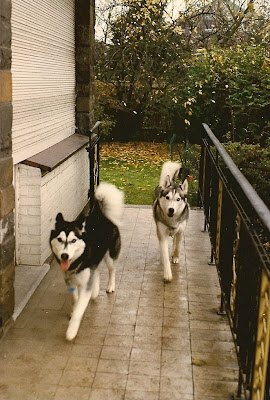 Lucky and Jesse, ready to head to America!
For Mom and Dad, this was coming home. For our great-sisters, the US was a land full of curious things! Their first stop was Virginia. There, they met their fur-cousin, Jackie Blue, learned how to splash in a kiddie pool to beat the heat, and were introduced to closets for the first time. See... in Mom and Dad's house in Belgium, as in many houses in Europe, there were no closets. Every time Mom would go into a closet at first, the girls would follow her, then act surprised - like "They have such small rooms here in America!" Ha roo roo roo!

They also experienced crunchy autumn leaves for the first time (it rains a lot in Belgium) and their first Halloween. Lucky didn't care for all the ringing of the doorbell, then no one coming in to admire her, but Jesse thought it was a blast. Mom let her help hand out the candy!

When they lived at Ft. Leavenworth, Kansas, Jesse and Lucky were delighted to see there were a lot of children in the neighborhood. One little girl in particular would stop by almost daily to see if they could come out to play. Here they are with her, playing "Button Button". 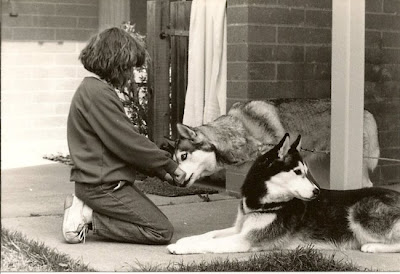 It's in ... wait a minute ... not that one ...
It's a game where the biped "hides" a treat in one fist, then presents both fists to the Sibes. The pup then taps whichever hand the treat is in. Jesse really excelled at "Button Button". In the photo above, Jesse was playing, while Lucky patiently waited her turn - while checking out the rest of the neighborhood!

The girls were fed in the kitchen, but Jesse was used to dining in some of the best restaurants in Europe, so she would somehow bring her bowl into the dining room. Mom has no idea how she did it. Here she is, saying grace before eating. 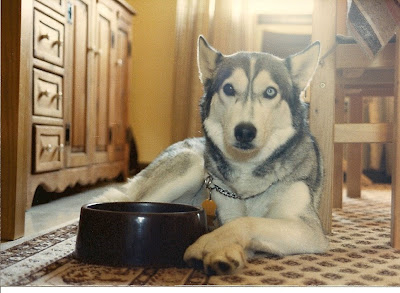 They still went on cool trips in the States. Here they are with Dad in Parkville, Missouri. 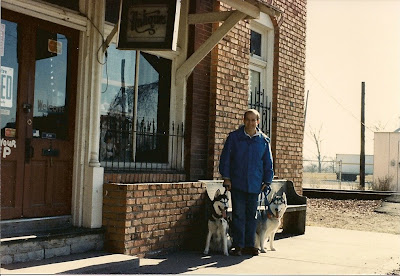 I wonder if they knew Missouri would be the future home of our future president, Tubey! Maybe not. Parkville is actually closer to where the D'Azul Siberians live anyway.

They moved with Mom and Dad again, not too far from the current Ao4 HQs, when Dad got his first assignment to Fort Riley. While there, they made friends with Sam, a really cool guy who was Mom's friend's pup. He did a lot of sleep-overs with them and they had tons of fun. Here they are at Christmas of '87. 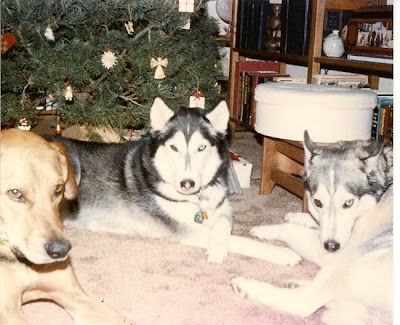 Oh, we know what SOME of you might be thinking. "Caught looking at Christmas presents", right? No. Not them. Look at how INNOCENT they look! Really! We're sure they weren't peeking at ALL.

When Sam's mom (who is Rocky and Mati's dad's cousin, by the way!) adopted him from the shelter, she was told he was a "beagle mix". It wasn't until she saw him towering over our great-sisters that she realized Sam-the-70-pound-Beagle might just have a little something else in him, too. Ha roo roo roo!

It was during a Sam Sleep-Over in July of '88 that something REALLY cool happened! Mom and Dad were adopted by great-brother Booter! Here they all are on his first day home! 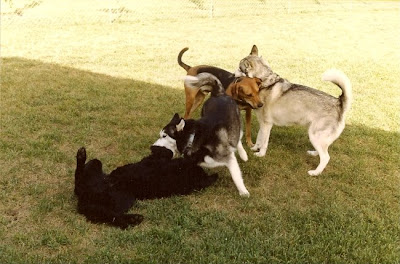 They played and played in the back yard together; it looks like a blast, doesn't it? Then Booter and Sam played fetch with Mom for a long time. The girls were fascinated with this, as they believed in the Siberian philosophy of "you threw it, you go get it". Booter loved the game, though, and would even bring the Frisbee or ball to them thinking they might throw it for him! 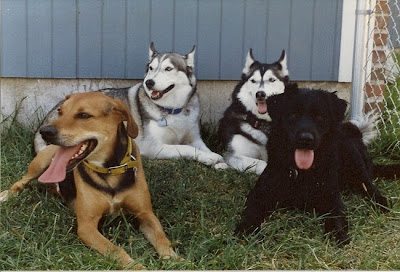 Sam and Booter in front; Jesse and Lucky in the back.

Lucky and Jesse taught Boots a lot about the ways of the Siberian, and he, in turn, regaled us girls (Storm and Ammy) with all their tales. Here are Lucky and Boots on his first day in the family; you can see Lucky is praising him! 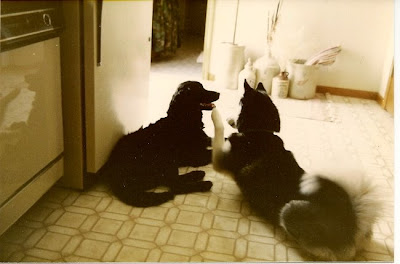 Good Booter! Obey me and I will teach you the ways of the Siberian!

Remember a long time ago, Storm shared a picture of her first day home - with great-brother Booter!

Lucky and Jesse went on to have many, many more adventures with Mom, Dad and Booter. As this is a celebration of their life, we will end our Salute to Jesse and Lucky right here. They were, indeed, and always will be - GREAT sisters!