Ha roo, pups! Storms here. Lots to tell you about, so I'm going to get right down to business! The title of the post was hard not to play with; Amber wanted it to be "Prince Trips Overboard", but I think you all know Ammy. Ha roo roo roo!
First up - have you seen Team Husky's blog lately!?!? That handsome, strong, fast Siberboy Prince has asked me to be his girlfriend - in the most creative way! Make sure you stop by and give his latest post a read. My answer, of course, is YES! What a pup! I am so flattered!
Next up - did you see Tucker's blog yesterday? His Human Assistant offered to give a 13-year-old Sibe named Sinjin a new home, rather than be put down. It's a long story we won't go into here, but a big tail wag to Tucker's H.A. for offering to take him in. He just needed a little help with transport - which is where our dad came in! Our dad headed west yesterday, picked up Sinjin out in Salina, then headed off to meet up with Tucker and his H.A..
On the following map, Dad started at point B, on the far right. Tucker and his HA were in Denver - point A on the far left. They met in Burlington, Colorado, which is point C.

Tucker posted some pictures of the meet-up in Burlington on his blog; here are a couple our dad took!

Here's Tucker. Ammy thought he looked cute here. It was nice of him to make the trip with his H.A.! 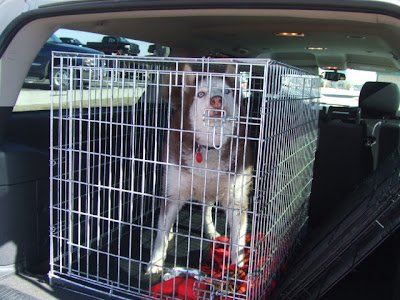 Here are the boys meeting for the first time. 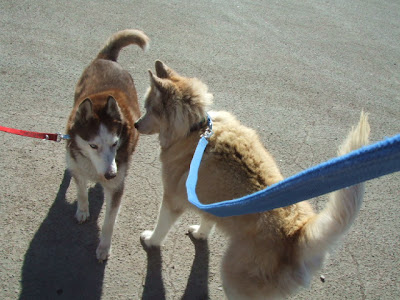 And here is Sinjin after Dad turned him over to Tucker's H.A. 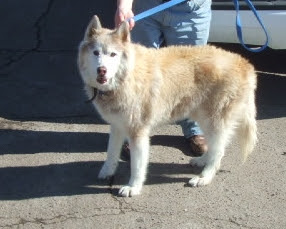 We wish Sinjin a most happy new beginning in his life - and say a big thank roo to Tucker's H.A. for taking him in. AND a big Ao4 thank roo to our dad for all the miles and work he put in yesterday!!!

Lastly, this is for Summit the Super Mal. Summi is rather famous for his love for "livergreat" -- his word for liverwurst. We saw this cartoon this morning, and Summi immediately came to mind.

Ha roo roo roo! That Louie has one great snooter on him to find that pill. Hey, Summi! You don't think your mom hides stuff in your livergreat, do you?