This week, our Sunday Salute goes out to our very own fur-cousins, Monroe, Newton and Skyler! Here they are!

These guys live with our Aunt Janet - you've heard us mention her quite a few times! Yes, she's the Master Gardener who sent Zim the Magic Beans and sent us the flag for Ao4 Headquarters! We thought we should tell you about our fur-cousins now! The group pictures are a couple years old, but currently Monroe is 14, Skyler is 4 and Newton is 5. Here's another very sweet picture of them! 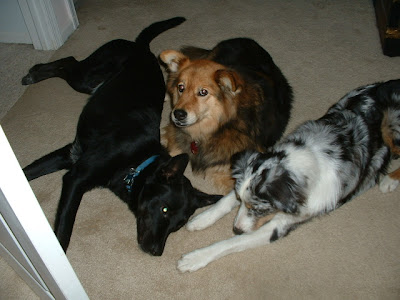 Don't they look sweet and charming? But sometimes, after our fur-cousins have been out playing in the back yard, Aunt Janet hesitates before letting them into the house. How could she do that!?!? Look at these sweet, innocent faces! 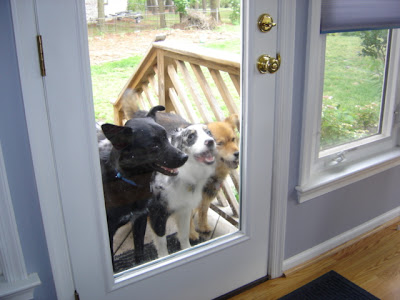 Let us in, please!

Why the hesitation? See... apparently Skyler - who Aunt Janet adopted when he was 8 months old - has a bit of ... excess energy, shall we say? Mom has suggested that if Aunt Janet would only get Sky, a young Australian Shepherd, his own flock of sheep to herd, he could work off that energy. As it stands now, he finds his own entertainment. 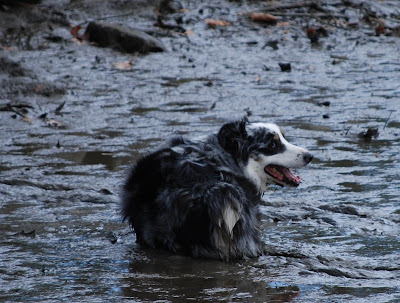 Have we mentioned there's a canal that runs past Aunt Janet's house? 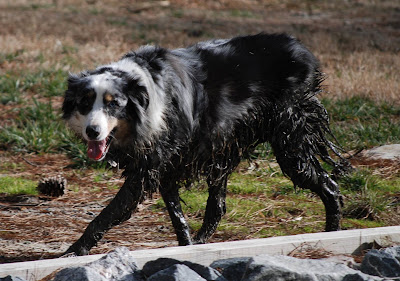 A canal that's very muddy when the tide is out?

Ha roo roo roo! A big paws up to cousin Skyler for keeping Aunt Janet on her toes! He's real helpful with the gardening, too - maybe he's the Master Gardener, not Aunt Janet! He's always digging stuff up and transplanting it!

Fur-cousins Monroe, Newton and perhaps especially Skyler - for all you do, we salute you!