This week, our Sunday Salute goes out to Dogs With Blogs (DWB)! We've saluted this incredible organization before, but wanted to tell you more about how it all started and see what's new in the works! Do you realize DWB is over 800 bloggers strong now?!? Ha rooo!

Stormy recently interviewed Greg, Opy and Charlie's dad and co-founder of DWB. Here are excerpts from that interview!

SZK: Thanks for agreeing to this interview! I know you're a busy guy - between work, all the volunteer activities you're involved with, and the really important things like giving Charlie and Opy hamburgers and all! I'd really like our readers to know more about the heart, the origins of Dogs With Blogs! How did it all start?

DWB: Dogs With Blogs was an idea that I was never initially able to fully realize. I volunteered to build a website for a doggie rescue organisation in Queensland Australia, and had planned to use the "dog blog" idea to draw attention to the cause. Ironically, I was literally fifteen minutes too late in my offer. Someone else got in before me. I felt the idea was too good to waste, and started thinking about how I could make the idea stand alone.

SZK: AH! Doggie rescue! We love that, you know! All of us are former pound puppies except for Amber; she was a "late adoptee" off a farm! We love helping rescue groups! Was there one special event or pup who inspired you?

DWB: Yes! I used to own a retail outlet, which had its fair share of "strays" wander through the parking lot. One day, a Blue Cattle Dog took refuge on our doorstep. She was the most beautiful puppy I had ever seen. She was so sweet, and we came to calling her Marny. We knew if we didn't act, Marny would have been run over by a passing car, as our store was located on a very busy major roadway.

SZK: Oh, no! Poor little Marny! What did you do?

DWB: We took her to the local Animal Shelter who informed us that if Marny wasn't claimed in 7 days, she would be put to sleep. We were shocked and astounded, we could not believe it.We were on the phone day and night and at the 11th hour, we found a friend of a friend of a friend, who was a carpenter, and he was ecstatic to learn that his life could be blessed with the companionship of this beautiful puppy, Marny.

SZK: YEA! I'd sure like to lick that guy's nose! Yours, too, come to think of it! So what became of Marny?

DWB: We paid $110 to have Marny released from the shelter we left her at seven days prior, and drove her to meet her new human. They hit it off instantly. The last we heard, Marny had taken to the building site like a duck to water. Sleeping on the end of her new daddy's bed each night, it was so rewarding for us to know we had saved her from certain death.

SZK: What a special puppy - and what a special thing you did for her. We canines never forget kindness, you know! How did this lead you into launching DWB?

DWB: That was just one dog. There are hundreds, maybe thousands of beautiful pups, with hearts full of love, that are put to sleep everyday. Both Brooke and I cried many tears after learning this. Like a bolt of lightning from above, our urge to do something to help dogs on death row, and the "dog blog" idea came together. Dogs With Blogs was born. 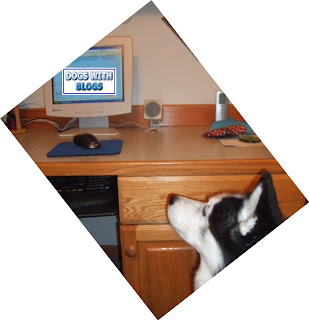 SZK: That is so special! It's a great blogging community!

DWB: Right! Some two years later, Dogs With Blogs is easily the best online community on the planet. We now have over 800 members from all walks of life blogging harmoniously together, with no controversy or conflict. Dogs With Blogs is truly a case study in Social Science. It defies the patterns seen in all other public gatherings. We are all united by one common cause which completely negates all of the other issue's which under normal circumstances, would divide us. We all LOVE our dogs, flat out, no questions asked.

SZK: And us pups love you guys! Tell me more about how DWB helps doggie rescue! Like helping Monika's Doggie Rescue! That's such an important aspect of the organization - though sometimes, sadly, that gets a bit "lost", if you know what I mean!

DWB: Yes! Even though we have created this clearly remarkable online community, it has only generated $500US in two years, chiefly through the sale of our annual calendar. As great as Dogs With Blogs is, it has not been able to generate the support we had hoped it would, to help save the lifes of the hundreds of other doggies like Marny... Hopefully, the re-Incarnation of the Dogs With Blogs' online store will change that.

SZK: A new on-line store with really cool stuff, right? I've taken a peek and plan to order some things for our mom and dad! You're using artwork and images donated by DWB members! Everything is so cool! We love the items you made with the Ao4 logo on them! Thanks so much for doing that!

DWB: We hope [that will] generate sales and create interest in what Dogs With Blogs was originally designed to do. We realise that there is so much work to be done locally, and it's hard for people to support a dog rescue charity in Australia, but believe me, there is nothing we would like more than for Dogs With Blogs to be supporting many doggie rescue organsiations all around the world.
The biggest journey starts with the smallest step, and we are hoping that the new and improved online store will start a worldwide journey that enables Dogs With Blogs to save the lifes of thousands of dogs all around the world.

SZK: What an outstanding goal - we are so honored to be a part of the Dogs With Blogs communtiy.
Thanks so much for the interview, Greg. And a HUGE thanks to both you and Brooke for starting this remarkable Dogs With Blogs organization! We salute you!

I'm going to do my part to help raise money for rescue right NOW! Now ... where is Mom's plastic card ....?

On behalf of the Army of Four,
Storms