Ha roo, pups. It's Zim again. Thanks for the comments on yesterday's post. I would like to comment back on my buddy Steve's remark (I'll quote him in a sec!) and to Holly's. Oh! And thanks to all who admired my doga pose by the window. Where I was the WHOLE time. RIGHT there by the window..... doing doga. Yep. That's it.

Anyroo, Holly said she didn't think we were allowed on the FURniture. We aren't Holly! (Except for the bed.) That's why I was over by the window doing doga the whole time.

Steve's remark about the alleged red and white Sibe hairs allegedly found on the sitzbank was, "I bet those were Ammy's hairs." Brilliant, Steve! Brilliant! I think you're on to something!

I talked to Dave about this, since he was there on the scene. I got him to sign the following afi-david:

I, Dave, cannot say for certain that any Sibe hairs that may have been found on
the sitzbank belong to Zim, my very favorite brother and playmate. I would add
that Mom cannot be counted on to identify them, as she is color blind. Zim's
coat is more brownish and white, while a certain other member of the family's
coat is red and white. Not meaning to point the paw at anyone. Besides, I was
staring out the window at the dogs in our yard the whole time and didn't see
anything behind me. Respectfully submitted - Dave

I asked Stormy for some advice. She pointed out that try as I might to deem myself innocent, there was a question of some photographic evidence on yesterday's posting. Which gave me an idea. 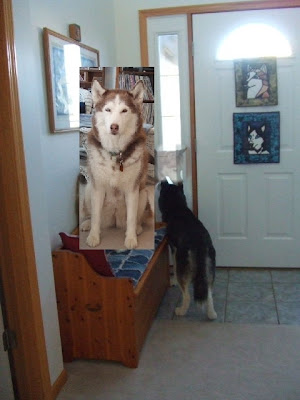 This photo is totally undoctored. Really.
Run it through Snopes - it is not listed there as a hoax, so it must be real.

Steve - you were right! It was Ammy! And Holly - you were right, too. We aren't allowed on the FURniture, so it most certainly couldn't have been my Sibe fluff up there! Ha roo roo roo!