Ha roo, pups! It's me - Stormy! Have you seen our friend Charlie the Big Dog's blog lately? Not only did he post pictures of himself doing the Hail Me pose (Hail Storm/y) but he's written us a Haik-woo!!! Yeah! Isn't that wonderful?!!? He's taken Dave's art form to new heights and has honored us with a Haik-woo about all of us! Here it is! 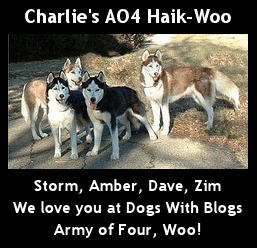 We are totally impressed, touched and honored. Dave says it's outstanding and is flattered that Charlie is trying his paw at writing Haik-woo; Zim thinks it's totally cool; and Amber says that we must do something to show Charlie how deeply we cherish this Haik-woo and his friendship. The choice seems clear to me - and I think it was Holly who inspired it with a comment to Charlie. She said he could be "a Siberian in Lab fur, just like Dave is always confused with being a LAB in Siberian fur!!" Exactly. Only there's no confusion -- Dave IS a Lab in a Sibe suit. Ha roo roo roo! (Just kidding, Dave.)

So... by the powers vested in me as the Supreme Commander of the Army of Four and the Dean of the Stormy Zoluschka Kryschtal School of Siberian Studies ... I hereby declare Charlie the Big Dog to be an honorary Siberian Husky! Dave has marked the occasion (not that kind of marking!) by writing a Haik-woo of his own: 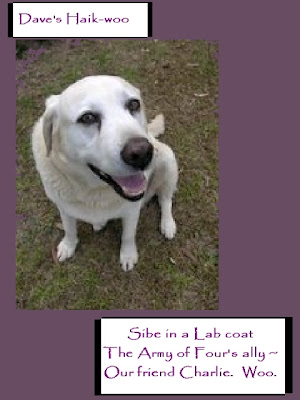 Also, from this day forward, Charlie is an auxiliary member of the Army of Four!