Woooooooooooo! It's me - Dave. Here I am, saying, "Woooooo!" 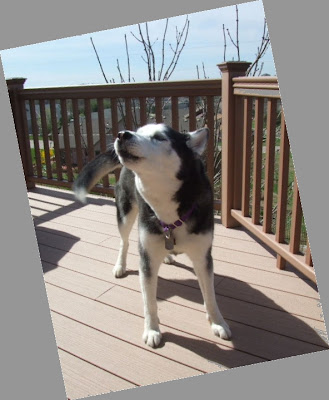 Wooooooooo!
That picture actually has nothing to do with what I was going to post today, but Mom took it a week or so ago and thought it was cute. I thought maybe Holly would like to see it.

The tie-in is that I read a couple emails Holly's mom and my mom sent each other the other day and they seemed to be highly amused by something I did after I first got here. Storm said I should go ahead and post it, partly because she thinks it's funny and partly because she said we're in "peril" (I thought we were in Kansas!) of losing our HULA membership and that Meeshka thinks we're goody 4 pawses. I said we should just say, "Are NOT!" but Storm said this story would do the Ao4 proud. I don't HAVE to do what Stormy says... but I will in this case. And, um ... I usually do.

It all happened shortly after I got here. Remember, I was probably 4 years old at the time and really a pretty good guy. My dad was at work, and Mom was taking us on morning walks. She took me and Stormy first - woo. We had a nice time and then got home and mom asked, "Will you two be OK while I walk Am and Zim?" Stormy gave her "the look" - you know, like "Why wouldn't I be OK? Don't you trust me?" and I gave Mom my "Yes, Mom" look.

Mom took Am and Zimmie on their walk. And I think it was a long walk, 'cuz I remember getting pretty snack-y while they were gone. So ... well ... I decided to get my own snack. That's simple enough, right?

When Mom and the redheads came back, me and Storm were nice and quiet. Storm was by the stove napping like she likes to do. Mom looked around and saw me in the doorway between the kitchen and living room. As she told Holly's mom, there I was "with what remained of the bunch of bananas that had been on TOP of the fridge!" (I think she means the magic cold box. And yes, they were on TOP of it. Were.) We all know bananas are an approved snack for us, so I was just being helpful! I gave her a friendly greeting, "Hi Mom! How was your walk with the redheads? I got my own snack, OK?" I don't know what the big deal was.

Later that day, Mom had to talk to the vet about something else and said, "So... while I have you ... hypothetically, if someone took a bunch of bananas off the top of the fridge and ate probably 2 or more of them... peel and all? You know... hypothetically ... would that be OK?" The vet told Mom, "Hahahahahahaha! Which one of them was it? Hahahahahahaha!" or something like that. And there were a few "How in the WORLD?"s thrown in there. The vet assured Mom I'd be OK but that she should keep an eye on me. Mom thought that was a good idea, bananas or not. I don't know what that means. Besides, it helped firm up the loose stools I'd had since I got out of the slammer.

Mom and the vet wondered if maybe I was getting too much Cosequin DS and that my back legs were turning into springs! I think they were just teasing. I like to sproing, sproing, sproing especially at supper-dupper time. I just don't see what the problem is with me getting my own snack. Woo.