Ha roo, pups! It's me - Zim! How's everypup doing? You know, after the bipeds have dinner, there's nothing I like better than to do zoomies around the living room with Dave for a while then to settle in to watch some TV. How about you? Do you pups like TV?

One of my favorite shows is COPS. The theme song is pretty cool and is great to sing during a zoomies session with Dave - but what I really like is when a K9 cop is involved in bringing down the bad guy! Here I am, watching an episode with a police puppy involved! 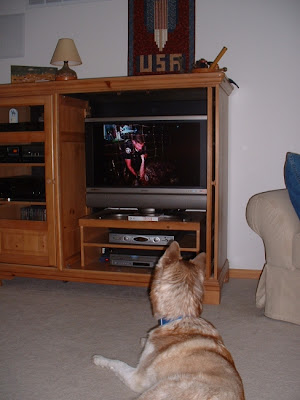 I could hear him yelling at the bad guy! It was so cool! And very realistic! I thought he was right inside our TV cabinet! 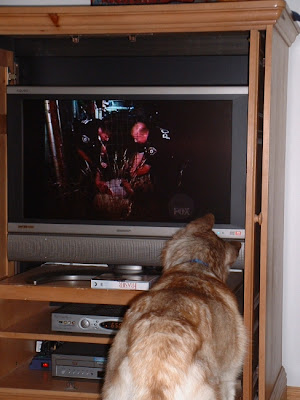 Pretty cool, huh? I've also got a favorite commercial out there. No ... not the one where the guy calls his dog "Mr. Barky von Schnauzer" - though for some reason, that always cracks my mom up. My favorite commercial is the one below, for Jeep. It has a "wolf" in it. But we think up until they show him snarling, it's the most Siberian-looking "wolf" we've ever seen. Stormy thinks it IS a Siberian and they had to teach him how to make the growly-face. He's just acting! Here it is:

What do you all think - a wolf or a Sibe pretending to be a wolf? Maybe a Malamute at most ...