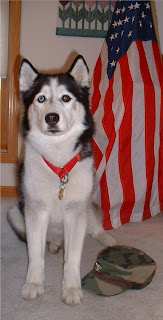 Join the pups who've joined the Army. Of Four.

Everypup who has contacted me about joining the Ao4 should be in this list...

... and you are now to be considered a Trooper in the Army of Four. (Don't get hung up on the number - it's a moniker type of thing.) Being a Trooper in the Ao4 means we all cover each other's six, stick together in case of trouble, be supportive of each other, and teach each other cool stuff, as I explained the other day. I hope we'll also share stories of the adventures we encounter while out on our missions! (More to come on those!)

Yes, we have a couple members already who are not exactly dogs ... oh, like for instance Fu Fu and Tia ... but I will not turn away a sincere recruit! I half expect to hear that Kyzer's friend Fox will want to join, too - and if he volunteers, I will not turn him away! We welcome all - as long as your desire to join up is made in earnest. And Joey - if Tanner would like to join on his own volition, have him contact me!

I'm putting the finishing touches on a cool animated gif file for you to post on your blogs; I'll have that up in a couple days. Carry on, troops! We are ARMY STRONG!