This week, our Sunday Salute goes out to our friend Nikki of South Africa! Yes! You know Nikki! We've featured her a few times before! In fact, remember in March we posted about her having to have a ... b-a-t-h? She said it was because she was going on holiday with her bipeds! We had a great email from her a few weeks ago and we've been waiting for JUST the right time to share her adventure with you!

In her email, she said, "Hey Everysibe!! 'Member a few weeks ago I was tortured by my Mom and Dad and they gave me that dreaded bath because they were taking me on holiday!? Well we went and we came home and we had a good time!!!"

She initially was very worried when she saw suitcases and boxes coming out of cupboards, so she carefully watched every move. As she said, "You never know with these humes, the last time this happened, McKinley and I were sent to prison (what humes call kennels) for 10 days so I was very worried. Mom kept saying 'Don't worry Niks, you are coming with', but I wasn't sure what was happening."

Nikki's bipeds packed up the car and her mom put a lovely quilt she made on the back seat. (We've seen this quilt - it's a Woodland Clover and is STUNNING! Beautiful enough for a pup!) "Anyway she put this quilt on the back seat and I got in and off we went. I still was not sure where I was going as I sometimes go and visit my boyfriend Sasha (he's very handsome - we've seen pix of him!) and that is an hour's journey. We drove and we drove and we drove and I started to relax as I knew we were past the 'prison' so I wasn't going to jail!"

Their first stop was a place called Belfast - not the one in Ireland but one near where she lives, in South Africa! Nikki told us that when her Mom was a biped puppy, she used to live there! Here is a picture of Nikki's mom, her grandma and her dog Jock; it was taken at the dam there. (Her pup was named after Jock of the Bushveld, one of her favourite books when she was little.) 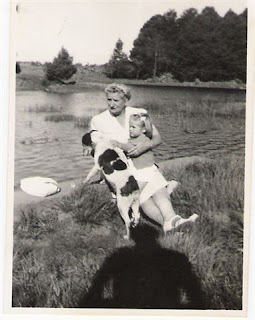 And here is Nikki and her mom in the same place now! 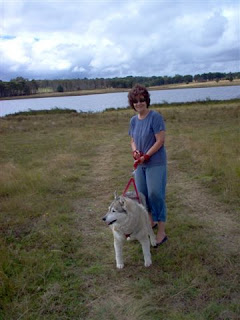 Nikki and her mom at the Belfast Dam!

"Our next stop was a very busy place where we had to feed the car," Nikki continued. "Mom walked around with me; I needed to stretch my legs and quite a few people were totally overcome by my beauty (naturally!) and had to give me tickles and I kissed them in return! Some people thought I was a wolf!! Now I ask you ...what would a wolf be doing in the middle of Africa???" Woo.

We eventually got to our new sleeping place and I was delighted to make friends. 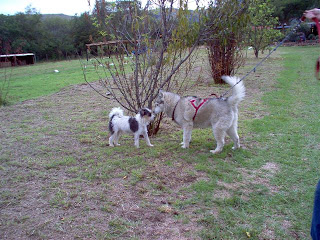 Nikki and a new little friend

After they unpacked, they went for a walk. Nikki told us, "Mom and Dad had to refresh themselves after the walk and we went to 'The Pub'. Once again I was much admired. The lady that lives there had a Husky called Nikita but because it is a farm and she ate the neighbours chickens and also because there was no fence she went to live in the big city of Johannesburg. I got special treatment because I was so like the other Nikita and was allowed to sit in the door way of 'The Pub'. The lady said people could just walk around me! Very fitting for someone of my breeding and beauty!" We hope they also bought you beverages and a snack, Nikki! 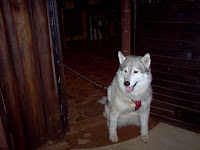 Nikki at "The Pub"

The next day brought even more adventures! Nikki and the bipeds drove for quite a long time and eventually came to a little village with pretty little cottages. While there, they saw wild horsies! 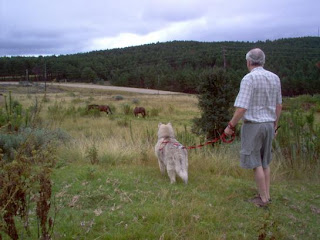 Nikki continued to tell us about her adventure, "When we got back to our new house my Dad went to do some fishing. I sat and watched him; silly biped, does he really think that the fish are so stupid that they are going to get themselves hooked on a line? We had steak for supper that night (yum)!!" Glad the fishies were smart enough to avoid being caught, since it meant steak for you! Ha roo! (Amber said she's heard fish spend a lot of time in school. Hee hee hee.) 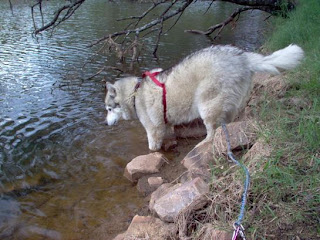 Go away, fishies! I could get a steak out of this deal!

Nikki's holiday was almost over. "Next day our big adventure was over and we drove home, we stopped at a few more places, a big dark tunnel that was quite scary but I was very brave and protected my humes from any danger." Wow! Very brave, indeed! Nikki sent play bows and said that if we come see her, she'll take us on a big adventure since she's such a well-travelled lady now!!! Let's ALL go!

Nikki, for taking your bipeds on such a cool holiday adventure, making new friends, snagging a steak dinner, protecting your bipeds in the tunnel and so very much more ... we salute you!