It is Memorial Day here in the United States today. Celebrated on the fourth Monday in May, we set aside this day to honor our fallen service members. Originally, this was a day on which flags and flowers were placed on the graves of soldiers who died in the American Civil War; today we remember all service members who have made the ultimate sacrifice. 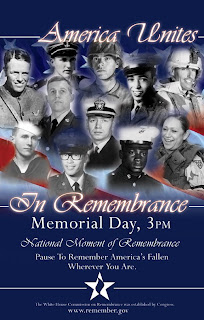 In President Bush's Prayer for Peace, the proclamation he issued for this Memorial Day, he says in part, "...When it has mattered most, patriots from every corner of our Nation have taken up arms to uphold the ideals that make our country a beacon of hope and freedom for the entire world. By answering the call of duty with valor and unrelenting determination, they have set a standard of courage and idealism that inspires us all..."
We are truly inspired by these patriots and will never forget the sacrifices they have made for us. We will spend time today to honor our fallen American Soldiers, Sailors, Airmen, Marines and Coastguardsmen. In the words of the late General George S. Patton, "It is foolish and wrong to mourn the men who died. Rather we should thank God that such men lived."
We will leave you with the lyrics to a song we found on The White House Commission on Remembrance website, On This Day, by Charles Strouse. (Please click here to listen!)

The bugle has sounded
Its notes drift away.
This time now belongs to you….
Verse:
On this day for one brief moment
Hear the silence fill the air.
Think of those, who walked beside us;
Now no longer there.
Then, don’t cry, but hear their laughter
For their spirit lives inside,
Let the mystic stream of mem’ry
Fill our hearts with pride!
Make us humble,
Make us knowing,
And reflect on what is done…
On this day
For now, forever
Make this nation one!
On this day,
For all the fallen,
Make this nation one!