Ha roo, pupper-dupper-doos! It's Stormy! Are you ready for Part II of our Giant Walk? When I left you yesterday, I told you we sent Mom and Dad a Siberian Mind-Meld Message that we wanted to go explore the area where the Giant has been busy with his Tonka Toys and everything over the summer. (For new readers, we've been tracking the Giant's moves for a long, long time now. You can click on that hyperlink to catch up!) Sure enough, Saturday morning, Dad said, "Let's go!" and we headed into the Land of the Giant!
We made a wide loop around and into the area we showed you yesterday, instead of heading right over that cliff. Mom said we couldn't go on one of the little trails - something about not having had a hard freeze ... and ticks & fleas. Hmm. OK with us - it just made for a longer walk!
Here's the view heading into that valley from the new road! 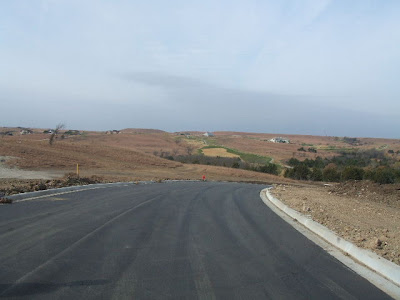 Cool, isn't it? We boldly went where no Siberians have gone before!
The road meandered around, then flattened out where Little Kitten Creek (I know... I know ... who names these things!?!?) sort of ends or fizzles out. Rumor has it they're going to dam it up and create a cool water feature there! The road sort of fizzled out there, too, then started up again. Here are Amber, Dad and Zim after they crossed that area. 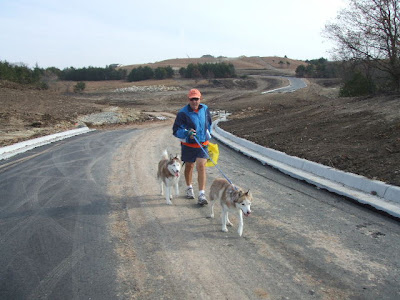 Amber had just done one of her "behind the back" maneuvers. She learned that from great-brother Booter; it's a herding thing. It's her way of paying homage to him.

We walked a long time, then we came to another side road. Dad said it goes up to a new office building and did we want to go up there or just keep going straight? We opted to go up - of course! Here's Am, heading up the hill. 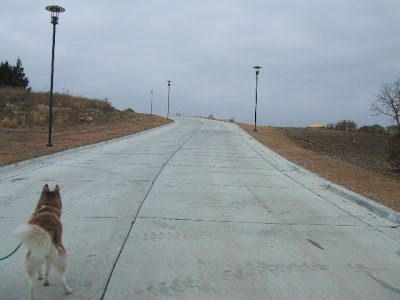 Anyone who thinks Kansas is flat needs to look at these pictures! Amber was worried that the road just went up and up and up and went into the sky ... but she was brave and kept going. Pretty soon, we all had the office building in our sights! 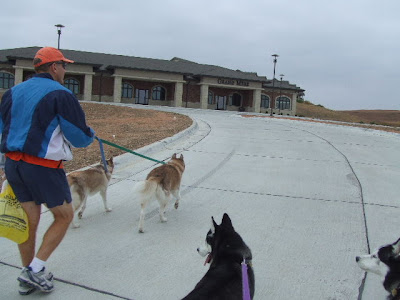 Dad, Zim, Am, Dave and me, heading to the office building

Dave went over to the edge of the parking lot (or is that a "barking lot", Marvin?) and said, "Hey. I think we've been here before." 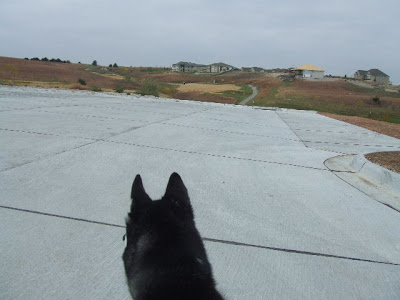 Here's a closer look at what he saw. 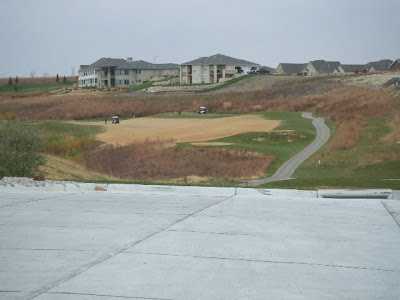 It was incredible! I remembered being there, too - it wasn't just Dave having déjà vu ! Click this link for a post we made almost a year ago! We were there before this was built! Cool!

Then we headed to the other end of the barking lot (ha roo roo rooo!) and had a great panoramic view facing east. We saw part of the castle from above ... AND we saw our house! 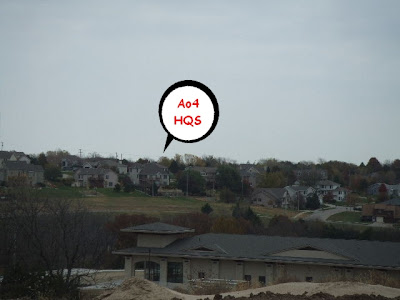 That's the far end of the castle from what we showed you last time. It has three different turrets on it - cool, huh? Dad said we were going down there next! It was totally exciting!

This was our approach. If you look out in the distance, you can sort of see the big road by those pine trees. That's where we took that first picture of the castle that we showed you the other day. You can see the other short turret ... 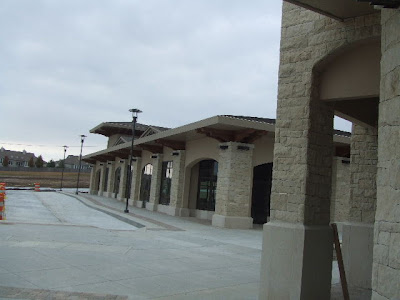 ...and then LOOK! Here we all are at the BIG turret! 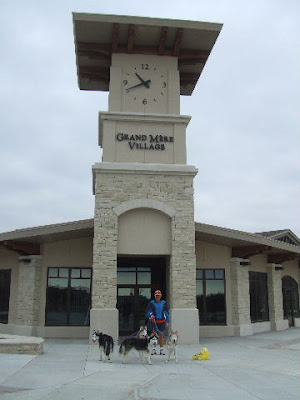 Here's another shot, since somepuppy wasn't facing the right way. He has a habit of marching to his own beat. Sigh. 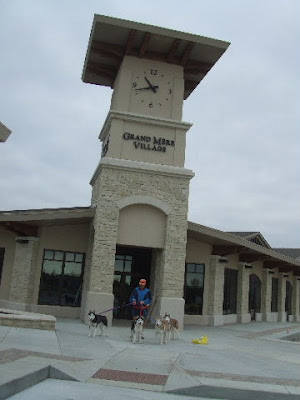 After we posed for a few pictures, we headed home.

Here are Dave and me, going down the home stretch. See the horizon, out beyond those houses? That's where we had been. All we have to do now is turn left on our street, and we're good to go. 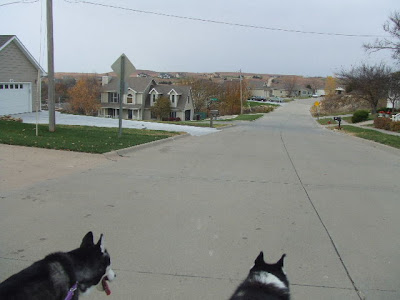 Dave was a bit tired, as you can see. Our big loop route was probably 4 miles or so. It was great fun. It was all we could do to have a short Zoomie session when we got home, then settle in for naps.

Even though he was tired, Dave wanted to check the TV. Something about KU playing Nebraska in football ... in Nebraska. I think he was looking for Holly! 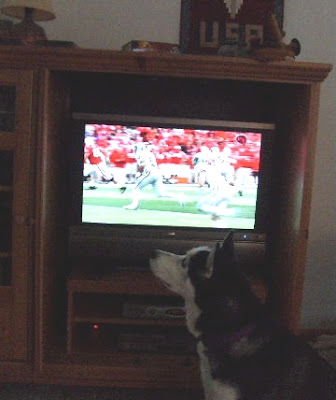 Holly? Are you there?

He didn't see her, so he took a nap, too. She must not have gone to the game.

Hope you enjoyed our Giant Walk as much as we did!