Ha roo, pups and kit-kats! It's me - Zimmie! I've got to jump right into this - it's so exciting! Remember the box Dave showed you yesterday!?!? Guess who was in it!?!? 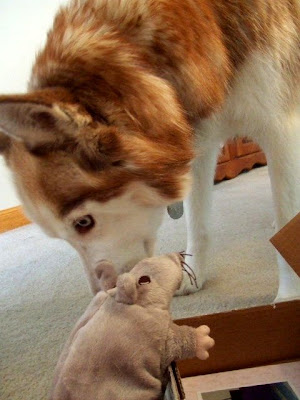 ROGER?!?! Is that YOU!?!?
ZIMMIE!
Can you believe it!?!? Huffle Mawson, my best friend, sent her pal Roger over here! 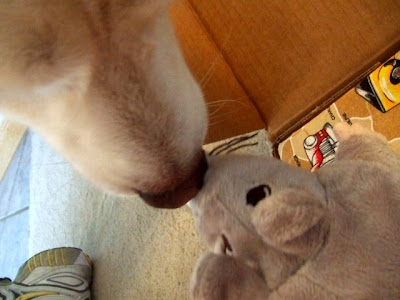 I can't believe you're here!

I had to stick my snooter into his soft fluff and give him a good sniff: 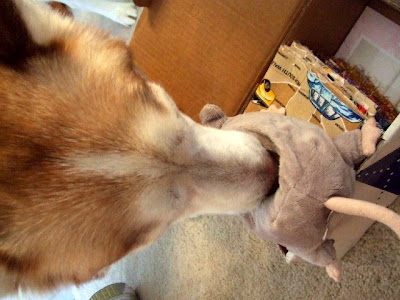 I just knew that's what Huffle would smell like! Oh, and check this out: 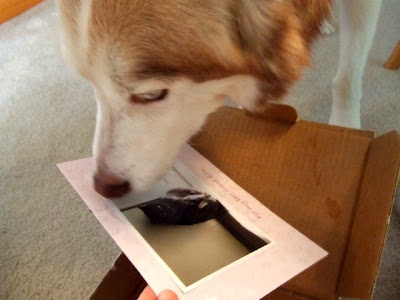 Huffs sent me a gorgeous card with her picture on it! The front reads, "For my best friend Zim" then there's all kinds of cool stuff on the inside. She also said to try not to chew Roger up on the first day. Chew him up!?!? No way! He's my buddy! Even Ammy likes him! She was reading the card Huffle sent to her, Storms and Davy and she let Roger join her! 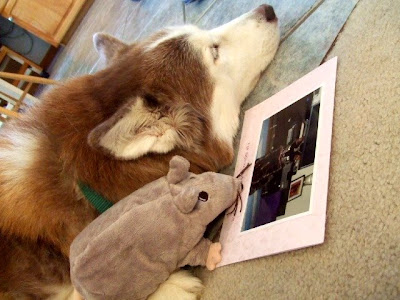 Ever since Huffle told Am that if she was a Sibe, she'd want to look just like her, Ammy's decided Huff is really special. She said she won't hurt Roger since Huffle sent him!

In fact, Saturday there was a full moon, and Ammy and Roger started clowning around together. Look at those two! 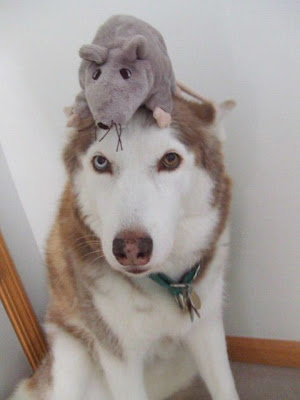 Has to be the full moon, don't you think?

Anyroo, as you may have read on Huffle's blog, she sent Roger here on a secret mission. Or maybe coming here IS his secret mission. I wasn't sure, because it was ... secret. I thought Rog and I had a moment alone, so I started to ask him about it. Mom came in, so we had to clam up. 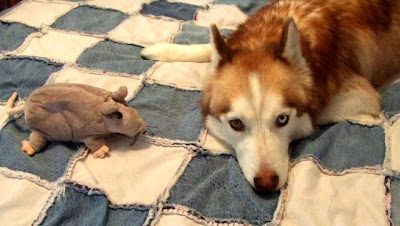 Who, us? We weren't doing anything. Really.

It's like she doesn't trust me or something. I told Roger to do his best "innocent" pose. Don't we look TOTALLY innocent? 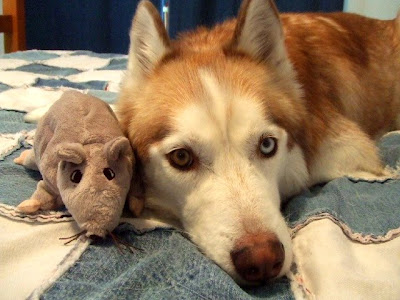 The picture of innocence

Mom forgot all about what we may or may not have been up to and took our picture. She can't resist my cute poses. Storm came in and reminded me that Roger had had a very long trip from Australia, and needed some rest. Good point, Storms. She took Roger to her favorite napping place in the kitchen. 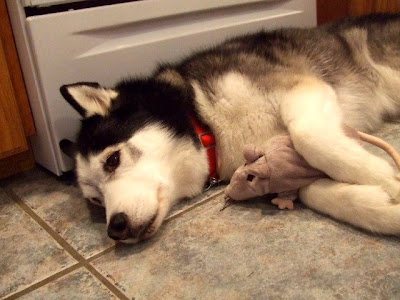 Just stay here for a while, Roger. No one will bother you if you're with me.

She made sure he got some good sleep!

So, Huffs - thanks for sending Roger to us! We're taking really, really good care of him. I'll post more pix of him tomorrow. We've already done a lot of cool stuff together! If only YOU were here, too!