Today's Sunday Salute goes to our pal McKinley of South Africa!
We've mentioned "Big M little c" before - with his sister Nikki! In fact, our second Sunday Salute went to the two of them for (among other things) their great hole-digging skills! McKinley has sent in a couple updates on this one great hole he's got going on; here he is in a great action shot! 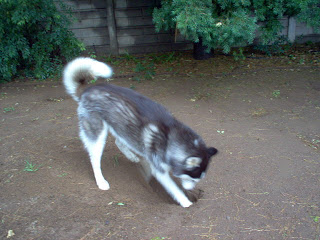 Look at him GO! McKinley told us that he's checking the depth in this shot: 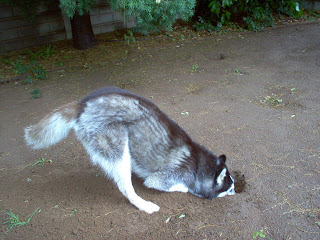 "If you blow in it, it helps dislodge some of the soil and you get a lot further a lot faster!!!"
He's got this down to a science! 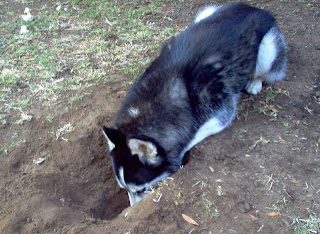 And look at how GREAT his hole is! Wow! McKinley - OUTSTANDING JOB!

As if this wasn't enough of a reason to be featured in our Sunday Salute, McKinley read our posts about the "Sibes aren't allowed on the furniture" rule. Apparently, that very rule is in place in South Africa, too. :( But he has a GREAT way to cope with it and shared his method with us.

He told us, "...my stoopid hume has the same rule - beds only, well that is better than nothing but when I do want to sit on the sofa I do what they call a 'side bum'. This is legal! I promise. As long as at least two 'points' are on the floor I am allowed 'side bum'. Sending a picture (or two) to show you how it is done..." 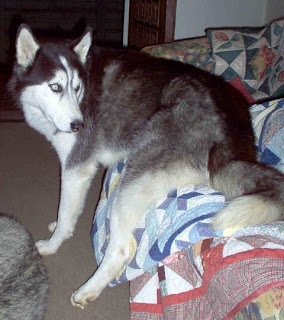 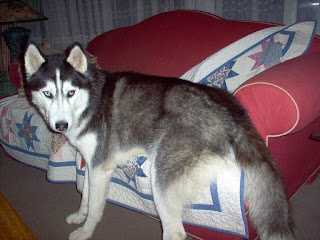 Wow! Not only did he find a clever and legal way around the "not on the furniture" rule, but he's managing to shed on some of his mom's BEAUTIFUL hand-made quilts, too! (Sibe fur adds fluffiness and warmth, you know!) This is one TALENTED Siberian!

He added that it's very, very hot in South Africa these days - they're going into Summer now. He said, "If Santa had to come and visit us with bones and chewies he would melt today!! Especially with all that red and white fur that he wears..." Then he asked, "Is he related to you Ams???" Ha rooo & wooo! No one appreciates humor quite like Ammy!

For all your efforts, McKinley - from digging to the "side bum" to a great laugh for the day, we salute you!