Ha roo, Storms here! Have you read our friends Butchy and Snicker's blog lately? They have a new friend named Toto who is a Yorkshire Terrier! When we lived at Ft. Riley, I gave birth to a Yorkie! I promised them a picture - so here I am with him: 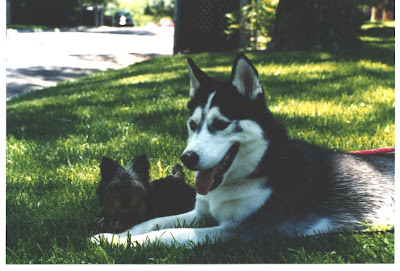 He was a cool little guy and could jump all over me, go through my mouth, do whatever he wanted to and it was OK with me. He lived behind us and I had to stop and see him whenever he came outside! This was shortly after Mom and Dad adopted me; they knew then how strong my maternal instincts are! In addition to giving birth to him, I also gave birth to a Westhighland Terrier that Summer and a mixed breed girl named Polly.

The Yorkies and his parents (and Yorkie sister) moved to Texas - but they came to visit us here about six years later. After all that time of his biped Mom calling him a "Little Siberian Husky In Training" (or a Little S... well, do the acronym yourself... we run a family-friendly blog here...) I couldn't WAIT to see what he grew up to look like! Would he be a black and white like me and Dave? Or a red and white like Am and Zim? Hmm... here we are: 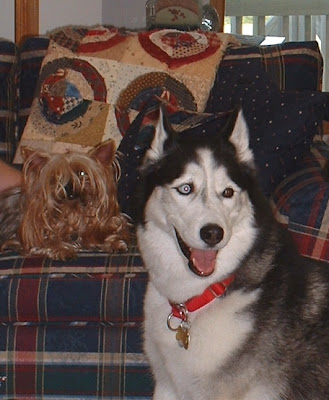 He didn't look like a Siberian at ALL! I had to admit he was a Yorkie and wouldn't really grow up to look like me, despite being a Little Siberian Husky In Training for so long. At least I gave birth to REAL Siberians (Amber, when she was 4 months old, and Zim, when he was a year and a half old) and then there's Dave. Ha roo.

The rest of the Ao4 were very accepting of my former puppy and his sister when they came to visit. We were VERY well-behaved! Here's everypup after a nice, long walk. The Yorkies were carried - for some reason, they couldn't keep up. Go figure. They also didn't seem quite as calm as we were afterwards. What to make of this? 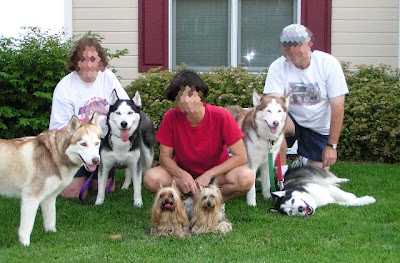 Left to right, that's Zim, Dave, the Yorkies, Amber and me. Bipeds have been fuzzed out because we didn't ask permission to post the picture. But honestly ... who's going to look at the bipeds anyway?

Tail wags,
Storm
Posted by The Army of Four at 8:11 AM