This week, our Sunday Salute is to the pup we refer to as our great uncle - Rookie!

We promised our friends Jazz and Dixie some pictures of one of the beagles in Mom's life, and thought it would make a good Salute. After all, growing up with beagles in her life is one of the things that made Mom into the puppy-lover she is today!

Mom's first beagle was Sam, and the pix we found of him are really fuzzy - we think they're from when cameras were first invented or something. Ha roo roo roo. We did find some cute ones of Rookie, though! Here he is, as a wee baby in 1973: 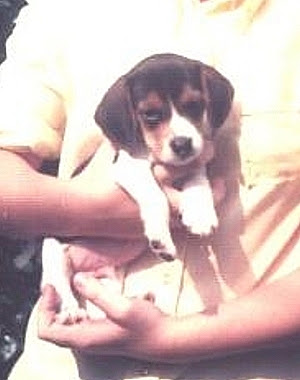 That's Mom holding him; she was just a puppy herself! She cleverly cropped herself out of the picture before allowing us to use the picture of Rookie. Hmm. Anyroo, he was born in Rockville, Maryland, and first lived with Mom and her family in Northern Virginia.

Here's Rookie a few years later, in Hampton, Virginia, when they moved there! He looks very pensive, doesn't he? 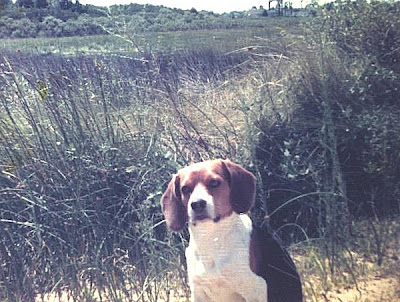 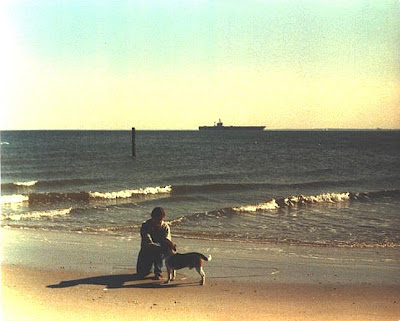 Mom was in college by then and loved to come home to her family (who by then lived at Ft. Monroe) and spend special "alone time" with Rookie. Can you believe they have a beach there called "Dog Beach"? How cool is that!?!? (Oh... and that's an aircraft carrier heading home to Norfolk, VA, in the background!) Mom was home for Christmas Break for that picture.

And here's one more shot of Rookie; here, he is playing backgammon at Ft. Knox, Kentucky, with Jackie Blue - the Siberian who owned Mom's brother and his wife! (Jackie Blue was the first Sibe Mom knew and loved!)

We're not sure who won the game, but obviously Jackie is blowing on the dice for luck! Or trying to eat them. Whatever works.

Rookie (and Sam and Jackie Blue and all the pups in our mom's puppyhood) - for teaching Mom how wonderful pups are and helping train her - we salute you!