Storms here! We'd like to call out a hearty "Bonjour" to someone who's been visiting our site from France! Bienvenue!

Yes...... in addition to my other talents, I also speak French. It's one of the many classes I teach at the Stormy Zoluschka Kryschtal School of Siberian Studies. Here's my ace student Zim, hard at work: 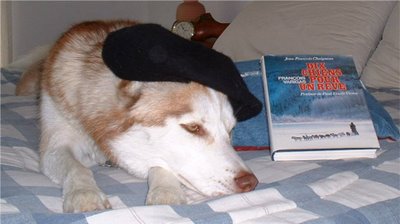 Left to right, it's Lucky (alpha black and white girl!!!), Jesse, and Booter. Anyroo, Lucky and Jesse were born in Flanders (that's in Northern Belgium) and adopted our parents when Mom and Dad lived in the southern part of Belgium. They lived there for 3 years together before coming to the States. They were the first Sibes to own Mom and Dad and really taught them a lot about Sibes. They were so good at ignoring what the bipeds told them that Mom thought maybe they spoke Flemish, since that's the language their breeder spoke to them. They ignored English and French equally. :) Mom doesn't speak Flemish. We all know full well Jesse and Luck understood English. And French. It's called being a Siberian, or that "condition" Dave has called selective hearing. Ha roo roo roo!
Here's a picture from one of their adventures in Belgium. I thought about this when I wrote my "Sled Dogs?" post the other day. Yeah..... travelling through Brugges, Belgium, the way "sled dogs" should. 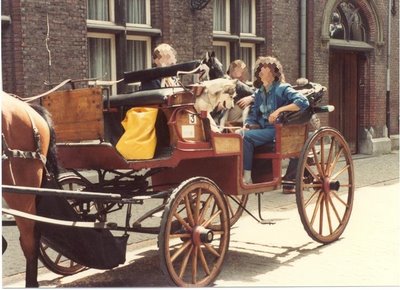 Faces have been fuzzed out to protect Mom and Dad's friend whose permission we didn't get to post her picture and to protect the innocent from remarks about 80's hairstyles. I know where my Eukanuba comes from.