Woo, it's me again - Dave. Did anypuppy see Saturday's blog? It was there for a few hours, then it went away! I should have saved a copy somehow, but didn't .... and now it's gone. Zapped out of "Siber"-space! I'm trying my best to remember what I wooed!
Mom had me and Stormy out for a walk the other day. Yeah, the day we saw the Giant's cat, in fact! We were walking down the street when Stormy thought she saw somepup we knew!
"Hey, Dave! Check it out! I think it's one of the Dachsies from DWB!"
Woo, how cool! We went over to check him out - the little guy was out in his garden all alone!
"Hey, little fella! How are you doing?" Storm greeted him.
But he didn't have anything to say. At all. He didn't even bark a "hey!" to us. In fact, he was kinda a stiff, so we knew it wasn't one of the Dachsies we know! But Storm's real social, so she kept talking to him.
"Do you know Sammy? Or Roxie? ... how about Andy?"
He still had nothing to say! He didn't even sniff back when Storm gave him a sniffie! After she checked him out, Storms told me he was stoned! Or... maybe she said he was made of stone. It was one of the two. 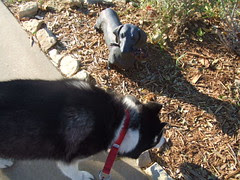 Not the lead dog Marvin blogged about, but in the same category, I think. At any rate, this guy was a real stiff. I wish it had been Roxie, Sammy or Andy! They're TONS friendlier!
Luv,
Dave
Posted by The Army of Four at 9:53 AM