This week's Sunday Salute goes out to our friend Rocky, of Falls Church, Virginia! Remember a few weeks ago when our bipeds had some friends over? We helped Mom clean the house beforehand and the guests brought us a cool gift basket with toys and cookies and stuff? Yeah! Rocky owns the man biped who came over!

We've heard all kinds of great things about Rocky, most remarkably his ability to open the magic cold box. (We're also secretly hoping here that if enough pups leave comments today asking him, that Rocky will share with us just how he manages that. None of us can do that here. Amber knows how to get ice out of the coldest part of the magic cold box... but that involves doing the Sad Eyes Look at Mom.) Rocky also devoured an entire village one time - a gingerbread village that was behind a closed door. Yes, this is a pup not only deserving of a Salute but one we need to hear from him more often!

Rocky sent us these pix last weekend. He told us,

"After a very long day of raking leaves, Daddy told me to go lay down on my sofa so he could fix the boo boo on my leg. I just closed my eyes for a few minutes... 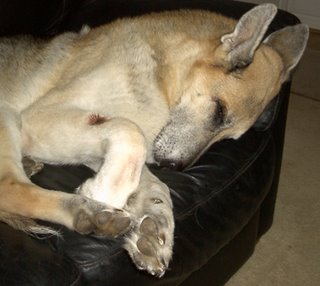 And then when I woke - I could smell that antiseptic that Daddy likes to use on my hot spots and I had a bandage with my favorite paw-print design. But I figured I best get some rest - for tomorrow morning's long walk!"

Poor Rocky! What a hard working pup! Given the gift basket and all, we'll cut his dad some slack for taking advantage of Rocky's exhausted state to bandage his leg. He said his dad was going to get pictures of him raking leaves but he forgot, and added that he's such a good helper in the yard! I'll bet he IS!

I asked him about his owie and he said it isn't too bad and that he gets them all the time. :( He said, "This one is just a bump I started to lick." I hope it's all better by now, Rocky!

About photos, he said his dad's always snapping pictures when he's trying to sleep. There's a real epidemic of that going around, isn't there?!?! We hope to have more pix to update our Salute!

Rocky was even on the cover of a quasi-local publication called "Animal Chatter" - kind of a free advertising publication. It has his story and everything in it, he told us!!! He's going to try to scan it and send it in to us. Hey, any pup who can open the magic cold box certainly can use a scanner!

Rocky also sends a big "AHRooo" to everyone!

For all you do helping your dad, putting up with bandages on your owies, and the many talents your possess, we salute you, Rocky!
The Army of Four

p-Update: Rocky just emailed us a shot of the magazine cover he was on! Here it is, with a short bio of Rocky, too! 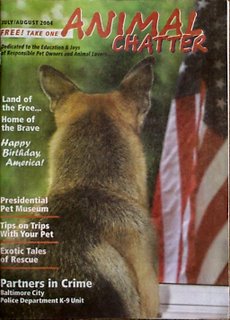 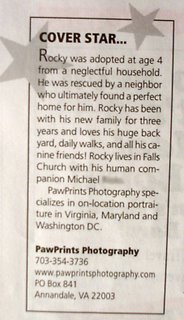 Tail wags ~ SZK for the Ao4