That's right, pups, there's been a coronation right here in Kansas! And a coup. And another coronation. WHEW! It's been wild!

Ha roo, everypup, it's me - Zim. Wowzers, do I have incredible news to share! It involves some guy named the Kaw King. I think it might have to do with that Johnny Kaw guy that I reported on a long time ago. Here's what's been going on:

A couple weeks ago, Mom said the Kaw King had to be replaced in the Master Bathroom. Now, that seems like an odd place for a coronation to me, but I've heard some people refer to there being a throne in there ... so who am I to argue? I think it's behind me here, as I'm doing my "Super Zim" pose: 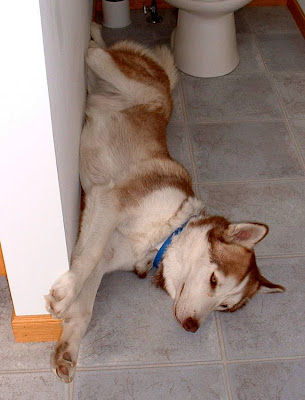 Anyroo, so the Kaw King was replaced a couple weeks ago. I think Mom had something to do with it. Then this weekend, Mom and Dad were doing all kinds of projects, like replacing electrical outlets outside, and Mom said something about having to admit that the new Kaw King wasn't working out. Dad agreed. So somehow, there was a coup, and Mom ousted the old Kaw King. Whoa! Don't mess with Mom! I came into the bathroom at one point to see if I could lend a paw, and this is what I saw: 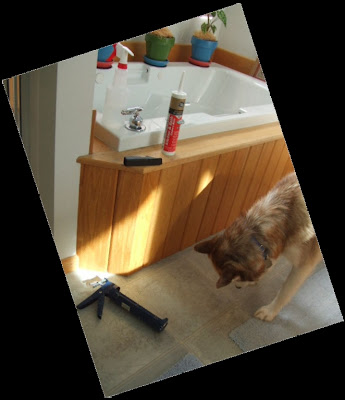 Hey, Mom! What's this thing on the floor?

She said it was the Kaw King's gun. WOWZERS, you wouldn't think he'd leave something like that laying around, would you? Mom said it wasn't loaded, though. I wonder how Mom got it away from him? How cool! 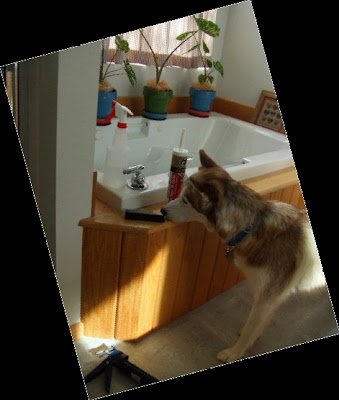 What's this other stuff?
I wanted to check everything out and make sure Mom was OK. I think maybe Mom saw my post the other day about how I helped out when Abrush and Aroller were here, though, 'cuz she started muttering all kinds of stuff about how her first clue that the first new Kaw King wasn't going to work out should have been that it cleaned up real easily with just water and how maybe I shouldn't help with the new Kaw King. I was a tad concerned about her at that point; I didn't see the King anywhere! Nothing she said made any sense to me! But she went on about this new Kaw King being really hard to get off of anything and she didn't want it on "somepuppy's snooter" (wonder who she meant!) and said, "Excuse me, please," which is how Stormy trained her to ask us to back away. Fine. I had other things to do, anyway. 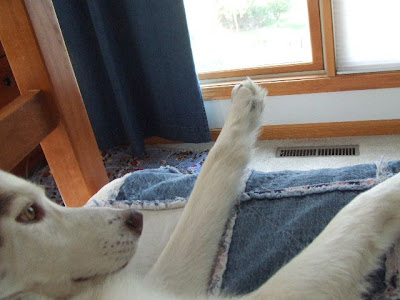 Me, moving on to another important task

So... the Kaw King who was installed a couple weeks ago is gone and the new Kaw King is in place. Mom said today will be the big test to see how he does in hot water.

The King is dead; long live the King!