Zim - Interviewed by the Tube Wolf!

Ha roo, everypup! It's me - Zim! I had the pleasure of being interviewed by one of my most favorite Siberians - Tubey! It was cool! Have you seen these interviews going around siber-space? Very cool. Let's get started!

I'll put Tubey's words in bold-face italics, so you can follow along!

Question time! I'm going to address these questions to Zim, but anyone can pitch in.

1. Why are humans so stupid?
Wow. Starting out with a tough one. I asked Stormy for help. She responded with a quote from some guy named Orwell -- "Four legs good; two legs bad." She thought that summed it up. I'm not sure, but I think I also have a new reading assignment for Literature class at the Stormy Zoluschka Kryschtal School of Siberian Studies.

2. Tell a story of Siberian destruction, please.
Oh, this is a cool one. You've heard our favorite one about why Mom can't leave Kansas. Like that, this happened a long, long time ago, before Dave joined us. Mom had her Quilt Group here for the first time since I had joined the family. Storms and Am said, "Ha-roo!" to everyone, then went and laid down somewhere. Not me! We had visitors! I had to entertain them! I'd never met "the quilt buddies"! They insisted Mom let me stay and socialize. This one lady smelled like a year old Flat Coated Retriever, so I especially wanted to get to know her. In fact, she was cutting out little fabric "hands" for some little dolls or something. They were about an inch by a half an inch. About the size of small grasshoppers! Mom is always saying she needs a hand with things..... so I just acted all calm and schmoozy to She-Who-Smells-of-Retriever... then zoomed in and grabbed a couple off her lap and ate them. Mom tried to catch me and take them away, but they were too tasty and I was WAY too fast! (Oh, sure ... I gave them back eventually..... if you guys know what I mean.) Anyroo... for some reason, Mom asked Stormy to get out of the carrier after that and put ME in there. We used to have the door on it, back then. I couldn't understand it. I was just trying to help! Mom said it was lucky for me that She-Who-Smelled-of-Retriever found the whole thing extremely funny and was laughing and crying, "Zim ate my hands! Zim ate my hands!" The whole group laughed so much, they didn't get much quilting done... but I'll bet it was the most fun they had at a meeting. It was a great day! Ah........ sweet memories!

3. You all work so hard, do you ever go on vacation?
True, Tubey. As you know, Siberian Huskies are members of the Working Breed group. Our work is never done. 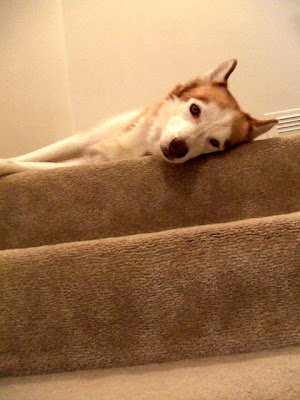 Me. Zim. Siberian Husky. Member of the Working Breed Group.

In order to combine work with some recreation time, I'm working (ha roo roo roo) on a plan to get an ocean here in Kansas - and a mountain, too. They both sound like a ton of fun, and I really think we'd like both. Perhaps we could put the ocean between Kansas and your home state of Missouri, so you can have one, too! Then every day will be like a vacation!

4. I recall that one of you is not only in the Army, but also a Marine. I think it is Dave. What's the story?
Good memory, Tubes! Yeah... that Dave! He's got an interesting past! When he joined us, he turned the Ao3 into the Ao4. But when Mom tried to get him to say "hooah!" like a soldier, he kept saying "hoooh-rah!", more like a Marine. Very odd. Very odd indeed. Stormy said Dave must have been a Marine before he joined the Army. Of Four.

5. Have you ever gone swimming?
No, not yet. But once I get that ocean thing here, I will!

Thanks for the interview, Tubey! That was fun. And I feel totally honored!

Who's game to be interviewed by me!?!?