Sunday Salute - Sibes in the US Military! 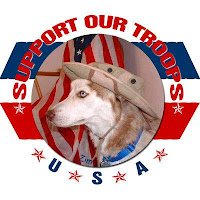 This week, our Sunday Salute goes out to Sibes who have served in our nation's military! We used to help our mom write a column for the Historical and Archaeological Society of Fort Riley's newsletter. The column was called "Ask the Docents", and we answered any questions about Ft. Riley's history or military history questions. One month, we fielded the question, "Did Siberian Huskies ever serve in the United States Army?” The short answer is “yes”, and we would like to share that information with you now!

Described as a working dog with high intelligence, it was only natural for the military to put the Siberian to use. Initially, the Siberian Husky was tried as a sentry but our friendly, gentle temperament made us Sibes unsuitable as guard dogs. We look the part, but we are born people-lovers! The Army therefore decided to use the Siberian more in keeping with our heritage – as sled dogs who love people!

In the fall of 1942, the Quartermaster Corps began a training program to provide sled dogs for search and rescue missions. The Siberian’s athletic ability, combined with our compassion for man and alert demeanor made our kind ideally suited for this work. The sled teams’ missions were to organize search and rescue groups to recover downed pilots and cargo, and to remove/pull casualties from the battlefield. The speed of these Sibes helped rescue and save those men who were injured, freezing or starving. Way to go!

During WWII’s Battle of the Bulge, hip-deep snow and higher drifts hindered ambulances and stretcher bearers from reaching fallen soldiers. Lives were being lost due to the delays and Siberians were called to duty! C-47s were dispatched to the Arctic to pick up and transport over 200 sled dogs to the battlefield; four days later, the dogs and drivers arrived in France. A remarkable record was set getting these dogs in, but despite the efforts, they were not used – the weather had cleared and the snow melted. As one musher put it, the record was for the “most sled dogs assembled at one point, and not used at all.” Can't say they didn't try!

Siberians did participate in many rescues in the Arctic, Greenland and Labrador. In Greenland, the teams were routinely sent out to bring back AWOL soldiers; the dogs were a big draw for the men and were used as somewhat of a lure. In addition to bringing out injured soldiers, Siberian Huskies also brought out top secret equipment to protect it from falling into enemy hands. Siberian Huskies were used by the US Army Combat Engineer Corps for transportation of men and equipment during the construction of the AlCan (Alaska-Canada) Highway! How cool! No pun intended. Well, perhaps it is. Ha roo roo roo!

We thought it was a great question! We are really proud of our Siberian Husky ancestors who have served! Sibes of the US military, we salute you!