Tail wags, all! It's me - Stormy. I just have to share with you a news story from our local area. It was published on 11 October 2007. Talk about being in the right place at the right time ... for the canines and the police, anyway. Ha roo roo roo!
Suspected Burglars Caught in Kansas — By Mary Kaye Davis
JUNCTION CITY, Kan. — Several lucky breaks for police Wednesday in Junction City, Kan., led to arrests of the two men wanted in connection with two burglaries in Mt. Vernon and Perry County. Derek Breazeale, 28, and Joshua Snyder, 20, were arrested around 1:40 p.m. in a wooded area near Junction City, which is about 130 miles west of Kansas City, said Capt. Tim Brown of the Junction City Police Department this morning. The two men allegedly burglarized Bob Evans and Long John Silvers in Mt. Vernon on Friday and early Saturday morning. According to Brown the two men and two women were traveling down Interstate 70 near Junction City in a Suburban they allegedly had stolen from a home near Pinckneyville. An officer was along the road running radar and turned around on the interstate to stop the speeder. Breazeale, who was driving the Suburban, mistakenly thought the officer was attempting to pull them over and panicked, Brown said. “He drove the Suburban into the ditch and across an on-ramp,” Brown said. “They then abandoned the vehicle at a truck stop because it was disabled. They all jumped out of the vehicle and ran.” Brown said the two women were apprehended a short time later, however, not before one woman broke into a storage locker at the truck stop and took clothes to try and hide her identity. Brown said he didn’t have the names of the women immediately available, but they were from Kansas. Breazeale and Snyder continued to run, ending up in a wooded area about a quarter of a mile away, Brown said. “Luckily we were having a K-9 convention in town and there were at least 10 dog teams in the area to help us,” the police officer said. “We also called in aircraft to search, along with six other law enforcement agencies. The dogs really helped. They were just a Godsend. When we were talking to them after they were arrested they said that they just kept running from spot to spot but everywhere they went there was a dog team so they eventually gave up.” Brown said the men were arrested without incident. “They were pretty spent from running so much,” he said. “They didn’t have any energy to put up a fight.” Brown said that during a search of the vehicle ammunition was found, but no weapons. Breazeale and Snyder were arrested in Kansas on charges of possession of stolen property, obstruction of justice and on a burglary charge for burglarizing a residence in Manhattan, Kans., Brown said. He will face those charges first and then extradition hearings could begin for their Perry and Jefferson County charges. “Everybody wants them,” he said. “Everybody was calling about them.” Mt. Vernon Police Chief Chris Mendenall said this morning that he was aware of their arrests and would be in contact with Kansas officials later today. 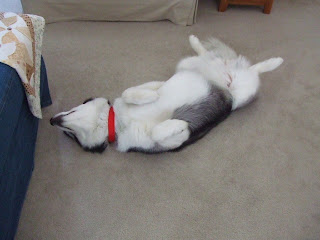 This has got me rolling over with laughter! Way to go, police pups! Ha roo roo roo! I've gotta go tell Amber this one!