Tail wags, everypup! It's me - Stormy. I called a meeting of the Ao4 the other evening out on the deck. I wanted to brief everypup up on adding more members to our roster of Troopers in the Ao4. I called everysibe to attention, told them to sit, then told them to do an "eyes left" - Sibe-style, naturally. Now ... I ask you ... look at this photo: 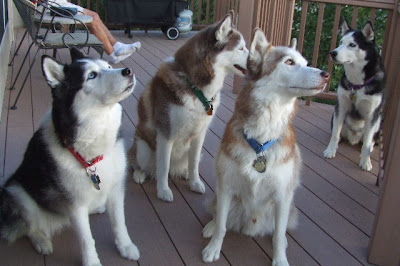 Is it just me, or is a certain Labradave out of synch with the rest of us? Sigh.

We're spending extra time doing drills to get him straightened out. I'll get back to you soon about augmenting the Troopers in the Ao4 list. In the meantime, let me know if you'd like to be added (if you aren't already a Trooper) and if you are .... get in step!