Ha roo, pups! It's me - Stormy! I'm going to fill you in on the rest of our visit with the wonderful Mala-moms today! Before I get started, though, Dave sends his thanks for all the birthday wishes. He had a great day - we all got to go on an extra walk! It was wonderful! I hope he enjoys being 10-ish as much as I did!

Now ... where were we? Oh, yes... the Deeve had just shown you his cool license tag with Holly's name on it. 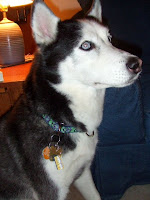 He loves that tag. Mom might have to take it off his collar and put it somewhere special for him, though - she doesn't want him to eat it. Not that he'd do that or anything. Ha roo roo roo.

OK ... so ... after we did our best to entertain Holly's mom and Summi's mummi (that just cracks me up!), Mom wanted us to pose for pictures. Umm... OK. The Mala-moms sat on the ottoman and Mom tried to get us to gather around them. Dave was the first to get into position: 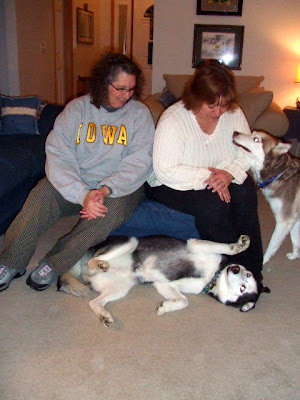 Here's my tummy, if you'd like to rub it!

Note Zim (AKA the Zimstigator) is coming in for a sneak attack on Hollybollyboo's mom. 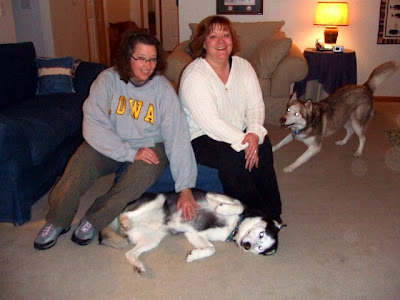 He was play bowing and "ha roo roo roo"ing, as is his want. Am and I got into position ... 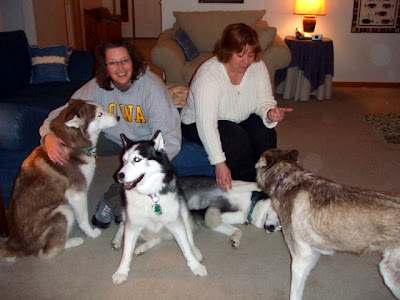 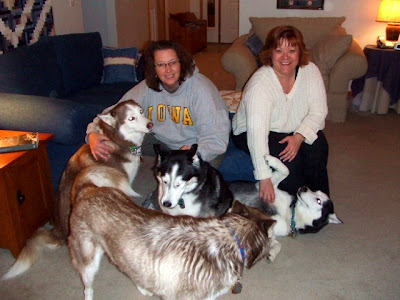 But he wouldn't settle down; I had to go grab him! 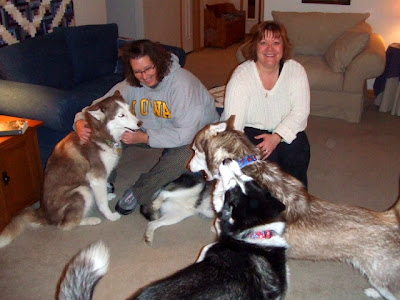 Notice how amused Holly's mom is! We really did a good job making her and Summit's mom smile! I got him out of the way so Mom could get a good shot of the Mala-moms and Dave. Amber cleared out on her own; she's very thoughtful. Here's a cool action shot of me! 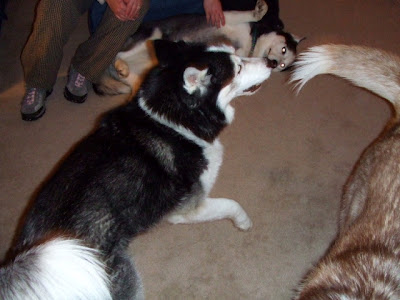 And here are Summi's mummi, Holly's mom and the Deeve. It's the "money shot", as they say. 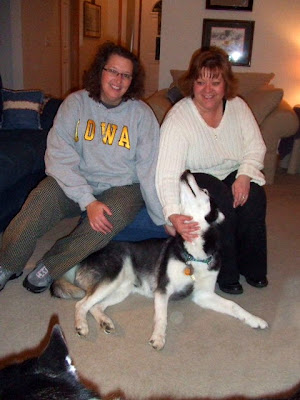 I love you, Holly's mom! And you, Summi's mummi!

Those are my ears in the foreground. I was still herding Zim out of the way. A Supreme Commander's work is never done!

That's about it, pups! Be sure to check Holly's and Summi's blogs to see their pictures of the great rescue mission their moms went on!