The Story of Barbara Walters

Ha roo, pups! It's me - Stormy! Remember a couple of Sundays ago when I mentioned that I can say "Barbara Walters" in Human English? I meant to get back to you about that earlier ... but you know how that goes. Anyroo... kick back and get comfy ... it's story time! 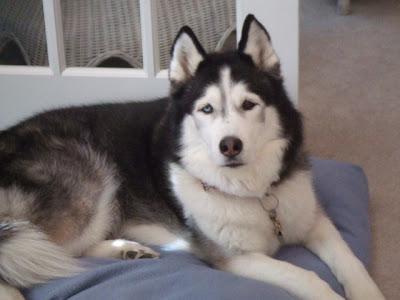 This happened years ago - before Ammy and the boys joined the family. It was just great-brother Booter, Mom, Dad and me. Booter was really great at alerting us of intruders or other important stuff outside by barking - he was a Black Lab/Australian Shepherd mix and was a great protector! (We alert the bipeds to things, too, but do it by silently staring.) Booter was great at getting their attention! Here he is -- handsome, don't you think? 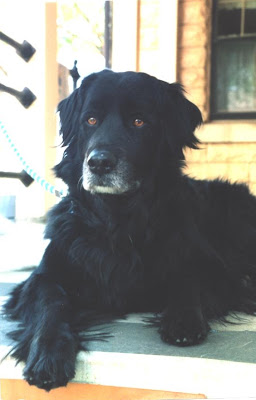 One night, Booter started barking like crazy at something out front. Mom hooked me up to go out to investigate. We got outside and stood quietly in the yard - looking and listening. Before we knew it, a coyote dashed across the street and ran off!

Mom and I went back into the house to report to Boots and Dad. Dad asked what all the excitement was; I sat right in front of him and at the exact time that Mom said a coyote was out there, I said, plain as day, in perfect Human English, "Barbara Walters."

Dad was a bit surprised, as he'd never heard me speak Human before, but he looked at us again and asked, "Well, which was it? A coyote or Barbara Walters?" I said "Barbara Walters" again ... so they assumed the coyote's name was Barbara Walters. Ha roo roo roo!

I've said it for friends of Mom and Dad's - but only if I feel like it. Mom can ask me, "What was that one coyote's name? You remember her, Storm. What was her name?" And if I'm in the mood, I'll tell her. Barbara Walters!

Until next time!
Tail wags,
Stormy