This week, our Sunday Salute goes out to our friend Rocky's dad, Mike! Oh, we know, we know - he's a biped. We promise to not make a habit out of this - but he's one biped worthy of a Salute! As frequent readers of the Ao4 Digest may remember, Rocky is a German Shepherd friend of ours in the DC area. He's about 10 years old and his dad has often considered getting him a brother or sister. Here is a picture of the two of them. Rocky is the one on the right. Ha roo roo roo. 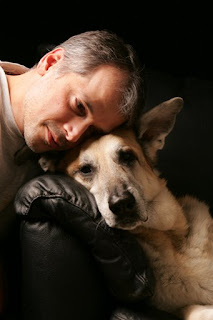 Mike (the biped) learned that a colleague of his at work wanted to re-home his husky-mix pup, Mati. Mati's story tugged at his heartstrings. He carefully considered all the pros and cons to the adoption, talked at length with her "owner", even wrote our bipeds about it! Most importantly, he thought about the Rockstar! How would the potential adoption affect Rocky? Would he still know he's the #1 pup in Mike's heart? Would he like having Mati as a sister? 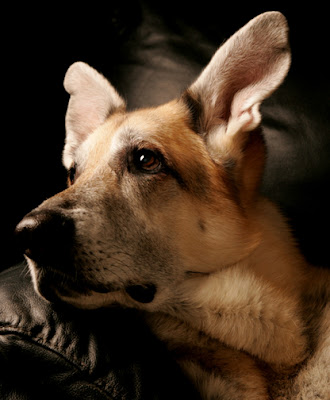 This picture above isn't really from one of their adoption-discussions, but it could have been. Rocky is clearly a pup deep in thought. "A sister? What kind of sister?" 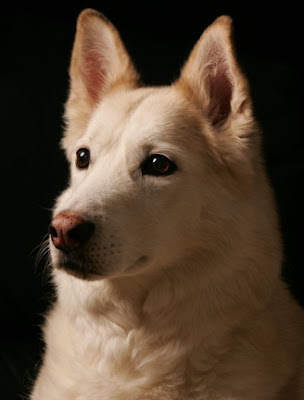 It's easy to see how she captured Mike's - and Rocky's hearts! Mati and Rocky met a week ago today; the rest, as they say, is history.

From everything we've heard, she and Rocky are doing great together. Mike knew our great sister Lucky; she taught him a little bit about what being a Siberian Husky is all about. And we got to meet him a while ago, and worked our charms on him. There is a lot to learn about the ways of the husky. :) We can be a bit ... trying.

You can follow Mike, Rocky and Mati's adventures on their blog, Rockstar and Company. 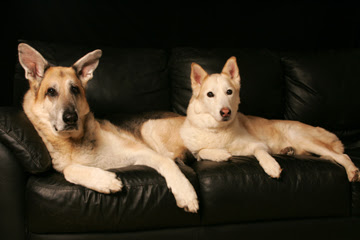 Rocky and Mati at home!

Mike, it takes a very special biped to adopt a 12 year old pupper. For all you already do for Rocky and for adopting this very special Mati girl .... we salute you!