Hey, pups! Tail wags! It's Stormy here! It's actually stormy here, too ... but that's another story. My Zim posted a great recipe (and an even better story behind it!) yesterday and on behalf of the Ao4 and our mom, thank roo for all the kind comments! A couple of the items mentioned presented a little language gap challenge. Consequently, our dear friend Marvin wanted to know, "What is a Dutch Oven? Is it what we call a casserole dish? What is Cilantro? (Jeannie thinks it is what we call here, Coriander??)"

Great questions, Marvin! The English language is used so differently in different parts of the world, isn't it? Let's get on these!

I was going to let Amber answer the query about the Dutch oven, but then I looked over her shoulder during a web search she was doing for a graphic. She looked up ovens, then made another entry I couldn't see and hit on this one:

She wouldn't stop giggling. I think she was going in the wrong direction, Siberianly speaking. AND she's obviously still fixating on Oswald. Anyway, you can use your imagination to figure out where she was headed with this one.

Back to the Dutch oven issue. Have you ever been to the Netherlands, Marvin? No, just kidding. Ha roo roo roo. A Dutch oven is a heavy cooking pot with a tight-fitting lid. As per why it's called a Dutch oven ... Wikipedia actually has a great write-up:

During the late 1600s the Dutch system of producing these cast metal cooking vessels was more advanced than the English system. The Dutch used dry sand to make their molds, giving their pots a smoother surface. Consequently, metal cooking vessels produced in Holland were imported into Britain. In 1704, an Englishman named Abraham Darby decided to go to Holland to observe the Dutch system for making these cooking vessels. Four years later, back in England, Darby patented a casting procedure similar to the Dutch process and began to produce cast metal cooking vessels for Britain and her new American Colonies. It is possible that because Darby’s patent was based upon his research into the Dutch foundry system that the cooking vessels he produced came to be referred to as “Dutch” ovens. Other researchers believe that this term may have come from the itinerant Dutch traders who sold cooking vessels out of their wagons as they traveled from town to town and door to door. Maybe both accounts are true. In any event, the term “Dutch oven” has endured for over 300 years.

They also have some photos of Dutch ovens at the link above. What we Americans call "casserole dishes", to respond to the second part of your question, are normally glass, pottery or ceramic-type covered baking dishes. The term also refers to the food item cooked in the casserole dish. That's a wee bit confusing, isn't it? "I cooked a casserole dish in a casserole dish." Amber would have a field day with that one! Anyroo... here I am with our Dutch oven. 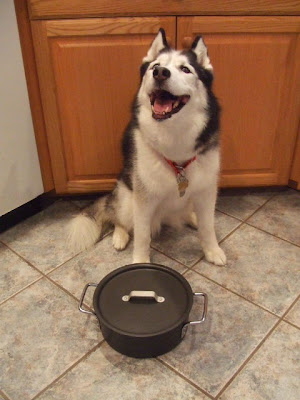 I was thinking about Amber's web search, and couldn't help but laugh. She is soooo funny!

The cilantro question is another great one! Jeannie is right, cilantro and coriander are from the same plant! Cilantro, or Chinese parsley, is the name given to the leaves of the coriander plant (Coriandrum sativum, Marvin!), while both the plant and the seed-like "fruit" are traditionally called coriander.

Cilantro is used as a garnish in a lot of Southeast Asian food, and as a key ingredient of Thai green curry paste. In Mexico and Tex/Mex cuisine, it is used in salsa and guacamole. It's also used in many different chutney dishes! It's in all kinds of wonderful treats! There is a good image of cilantro at the Gourmet Sleuth link. Mom tried growing some a few years ago, but as it gets a little tall, our winds really did a number on it. She wants to give it another try!

I hope that clears things up for you, Marvin! They were excellent questions; thanks for asking!